I’m ashamed when I re-read all my release with Zero-day EXP as a translator.

I will slowly re-translate all of them.

And thank you, Editors and readers, for keeping up with me in the last 2 months.

I will make all of my release a little better.

I was surprised at the scene when I woke up.
I had fainted on the street from a blood-sucking impulse.
I thought that I might be dead, but it seems I’m still alive.

Although I’m still thirsty for blood, I don’t feel that uncomfortable anymore.
Looks like my bloodthirsty has calmed down for now.
Was it because I fell asleep?

Right now, I’m lying on a bed.
Moreover, it isn’t a hard bed like the one in the ruins, but a soft and fluffy bed.

(Ah… What a soft and warm bed…
I love beds.
It seems like I was sad.
It seems I’ve missed you) (Arge)

“Hah…
I want to marry a person who allows me to sleep in this kind of bed in the future.
Of course, with three meals and snacks.” (Arge)

I heard a girl’s voice.
I couldn’t just ignore her so I turned around to that voice’s direction.
There aren’t many types of furniture, this’s just a simple room.
The said girl was sitting on a wooden chair a little away from the bed I was sleeping in.
A young woman with light brown hair.

Why does everyone always complain when I name them?
Even though I’m always considering their characteristics when I pick their name.
She is a young lady with big breasts and two-colored eyes.

So I call her “Odd-Eyes Boing”
Besides, I still don’t know her name yet.

It’s rather inconvenient for me to have a conversation with her.

Unless she tells me her name.

“Well, I 『noticed』 you sleeping on the street and you didn’t wake up even I called.
So I carried you to my home.
By the way, my name is Felnote Lyria, you can call me so.” (Felnote)

“Okay, I am Argento Vampear. You can just call me Arge, Felnote-san.” (Arge)

And then Felnote-san got up from the chair, she had a big sigh.
Her breasts shook a bit according to her movement.
Apparently, she seems to be making tea. But…. 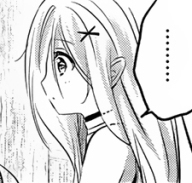 Something was wrong.
Felnote-san’s movements were stable and certain.
I can understand from the way she uses tools for making the tea that she was quite accustomed to this.
Even so, something was missing.
There was an unnatural feeling in her movements.
I continued observing for a while and finally found out what missing.

…This person… She is making tea without looking at her hands.

Normally, when you do something, you look at your hands.
Even if you are familiar with it, when you use your hands, you usually look at your fingertips.
Because if you don’t, it is possible that you get injured even with something simple like making tea or cooking.

And Felnote-san didn’t do it.
Her neck wasn’t bent, her face was looking straight to the front, and tea was brewed when she isn’t lowering her eyes.

“Here, please drink it. Because it comes with herbal medicine, it’s good for recovering your health.” (Felnote)

I looked into her face while she was giving tea and got the reason why her gaze did not move.
From my side, Felnote-san’s two-colored eyes were purple on the right and gold on the left.
In other words, her left eye is purple and the right eye is gold.
Both of her eyes had no light.

Clearly, neither eye is in focus. 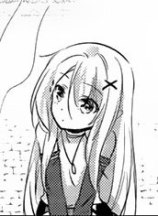 “Yes. A few years ago, when I was fighting against a certain demon … at that time…” (Felnote)

I see. It wasn’t that she didn’t need to look at her hands, it was because she couldn’t see in the first place
I drank the cup of tea for now, and then I asked her.

“Can’t you cure it with healing magic or medicine?” (Arge)

(T.N: The skill name “Recovery Magic” just like a class. When you reach a certain level, you can use its spells like “Healing”, “Cure”, “Dispell”,…)

“Sorry, can you come a little closer?” (Arge) 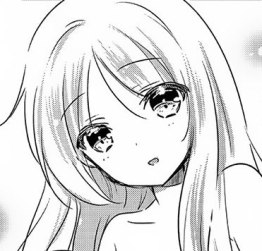 Felnote-san moved her face closer to me.
She could not see me, so I touched her face to tell that she was close enough.

And when I touch her…
…Oh, her skin is smooth.
This is the skin of a woman.
Well, I am also a girl right now, but I still feel flustered.
Let’s treat her politely. 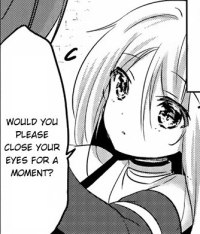 When I heal her and she suddenly sees the light, she may be surprised.
That’s why I had her eyes closed.

… She is a nice person.
She helped the strange collapsed person even she’s blind

And now she listened to what I said obediently.
She was a good person and she helped me.
Also, it is a bit unpleasant when I get helped and owe her a favor so I would like to return the favor with eye treatment.

… It would be nice if everything goes well.

With『 Recovery Magic』skill, there are various spells such as heal wound, remove scars, remove curses and poisons and even clean dirt on the body…
If it is a simple scratch, it can be solved with magic to heal the wound.
But her eyes have no wound, in other words, her eyes were losing light for other reasons like a curse.

“Please cure her eyes and let her see again” (Arge)

It was a clumsy chant.
But to use magic, I don’t need a long-chant but only need to image the result and use the magic power with『 Recovery Magic』.
A『 Recovery Magic』spell to counteract the curse … is it better to call magic spell? Well, whatever…

And I cast it on Felnote-san’s eyes.

… It looks like it was successful.
Even if she closes her eyes, light still comes through somehow.
If she can recognize it that means her vision has returned.

Felnote-san felt nervous as she opened her eyes.
Her two-colored eyes that appeared in my sight wasn’t dark shade like before.
Recognizing the light, recognizing me, her pupils were swaying.
Good. Her eyes seem to be healed properly.
After all, the blindness was caused by a curse.

“It seems your eyes has been cured” (Arge)

“I couldn’t see for years.
I have already given up …
thank you…
Thank you very much, Arge!” (Felnote)

“No, I must be the one who says thank.
Thank you for helping me before.” (Arge) 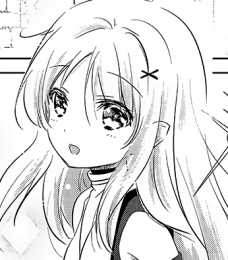 If I don’t return her favor, I can’t feel easy and I won’t be able to sleep.
I am a lazy person, but I’m the type who’d like to do things properly.
Felnote-san strongly gripped my hand.
It is a little painful.
But it’s fine I guess.

I don’t know how many years she hadn’t seen in detail, but it seems that she had blinded for quite a long time.
With how she could even brew tea, I can imagine that she had been through a lot of hardships.

“I can’t simply say thank you with favor like this…
Such a thing…
Is there anything you want?
If I can do it, I will do anything!” (Felnote) 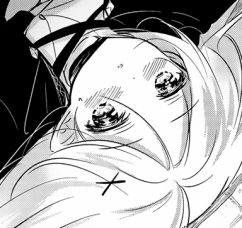 I was a little surprised because I was pressed with a tremendous force.
It seems like she pushes me down on the bed.
The bed was soft and fluffy so it didn’t hurt, but this appearance may be bad.
Her two-colored eyes were serious. But she overlooked this.

If a third party sees the situation we are in right now.
It will definitely create a misunderstanding. Even we are both girls.

After sleeping, my blood-sucking impulse has been settled so far.
But if she gets too close like this, she will make me want to bite her.
As I saw her slim neck, I felt like she was really tasty.
I am a dangerous person now.

I pushed Felnote-san’s shoulder lightly and got away without hurting her.
… Even so, It’s surprising for me to use a girl’s voice.

I said “Kyan”
Since my body right now is a girl, it isn’t wrong to have that scream.
But it feels a bit unnatural.
It is a bit different from what I normally feel …
It’s kind of embarrassing. Kinda like itching.
It’s that sort of feeling.

“I’m sorry, but I don’t mind if you need me to do something, this is a big favor after all” (Felnote)

As for me, I am just trying to return a favor and I think that’s enough.
As it was, if I was left alone in the alley, I would have been dead.
And right now, I even get a warm bed to sleep in.
Because she had saved my life, I return the favor by curing her eyes.

However, it seems that Felnote-san was not convinced.
Although I looked away as she asked, her gaze remained serious without changing.
As for me, I want to take a nap with this fluffy bed soon and it’s getting harder to sleep when I have a serious face in front of me.

It is true that “it” will bother me if I do not solve “it” quickly.
There is also the possibility that I will die when I have the next impulse.
I have not heard that the vampire is such a disadvantaged race, Loli-Gramps.
Next time we meet, please take responsibility and take care of me forever.

“Uhm… Can I say something funny?” (Arge) 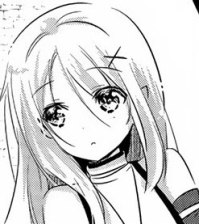 “Yes, whatever you say” (Felnote)

“Could you give me some of your blood?” (Arge)