「The Principle of a Philosopher by eternal fool “Asley”」

“Oh … it’s different …
Why did this happen ….
I understand that the magic of transparency will keep disappearing without setting a time limit, but magic the time limit formula
Why is it to be translucent when it is incorporated in the pattern?
Well, is that the balance of the magic pattern collapses when doing so? …
Does that enlarge the transparent maternal magic pattern to keep balance
No, it makes no sense because the official magic letters in the first place increase proportionately …
Hmm … … I do not know … ” (Asley)

(T.N: Don’t ask me why It doesn’t make any sense, I hate sciene and detail explain)

“What was that, Pochi? It’s only about 80 years since I got into this dungeon, isn’t it still too early to go outside?” (Asley)

“Pochi” is a breed of dog called Siberianne · Husky.
About hundreds of years ago it became my familiar. And since then, he is like my friend and caretaker.
Recently I’m in trouble because I’ve got more quizzes everyday.

“It’s not just 80 years!
It’s been about six hours when I got out of the last time!
Did you remember the time before that?” (Pochi)

“Oh …… Oh, I was doing research to engrave fluoroscopic magic on glasses!” (Asley)

“It’s not about research issues, what I would like to ask is the time spent in that research!
It’s 120 years!
We are a total 200 years away from the outside world!
Don’t you feel like go outside a little?” (Pochi)

Pochi sighs as he is amazed. Apparently he seems to hut the limit soon. It is easy for stress to accumulate.

“If master succeeds in the research, you will just move on to another research …
Master … No, Asley.
I will say this as a friend, but you better live more of a human life.” (Pochi)

Each time Pochi speaks a word, his voice becomes stronger.
I wonder if he really seriously care about me.

5000 years ago …
By accident, I succeeded making the medicine “Eternal Drop” at the age of seventeen years old.
I drank it, my body became an immortal.
It was the first and the last miracle that I had because I was not that talented as a magician or an alchemist.
I got the special benefit of eternal time.
I spent a long time training and devising magic.
I don’t have talent so an easy magic took me months to memorize.
So even I keep researching and learning for the past 5000 years,
I was growing as fast as the turtle’s step.

I grew up doing a lot of research and training.

And at one time I found a small poach and its mother who was attacked by a monster.
I killed the monster using “Ice launcher” that took me over 8 months to learn,
but I wasn’t able to rescue Pochi’s mother.
I can’t forget the face of Pochi crying in front of his mother’s tomb that day.
Then a happy life with Pochi began.
He was smart, understanding, friendly and simple instructions quickly.

But I knew that happiness by no means would last.

Yes, I can live for eternity, but Pochi ends in about several dozens years that time barely enough for me to do research.
I explained about the “Eternal drops” which is only half left to Pochi, and asked him to drink it.
Pochi was smart, he was hesitant to drink, and I was worrying.
Well, in my case, I was drinking before noticing it.

With my foolish mistake,
I seemed to have put the”Eternal Drops” way from the desk full of research materials,
and it got into Pochi’s feeding bowl.
And, more stupidly. It took me about about fifty years for me to notice that.
I saw the desk where the small bottle of “Eternal Shizuku” felt. And looking at Pochi, who still healthy after all that time.
And what Pochi told me from that … “It was fun to be honest”.

It wasn’t long since Pochi became a Magic Wolf.

“Hey Master, have you forgotten why you are deeply involved in research? You will use wonderful power to help the world, didn’t you say so?” (Pochi)

“Oh, I was saying that because they were looking down on me, but about the goal is already changed when I noticed that there are no reasons for them to be alive five hundred years ago.” (Asley)

“Too bad, Master is overdoing it! I don’t admire it. But you still haven’t used any fluoroscopic glasses you made for perspective!” (Pochi)

Of course. It is certainly a bad habit, I want to see the fruit of my research after making it.
I have not seen the world recently, and I think that it is a good opportunity.

“But you was pretty low level Pochi.” (Asley)

“I was exercising outside unlike the master, where did you think we get food from?” (Pochi)

“Nununu … um … there were appraisal glasses made with by-products of perspective eyeglasses!” (Asley) (T.N: Scouter) 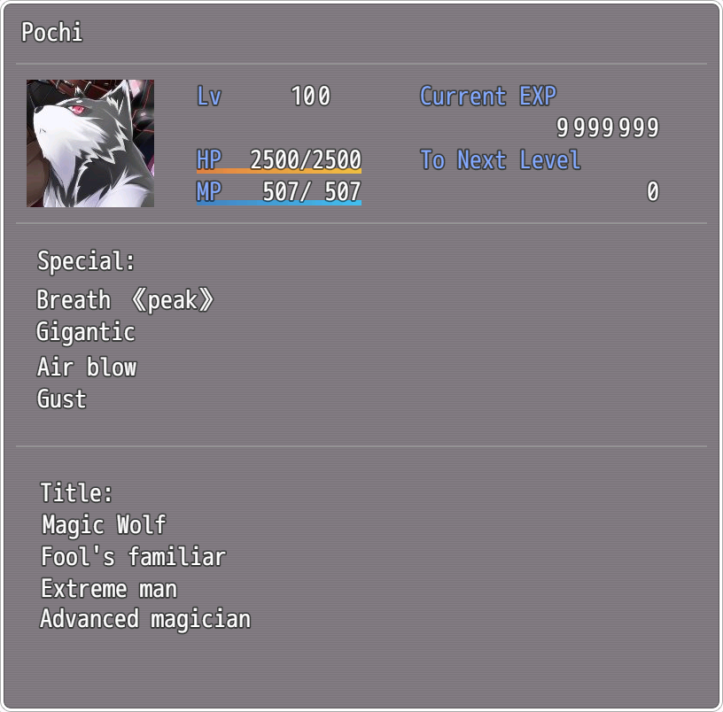 Fool’s Familiar ? Well, certainly I am stupid … So it’s fine, I guess ?
Wait, Why did I feel convinced …
Oh, it looks like it, this glasses can also read with the reflection, too … and. 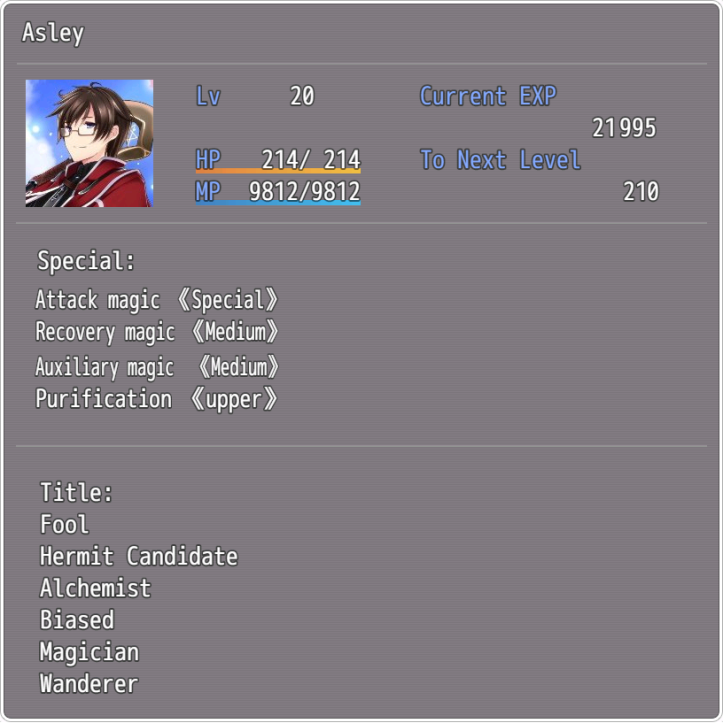 Since I crammed only knowledge, I wonder if this MP is attached.
There is a possibility that it rises steadily with the improvement of my level.
Although it would be better to take the title as much as possible, there is also a minus title …
Well, I can tell you. The “Fool” would have lowered all my stats. It seems I need to be patient to get rid of this.

I guess I have “Biased” because I have continued to do research entirely.
What I told you earlier, I mean “Hermit candidate”.
You don’t have to write such an entry form.
Well, I guess this is something I did.

“Okay, I decided! I will withdraw here tomorrow! Pochi, prepare the luggage!” (Asley)

“The sun is dazzling … I’m starting an adventure that will be called a legendary adventure after decades!” (Asley)

“Travel and adventure require a purpose, Pochi, do you have something in mind?” (Asley)

“Purpose … right, I had become a Magic Wolf with a lot of effort. And I heard that somewhere in the world, there’s a 《Familiar Cup》” (Pochi) 《使い魔杯》

I certainly have heard of it, but what do you know about it, Pochi?
There may have been such thing in my literature.
Is it information that I knew from there?

“Well, if you’re talking about an adventurer, it will be about dungeon! I’d like to capture the 《Demon King’ Bosom》 which is said to be the biggest labyrinth! There must be certain rare books and artifacts …” (Asley) 《魔王の懐》

“I will not say I will become a wise man, but at the very least I want to eliminate the 《Fool》 title.” (Asley)

Pochi is surprised as he open his mouth.
Stop it, don’t look at me with such eyes.

“Eh, is this a joke? If you get the 《Fool》 title, your ability will fall without a doubt! In my case it was 《Fool’s familiar》 title?” (Pochi)

“Don’t worry so much. So are there veteran adventurers in the world?” (Asley)

I don’t want sand. It will be hard to walk. I don’t want mountains for similar reasons.
Then it will be either ocean or grassland. At time like this …

“Pochi, which do you prefer, meat or fish?” (Asley)

“I’m a wolf even if it rots, I always prefer meat” (Pochi)

“Okay then, we will go to the grassland!” (Asley)

“Calm down, it seems to be a good opportunity to devise our exquisite combination. Operation name 《Pochi rest in peace》 Activated!” (Asley)

“Rejecting! Oh, I have a good idea, Operation name 《The benefit of Asley’s sacrifice》, let’s activate this!” (Pochi)

What a horrible thing he come up with!

Pochi recklessly plunges into Cyclops.
I begin to draw magic pattern in the sky with magical power on the cane.
After that, write a character of light like sunlight, float up in the air, and rain down to the magic pattern.
The characters that entered the pentagram star become magic formula and activate the magic that matches that formula.

The monsters were penetrated with spears reminiscent of a burning meteorite, and at the same time the penetrated part began to melt instantly.
And the sound of the bell rang in the brain, telling me I just level up. It sounds as echoed as ever …

“It hurts, that one hurts! Can’t you choose a more friendly magic!” (Pochi)

“I don’t know how to use magic for each case, it can’t be helped! You don’t have to raise your voice like that!” (Asley)

“I’m not scolding you, I’m just thinking for the master!” (Pochi)

Pochi gradually become stricter, apparently he seems thinking about me.
I remember my father and mother who I forgot the face.
After losing my parents at the age of ten, I was taken care of by my uncle and I left his house as soon as I became a fifteen year old adult.
I’m thankful for the uncle who nurtured me, but there was no remnants.

“But《Demon King’ Bosom》 and《Familiar Cup》 I wonder where they are?” (Asley)

“Well, how could I know?
In any case, other than the 《Demon King’ Bosom》
I think Pochi will have a best use for《Familiar Cup》 don’t you think. Because Pochi is the best level” (Asley)

“Don’t be stupid, you have to decide what you are going to be at a level 100.
Learn a lot about tactics and make your body remember it,
it is impossible to get strength with just level” (Pochi)

“Why are you know so much details about it?” (Asley)

“It was written in the book I found in the master’s library, I think it’s a pretty old book” (Pochi)

As expected. I wonder if that was the reason why there’re many books have the smell of Pochi.
This guy always turns pages after licking his meat cub.

“In that case, that dungeon was better after all …” (Asley)

“If you keep living in such place, you can’t call youself as a human” (Pochi)

“So, is it likely that you will find a mansion, Pochi?” (Asley)

In my words, Pochi is sniffing the surrounding smell with a annoyed look.
He is only become like this after becoming a magic wolf.
He wasn’t like this before.

“Sniff* …, there is a smell of water from over there” (Pochi)

“There must be human at where water is, even we can be sure, do you want to go there for the time” (Asley)

I am waiting for your comments and suggestions.