Arge Chapter 119: Nice to meet you

After done with this arc, we still don’t have enough raw chapters for a new Arc.

I will stop translate Arge for about 1 months or more (Author release this novel on weekly or slower). I don’t want to translate half way and grind my teeth with Cliff Hanger.

Next, I will at least release a few chapters of Mira, Manowa, Swordsaint, Asley. I can’t promise it daily like Arge or Mile because they are 3000 words+ (3 times longer) and harder to translate than Arge and Mile.

About half of August, I will start translating until chapter 129 of Mile’s Novel daily. To be done with Ancient Dragon Arc and reunion with Marcella trio arc.

By the way, I have a good new. Rising The Dead plan to re-translate Mile again from where they left. We can read a proper translate of Average Mile again.

After defeating the enemy, save the enemy (both the heart and the body).

Our enemy become a friend (in this case, fall in love with you)

Arge Chapter 119: Nice to meet you

It is easy for this body to avoid the fragments of golems falling apart.
With my Body ability which is『Super Agility』, my speed parameter is at maximum.
This 『Super Agility』 is not simply just my movement speed, but everything concerning speed, including dynamic vision, reflexes, and attack speed.

The Gigantic Golem is still crumbling, its fragments and Igu Jisuta caught by gravity are falling to the floor.
When I concentrated my mind, everything just looks like a slow-motion video.
I ran with full speed that even left behind an after-image

I can see her mouth trying to say Cyril, but she didn’t make a word.
Even if she sees me as Cyril or as Argento, I want to save her.

They called my name, Their voice tells me that I am me.
Even if I don’t know how I will live, right now I’m Argento Vampear.

For me, for Igu Jisuta, for Cyril that still exists inside of her. In order not to lose, I embraced her.
Because of my vampire body, I can run while supporting the load of another person.
I’m running while embracing Igu Jisuta and avoiding all falling rubble and golem fragments.

I avoided all falling rubbles and returned to Kuzuha-chan and Richelle-san.

Since the golems had stopped moving, there was no desist. Igu Jisuta turned her face looking at me in my arms. She doesn’t call me by Cyril’s name but is asking me because she still doesn’t know.

“Well, I don’t know whether Cyril is still alive or not, Cyril may be the reason why I was born, but I am Argento, not Cyril” (Arge)

I made a clear denial and let her go down to the ground.

Finally, we were able to meet.

“Did you understand?” (Arge)

She is stroking my hair. Her hand gesture is gentle and because she feels apologetic, she also tends to hold back. I felt comfortable with her stroking my hair and I began to speak.

“Do you recognize a place named 「Antares」?“ (Arge)

“… Cyril’s last letter was sent from there” (Igu)

「Antares」 is the name of the ruined city I was reincarnated in.
The place where I arrived soon after my reincarnation.
I heard from everyone that place was ruined a long time ago and it was due to a large battle.
I don’t know why it happened.
Still, undoubtedly Cyril is the reason why I was born in this way.

“I think that the magical power left by Cyril gave birth to me, but that’s all.” (Arge)

“Yeah, that’s why I’m not the one you have been looking for all this time” (Arge)

“You are you, not Cyril. Your name is Argento, a different person from her that is still alive.” (Igu)

We exchanged words to confirm each other’s recognition.
I still know she kept waiting, thinking and cherishing Cyril.
Waiting for centuries, there are many things to cry about.
Nevertheless, I wonder why she kept thinking about meeting Cyril someday.
She has been keeping this Big Safe; the place to return so that her loved one might come back.

I’m sure you will be saved.
You have been doing it for a long time already.
Still, her salvation isn’t me.
I cannot be her salvation and I should not be.
Igu Jisuta stopped speaking and hid her face behind her red hair.
I guess she doesn’t want me to see it.

It will take time.
So, I decided to wait.
She raised her face again after a while.
She bent over her back to align our eyes equally.

“There’s nothing to thank for, I’m sorry that I can’t be your salvation” (Arge)

“Because, if you do that, I will lose another important thing” (Igu)

“Certainly, If I do that, you will forget your memories about the real Cyril” (Arge)

That way of speaking, so she can finally see it.
It will be a story about updating memories.
If I accepted it, she was going to fill the memories she has built up with Cyril with memories of imitation.
If the words of thanks are with that intention, I wanted to accept them obediently.

I was hugged by Igu Jisuta with an overly excited expression.
My face was pressed against her chest, it’s soft so I don’t feel pain, but I can’t breathe.
Her breasts are as big as Felnote-san that covers my mouth and nose.

“Because both you and I were born out of Cyril’s magical power.
I am an artificial spirit that was born before you, a onee-san!
You are my Imouto! You are just so cute!” (Igu)

… Have you made such a conclusion?
As expected, I could not predict this person’s action;
I didn’t think that she would interpret it this way.

I was buried on the soft thing that is covering my whole face.
I struggled to push her back somehow.
However, there is a difference in height, and it will be dangerous if I push her with a vampire’s power.
Even so, this is unbearable.

If this is my cause of death after carefully reincarnating, I somewhat feel sorry for Loli-gramps who took charge of me … Uhm, I’m losing … consciousness …

Four small fox girls pulled me off from Igu Jisuta.

Delicious air after a long time. The fragrance of Igu Jisuta sweetly touches my sense of smell and goes through.

“What would you do if you killed Arge-san – desu~no! Think about the size of your chests before doing it – desu~no!” (Kuzuha)

Kuzuha-chan threatens Igu Jisuta with her ears, tail, and hair standing up.

Because four Kuzuha-chan’s also hugged me to cover myself from Igu Jisuta, Kuzuha’s chests are pressing to my face this time, but this one is modest.

“Kuzuha-chan, will you calm down a little?” (Arge)

She is a bit excited and her vocabulary is lost.
Also, it is a little hot when four girls keep hugging me.
With a light push, four Kuzuha-chan’s left.
Haa, it was painful.
For now, let me breathe the air and calm down.
The Battle is over and Igu Jisuta is convinced.
There is nothing to hurry.

“Let’s talk about various things, for the time being, it’s time to get to know each other” (Arge)

“The same for you, Argento” (Igu) (こちらこそ、アルジェント: Kochira koso, arujento) 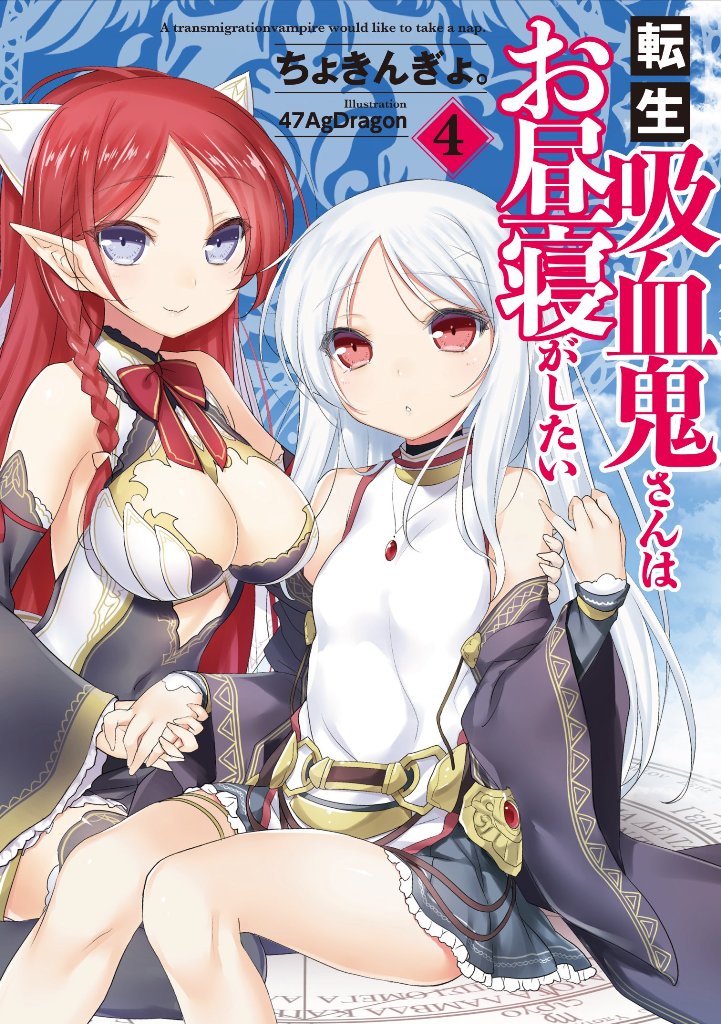 The feeling when our hand’s touch is gentle and soft.

Finally, she has time to talk in order to know each other. She decided I’m somewhat like her sister, she will take time and effort.

Unlike Kuon Ginji, the spirit of a lonely man who isn’t complete at all by himself.

However, I don’t dislike it.

At least I think so.