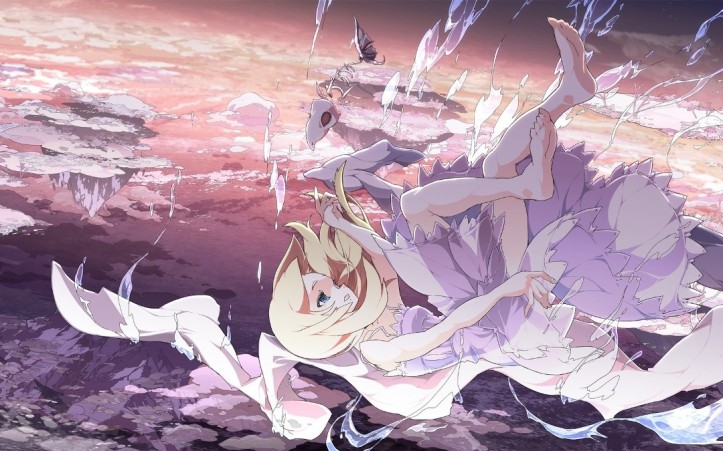 The expression of Fernand, the first Prince of Brancott Kingdom, was dark.
The day after the tragedy at that party, Fabio and Alan went to check the dining hall where Kaoru worked at but they couldn’t find her.
One of the waitresses said that 「Kaoru was called by a big noble and she said she shouldn’t come back anymore, thus she quit so that she wouldn’t cause trouble for the dining hall」

She’d been preparing this far? Had she been chased that far already …?

After that, Fabio and Alan searched the city.
There was a story of a bleeding girl who went outside the gate on the evening of that day.
The gatekeeper said that she went out of the gate without any baggage on her.

Did she arrive safely at other towns?
Did she get a proper job even with that terrible scar?
Every time he thinks about it, his heart gets heavy…

「Fernan, I heard something interesting」(Fabio)

Fabio excitedly tells Fernand as he arrives.
It’s quite an unusual sight for the always calm Fabio.

Fabio grinned to Fernand, who showed a little bit of interest.

「 Surprised. This is information I bought from a merchant from Gurua that just arrived in our city today “Goddess Celestine-sama’s friend” appeared in Gurua
(T.N: I forgot to explain it before, Gurua is the capital name, Balmoa is the country name)
She made a miracle and was saving people.
She even made both the king and the temple lose face」(Fabio)

Fernan was amazed.
A story such as this is unlikely to be a fairytale, that’s why Fabio thinks it’s interesting.

「And about this “goddess’s friend”…」(Fabio)

「Think of any errands that would allow us to go to the Balmoa Kingdom!
The government, courtesy, anything will do, and we have to go as soon as possible!」(Fernand)

「Yes, yes, I knew you would say something like that, so I already prepared the necessary arrangements…」(Fabio)

As expected of Fabio.

「Okay, I’ll bring her back, if it’s just like what you heard that she caused a dispute with both the royal palace and the temple in that country, it will be hard for her to stay, this is convenient for me!」(Fernand)

Even though he somewhat regrets what he did, but it seems that his superiority habit can’t be rid of that easily.

Kaoru was having a peaceful day.

After that 「Public interview」, I was worried a little whether idiotic people would come.
However, it seems that the threat worked.
Even if you capture or threaten me,  it’s meaningless because「The Goddess will decide everything.」
It’s impossible to hold me as a hostage to demand ransom from the goddess.

I also told them that if they dare to try and anger the Goddess, everyone from any faction and even the whole capital city as well will get punished.

「Do not lay a finger on Kaoru」was the order spread from the leaders.

After all, Kaoru is 「 the friend of the goddess」

There are advantages and disadvantages, the cost-effectiveness, the risk, and return.
Risks such as making myself the enemy of some royalties and nobles.
The temple side as well.
It was impossible to force a girl who wasn’t a believer to the temple.
They themselves don’t want to become heretics by hurting the goddesses’ friend.

Although the people weren’t satisfied, they wouldn’t even dare to think of opposing Kaoru
Well, how can someone claim to be 「an average girl」at the point of 「receiving the love of the goddess」

Those families with injured and sick people wouldn’t be calm, but when thinking about the anger of the goddess if they tried forcing Kaoru to do something, it’s nearly impossible to try and retaliate.
Still, people knew that Kaoru was working at the workshop and they were all like,「I want to see her face」and「Please let me see her」…

But unfortunately, Kaoru isn’t working the business part of the shop, she’s only cooking, cleaning, and doing chores at the back.
People couldn’t even meet her if they went to the workshop.
Even when Kaoru went out.
There weren’t that many people who could notice her in the first place.

Although this world has fewer black-haired people.
Due to the high population of the capital city, there were still some people with black hair in it.
Although a lot of people gathered at the Central Park at that time.
It was mostly Royalty and Temple people who were close enough to see Kaoru, only an extreme minority of commoners managed to get a close look at Kaoru’s face enough to distinguish her.

And this is a world with no photographs and mass communication that would be able to let everyone know what Kaoru actually looked like.
Therefore, information about Kaoru was only transmitted at most was 「a cute girl with black hair」

Both the Royalty and the Temple didn’t spread any information so people wouldn’t even know the color of Kaoru’s eyes.
For that reason, Kaoru casually went out to the town today.
Apart from buying food from the market, Kaoru also has work to be done at the libraries and the run-down house.

As Kaoru was walking while eating skewers bought at a stall a while ago.
She saw a beautiful lady walking in front of her.
Actually, that beautiful lady is still at the age enough to be called as a girl.

But from Kaoru’s viewpoint, most Westerners over the age of 15 look like adults.
Well…, in this world where the adult age is 15 years old, Kaoru’s wasn’t really wrong…

She moved elegantly even with the sword on her waist.
Judging from the clothes, is she a knight or an apprentice knight …?

When Kaoru got close enough, that woman no…girl suddenly stopped and stared at Kaoru’s face. She shrieked with a surprised voice.

Is this a longevity manga?

Kaoru was suddenly shouted at by the unknown girl, and she was confused.

「I… I’m the knight, Francette!」(Francette)

There was a reason that Kaoru didn’t remember Francette.
Back at that time, Francette didn’t tell Kaoru her name …
Well, even if Kaoru got her name, Kaoru would probably still forget about her.

I would be in trouble if this girl continues calling me “goddess”
Kaoru thought so as she pulled the girl to a nearby restaurant.

There was still an hour before lunch so it was mostly empty.
Kaoru sat on the seat in the corner and asked the girl again after ordering food properly.

Francette desperately explained.
Then they met in that forest with the Earl’s children.
The siblings’ grandmother got healed.
She used the other two in the royal palace and so on…
Kaoru was shocked.

「 The speed that the Royal Palace reacted was too fast.. , is it because of that …?」(Kaoru)

「No way. is this for real … as expected, the mysterious skills of the superhigh-life-organism rivaling God …」(Kaoru)

(How did she recognize me?
Didn’t I look different from before?
No, actually only the color of my hair is different, but my face is still the same …
However, it’s still impossible for her to easily recognize me …
Is it because she worships me too much and remembered my face?) (Kaoru)

「Knight Francette, I have something I would like to ask of you」(Kaoru)

「My pleasure, please order whatever you want!」(Francette)

「… So now, I am supposed to be a 「friend of Celestine」
Well, that itself is true… but I was mistaken as an ordinary girl.
That’s also not a lie, because right now I am living as a human.
I’m just an ordinary girl who has a little bit of a healing power」(Kaoru)

At that time, Francette returned with Earl Adan to his territory, to organize his affairs. And she just returned to the Capital the other day.

Therefore, she didn’t know the details of the matter at the central square.

「Yes, The Goddess’ secret is safe with me…」(Francette)

Francette straight her spine and swears with a serious look.

「Ah, yes, there’s also that, but what I would like to ask for is something else …」(Kaoru)

Kaoru explains.
Although somehow Kaoru already had a quiet life, however, it’s difficult to give people blessings in the present state.
What Kaoru wants is a friend on the side of power.
That friend can be trusted and has the power to protect herself and Kaoru.

So Kaoru asked Francette if she can secretly contact the Earl who to employ Francette.
In return, the Earl and his relatives will have benefit from goddess blessing.

「Well, but I already resigned working for Earl Adan, I was moved to the Kingdom by the Earl himself …」(Fracette)

Just when she came up with a plan, things had already become like this, Kaoru was stunned.

「… and, from the day after tomorrow, I will serve the royal palace as an escort for Roland-sama, the King’ brother」(Francette)

Okay, change of plan. Let’s go with plan B

「Brother, then how do we calmly approach this matter …」(Serge)

「Let’s leave it to the people of the Lyotal family for the time being, after that, let me spread the circle little by little from there…
Ah, in order to make it easier for other nobles, should I move Viscount Lyotal’s son to the countryside and give him some job title?」(Serge) (T.N: countryside often have no-GREAT noble)

「But then, the one who would get closer to Kaoru won’t be a “Noble aristocrat” anymore…」(Roland)

「Archbishop, then, again with a relaxing measure …」(Perrier) (ED/PF: whut?)

「Yes, deepen our contact little by little, so that we can invite her to our temple.
What is the name of the mother country that she abandoned?
How can it be that there’s no Celestine-sama sect in that country but she can become Celestine-sama’s friend…?」(Sornie)

「Holy Maiden Shera, please do it.
You are the one who had a conversation with just a couple of people since the last time goddess Celestine gave her Oracle to everyone.
Surely you can earn the trust from her friend
Please choose some suitable people and do it」(Sornie)

「Yes, please leave it to me」(Shera)

And then the Archbishop suddenly asked Shera.

「By the way, Holy Maiden Shera …
It has been more than 50 years since then.
I wonder if you could tell me what you said to the goddess at that time.
I’ve become more and more anxious about it after 53 years.
I would like to know what it was before dying …」(Sornie)

But the Holy Maiden Shera shook her head as she smiled.

「Oh, well, I knew that you would answer like that …」(Sornie)

Archbishop Sornie also smiled, but he seemed a bit disappointed.

(I cannot tell them about it!
The Goddess consulted me about「How can I draw the attention of a guy?」
That’s all the Goddess thought about for the whole time!) (Shera)

It was certain that Holy maiden Shera will bring this secret to the grave.