Arge Chaper 125: To the bottom of the Ocean

Arge Chaper 125: To the bottom of the Ocean

As the ship was completely sunk into the ocean, the first thing I saw was a group of fish.

The group of fish that looked like goblins, passed through while avoiding the bubbles wrapped around the Pisces.

Looking up at the top, I could see the light from the surface slowly faded away.

“Yes, we can breathe. For now, we should confirm her intention first” (Arge)

The other two’s condition must have become better after I cast the healing wind magic, that’s why Kuzuha-chan who has taken care of them can afford to come out of the cabin.

“Yes, I can tell by looking … but is everything okay?” (Kuzuha)

“This is the work of a girl calling herself an Ocean Demon, … for some reason she wanted us to come visit” (Arge)

“…Ocean demon? Their ancestors were creatures living in the ocean like octopuses, squids, etc.

One of their race are mermaids. They are also beastkin like us but they are a diverse tribe that live under the ocean” (Kuzuha)

While Kuzuha-chan explains, the Pisces is dragged towards the ocean floor.

I don’t know how she is doing this, but for now, it’s more important to grasp the situation.

Looking back at the scenery from the edge of the ship again, the view that spreads is a blue landscape.

The landscape itself in the sea looks calm and clear, but the ocean current is intense. (T.N: Uhm… I think just like in a Aquarium, from behind the glass, the ocean seem calm because we can’t feel the water but the water current is strong and intense)

Pisces isn’t affected since it was wrapped in foam, but from the environment, I can understand how strong the water pressure and current. At least I don’t think I would like to go outside of the foam.

“… we also have to explain to Zeno-kun and others as well, even though there are many things that we don’t understand either” (Felnote)

“Well, because only I can speak with Richelle-san, I’ll explain to her later, their seasickness should be cured with my magic just a while ago—“ (Arge)

Such good timing, I can explain the situation easily, and I can also communicate with Neguseo through blood contract’s telepathy.

Richelle-san understood the circumstances just by looking, and she spoke.

“Ocean Demon … I heard that they are living under the ocean around the Demon Continent. And there was a Sea Queen that oversees the ocean” (Richelle)

“Queen of the Ocean Demon?” (Arge)

“Yes. But she must have a reason to catch us alive rather than sinking the ship without question.
… This place is certainly close to the demon continent, at least that’s a good news” (Richelle)

Richelle-san says so as she smiles.

It is a smile like usual, but even as insensitive as I am, I still find it awkward to smile at time like this.

However, the purpose of this journey is taking her back to her hometown. It can’t be helped that she’s somewhat happy that she coming closer to her homeland.

But then maybe she just grasps the situation somehow. Richelle-san shakes her golden hair and lowers hers head. She must feel regret.

“Maybe the Queen just wants to have an important talk with Arge-sama. So you don’t really need to worry. For now we should try talking with the Queen first” (Richelle)

“… Well … I don’t know what her purpose is, but let’s get it done and return quickly” (Arge)

As Felnote-san says those words, everyone gazes at the bottom of the sea.

The landscape we saw at the bottom of the ocean.

A flock of regularly arranged roofs on an organized stone road.

Algae are clearly and intentionally planted at the ends of the roads, and the landscape is directed by flickering in a swaying manner.

Many of the people going and leaving have scales throughout the body and lower body like squid. Perhaps they are ocean demons.

Unlike the ground, in the ocean, people are both walking along the road and swimming in the water. What comes to our eyes is indeed a town, and it is clearly well maintained and established.

Zeno-kun stays next to me, opens his mouth wide, and with eyes like he is seeing unbelievable things.

“I heard that there is a queen of the ocean demon that really good with magic, but to think she can make a town like this…” (Kuzuha)

“Anyway, the end has come into view” (Felnote)

The fact that we can see the cityscape means that this is the bottom of the ocean.

As evidence, the Pisces has begun to slow down the descent speed.

“How is that, customers, what do you think about this city of mine?” (Queen)

Unexpectedly, we were called from behind.

We were entranced looking at the state of the town, I didn’t notice her approaching and it seems that everyone was the same, all of us turn around in a panic.

From what she said, it was as if she was there from the beginning.

A girl with blue skin stood before the steering wheel.

This girl’s face looks a little older than mine. Even though she has blue skin, she has two legs and looks almost the same as a human being. She also has purple wavy hair and golden eyes. 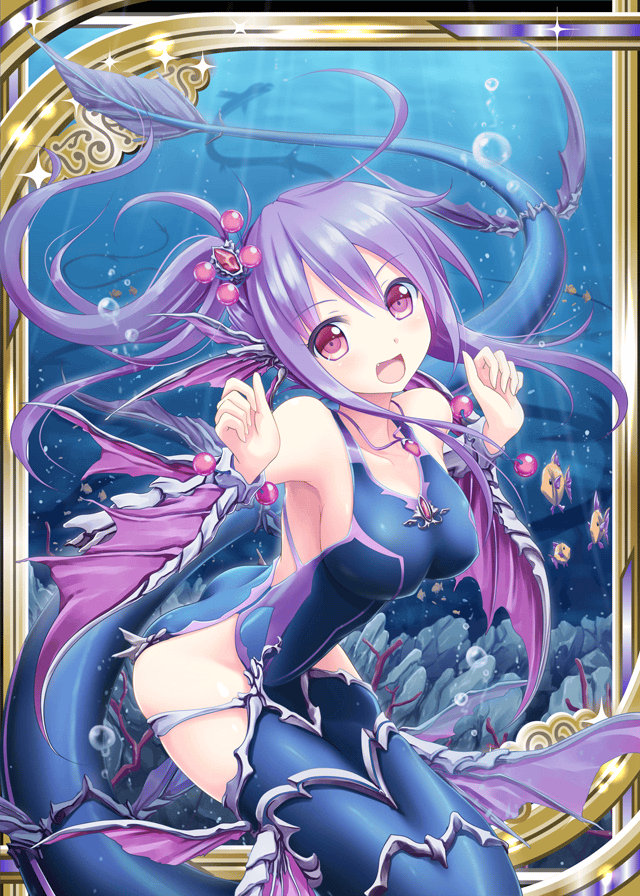 The girl swam around and touched the ship. Her legs wave like fish fin, and she swam at the edge. As she laughed, she exposed a sharp pointed fang like a shark and nodded many times.

“Ho ho ho, this is interesting, this is the first time I see a ship in an unbroken state” (Queen)

“You were … Uhm, the one talking to us earlier” (Arge)

A familiar voice that seems to have fun. It definitely belonged to the Queen of the Ocean Demon race who invited us to the bottom of the sea.

However this girl is too small to be named the Queen, she only has modest breasts suited to her body.

“Yeah, I’m Kutira! The Queen who oversees this undersea city! Welcome customers, you can relax—” (Kutira)

As she is busy talking, while swimming, the back of her head hits the steering wheel.

Maybe because she is in the bubble right now, The blowing sound heavily.

“She bumped her head…” (Felnote)

“She really bumped her head …” (Kuzuha)

It was pretty heavy sound, and she remained in the bumped state, so I couldn’t tell if she was ok.

A faint, breath-taking word leaked out. There were some tear floating on her golden eyes, she turned the palm of her hand to us.

As I say so, the girl nods.

She steps one step forward and checks the distance with the steering wheel behind her several times. Also she checks her appearance, arranges her hair with her hand, and wipes off the tears in her eyes.

She cleared her throat, and she talked again.

You have done well, coming to our ocean floor city, customers

I’m the Queen of the Ocean Demon, Kutira. Allow me to welcome you!” (Kutira)

Even I don’t understand well but it was too late to fix her entrance now.