Translator’s Note: This Chapter is really hard to know which is Meliza’s POV and Narrator.

So please excuse me if the 1st and 3rd POV are mixed with each other.

Although Meliza (got some damage and) wandered back to 『Maiden’s prayer』but she was not just a little girl.
As the innkeeper, she decided to protect her sisters on the day her father died, instead of worrying about her own life as a good sister. She wouldn’t break down with damage only to this extent.
She thought of a countermeasure immediately.

The evening before, Meliza is trying to get more guests for the inn, Rafia managed to stop her but

「This is nothing, I will regain the customers with this!」(Meliza)

There’s a reason Meliza said so, considering from the common sense of ordinary adult women of this world, as the skirt expose above the knee was『shameful, inappropriate length』

More than that, she wear dress where people can see the valley of the chest, it was an insane dress for common adult woman.

However, it’s not uncommon for child under 15 years old, a female hunter who emphasizes on practical moving (Thief/scout  class), a dancer, a woman employee of a hot Spring etc.
But it’s not for a common adult women.
But for her sisters and the inn’s sake, Meliza wouldn’t hesitate even to sacrifice her own dignity.
At the front door, she hesitated for a moment, as expected, but it was only 1-2 seconds.
She opened the door vigorously, took a step towards the outside, and then she spotted Pauline and was taken aback.

「… This is the last! I will never wear this kind of clothes again!」(Meliza)

What she saw was the figure of that big tits woman shouting with a bright red face.

Her belly button was exposed because the shirt was pushed up by her chest.
Foot, from the knee down and the majority of the thighs were exposed.
The round butt that people can clearly see the shape.
It was Pauline was wearing the familiar Mile’s exercise cloth.

…can not win.
As expected, she didn’t have a decent nerve, she couldn’t show up in such a shameful appearance.
(orz) Meliza with both hands on the ground, caught in a sense of defeat, she was blowed away by the big tits of a big tits woman.

Apparently what she was thinking was leaking out of her mouth. And in a loud voice.

Meliza, who returned to the 『maiden’s prayer』and was holding her head.
Of course, she couldn’t compete against someone like that even if she used all her wisdom and abandoned the dignity as a woman. And of course, she couldn’t make her sisters imitate that girl.
She worked hard for her sister’s happiness, that’s why it was out of the question.

There were only a few customers left, including elderly couple who always care about Aryl. Since Rafia alone is enough, Meliza can just sit in the accounting counter seat and thinks.

(Meliza’s POV, maybe, from raw, it doesn’t make much sense in 3rd POV)

[ When I looked at the current management policy, I had trouble. I wonder what I can use to protect the inn that my parents, my grandparents and their ancestors have protected until now.
However, most of the saving money was used when my father died, and what left was lost from employee that ran away. We could only work because we received the loan with Zero interest from the commercial guild. We had no choice but to use a underhanded method to compete with『Wild Bear Pavilion』in the state with debt, amateur dish and manpower shortage.

Now that I think about it now, I don’t know if it was a good way. However, it was 『needed』to last, and at that day, I thought that was the best option in that situation.
In fact, we had done well until now. We were able to return the debt, and even though it was just a little, we could save some money for an emergency.
So, even if I reflected on it, I didn’t regret that I did it.
But right now, I need to think of a good way to run the inn.

… Returning the price to the old price?
Certainly, I didn’t think that we could keep the present condition forever.
Regular young men will get married sooner or later. My sisters are also growing up, and at a certain point, we can’t get away with sympathy and unreasonable charges anymore.
However, even with the same price, can we compete with 『Wild Bear Pavilion』 with amateur cuisine?
That disgusting cow, that handsome beauty older sister, and just a little cute girl. Can I compete with the girls as the same age as Rafia?
That is too reckless, an impossible mission …
Those kids seemed to be hunters as well, they were talking well with other hunter guests.

…can not win.
In all aspects, there’s no chance to win.
But if I don’t manage it somehow, if I just keep watching the situation as it is, our inn will collapse. I already paid off my debts that’s why I can’t make more loans.
Also, I knew that the commercial guilds weren’t happy with the way we were doing until now. With this, it will not be possible to receive loans with favorable conditions like zero or low interest rates like last time. That was a special service with sympathy. ] (Meliza’s POV)

And after the meal customers, the only elder couple returned home and locked the door, Meliza spent a cramped and sleepless night in the bed.

After the lunch time and the last guest returned.
Cleaning of the guest room and making bed were already done in the morning, so the sisters had time for a while from now to before the preparation for dinner.
And it was natural that 『Maiden’s Prayer』had free time right now, the same goes for『Wild Bear Pavilion』
Meliza thought overnight, and last night, no, actually it is until around the today morning, she decided to do what she had to do, and moved it to action.

Originally, regarding meals, everything except shopping was left to Rafia. Even though Meliza was there, she wasn’t very useful. Even with shopping, Rafia often did it by herself.
So, for Raffia, Meliza went out of the inn wouldn’t be much problem.

And she went to 『Wild Bear Pavilion』
Of course, there was no need to knock, Meliza entered the store as soon as she opened the door.

Everyone was surprised, the owner, his wife and 『Red oath』were having a meeting at a cafeteria with no customers.
Meliza glanced at everyone and shouted out loud.

And, it was a splendidly performed, jumping dogeza. 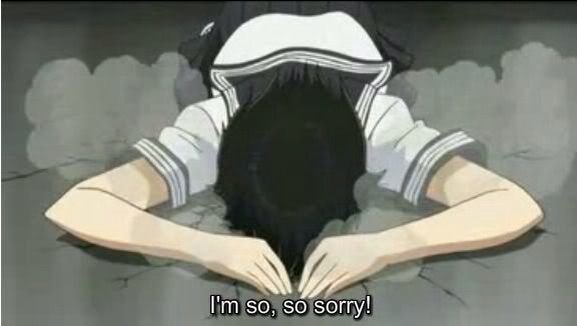 And Mile was impressed with something average in this world. Just as usual.

Amongst the surprised people, the owner and Pauline were surpised the most.

「Stop it! Even if you want us to hear you out, you don’t need to use such underhanded methods!」(Kuma-san)

Meliza raised groan when listening to it.
The Owner didn’t not realize that his words are equal to impeaching the working way of 『Maiden’s prayer』as a 『underhanded method』. But Meliza was clearly aware of it.

And Pauline shouted after the owner.

「Even though we are already preparing the 2nd and 3rd plan to break you down, I’m in trouble if you give up so quickly!」(Pauline)

(I’m glad that I decided to give up quickly, that was so close!!) (Meliza)

Meliza had a blue face. Although it wasn’t so hot, but she was sweating a lot.