Translator’s Note: My bad, I thought everyone knew about 4th wall already.

“The fourth wall” is an expression stemming from the world of theater. In most modern theater design, a room will consist of three physical walls, as well as a an imaginary fourth that serves to separate the world of the characters from that of the audience.

In fiction, “breaking the fourth wall” often means having a character become aware of their fictional nature. This can range from your character advising you to “PressX” in a tutorial all the way to Psycho Mantis reading your memory card and mentioning the other games you’ve been playing. However, the most direct violation of the fourth wall would be a character openly acknowledging they are in a video game or even directly speaking to you, the player, instead of to your character.

「Ah, that, well… it means like 『A daughter that fonds of her father』. Yes, that’s it」(Mile)

Somehow, the meaning seemed to be transmitted.

「Well, well, I just wanted to know if the young lady is doing alright.
So next time, when I contacts our village, I can tell her parents.
Thank you very much, young ladies.
Even though young lady Kulereia still wrote letter to her parents regularly.
But… well, if she was in trouble or got sick, she would still write in her letter with 『I am doing fine』because she didn’t want to make her parents worry.
So, if her parents could hear the story from a third party, I thought that her parents would be relieved …」(Elf)

The Elf uncle, Elsatok persuaded the 『Red Oath』with the explanation.
The girls could understand what he was saying, he just wanted to know if the doctor was still healthy, he didn’t need the contact’s info, so it wouldn’t have any problem.

So, the girls were thinking for a while, they were avoiding the matter of the ruins in order to avoid backtracking. Just telling how the doctor was doing and talking during that time, change the doctor’s failure story to 『Pretend to be a child to (get info from enemy) get sweets at the festival』…

After done with everything, Mile added her letter and the letter received from Elsatok to her original package which were 1 large and 1 small envelopes, and rewrapped all of it.
And then Mile handed the package to the receptionist, paid the request fee. Elsatok paid half the amount and thanked the girls many times. Then everyone left the Hunter Guild.

With this, the package would be carried on the next guild carriage, relayed several times and arrived at the Guild – Capital branch of the Tyrus Kingdom. And then the guild would deliver it to the destination written in the package. Afterwards, the person who received it would deal with it.
Whether the person who received first would do as the instruction properly is a matter of trust relationship, but Mile thought there was no need to worry at all.
The guild would never leak out where the package was shipped from. The fee was prepaid and on the receiver could read the name of the sender by opening the package. So there was no problem. Whether Mile wanted to tell the receiver the name and address was her choice.

With this, Mile group’s current place wouldn’t be revealed.
With confidential matter, the guild is trustworthy. And in her letters, Mile didn’t write anything but the necessary information.

「Well, let’s head for the capital …『Wait a minute』(Mile)…」 (Rena)

「… By the way, how old do you think doctor Kulereia is?
Because Elsatok said 『Elf children will not depend too much on their parents when they are around 40-50 years old?』.」(Mile)

Elsatok said 『at the time of the next clan contact, he would tell doctor Kulereia’s parents about the story that she was doing fine』

The doctor’s parents received the letter from Elsatok were extremely delighted and wrote about it in the reply letter to their daughter.

She was embarrassing about her failure was known by her beloved father. And she didn’t want to recall that event even it was already changed 『Pretending as a child to get (info)sweets fraud failure case」

Doctor Kulereia didn’t realize she clenched the letter from her beloved father and felt in bed.

「Grrr! Made me feel disgraced in front of my father…
Unforgivable! … Or rather, the ones who inadvertently told this story, those 4 girls.
I found you! I finally found you!!」(Kulereia)

Doctor Kulereia facepalmed and rolled on the bed as she said those words. And when she noticed that she was squeezing the precious letter from her father in a crumpled manner, she carefully expanded the wrinkle and put it into the drawing of the desk carefully .

「How long does an elf live? I had read a lot of books but it’s not clearly written in any book.」(Mile)

Even if Mile asked so, as commoner, Rena and Pauline weren’t even reading as much books as Mile so they couldn’t answer.

However, as a daughter of higher rank noble than Mile, surrounded by her father and brothers who talked about various things in order to gain the lovely sister’s affection. Maevis had some knowledge about the mysterious of the elves.

「Oh, I can’t say for sure because there’s no clear documents or records.
However, most elves had a very long life span. They mostly died because of accidents, diseases, fighting with monters, not with old age. Also, those who died due to their old age seem to have big differences in their age as well.
It was said that their life-span depend on the magnitude of magical power, such as when they were born the goddess decided it with a dice, and there were various other theories …
The elves grow at about the same speed as humans until they become 15-16 years old from birth, but after that they grow very slow.
They would spend most of life with appearance from 15 to 35 years old. After that, the speed of aging slightly increases again.
And at a certain age, they would have their final form (would become an elder appearance) until dead. (T.N: sorry, I can’t help use final form in a Saiyan refer)
And, as for Gramp Elsatok just before, he should have a considerable age. From his point of view about Doctor Kulereia, I think that his age wasn’t  just the grandfather or the great-grandfather’s level, but the ancestor’s…」(Maevis)

Mile gave her voice of admiration to the explanation of Maevis.
And, because 『their young era is long』, she remembered a certain race.

Then, after hunting and collecting, etc. and a few times camping, the girls finally arrived at the capital of Vanorak (Vu~anorāku) Kingdom, Chaleiraz (Shareirāzu).
This country is the neighbor of Mile’s home country, Brandel kingdom and is on opposite side of Tyrus Kingdom, Maevis and Pauline’s home country and also the country where Mile became hunter.
And of course in this country, people didn’t pay much attention to the news about C rank hunters party of a distant country.
So, at this place the girls weren’t special hunters but a totally average newcomer hunter party. And that was what the girl were expected when working for a while in this kingdom.
In Tyrus kingdom, due to that graduation test, their name was a bit too famous. In order to do it steadily, their reputation would only get in the way.

「Well, first we are looking for an inn, we will stay for a while, so we better find a good place.
Once we decide the inn, we will show our face to the guild to say our greeting about staying here for a while and collect information.
After that, we will celebrate the beginning of chapter 3 of the legend of 『Red oath』, we will order a lots of for dinner!」(Rena)

「Our encounter at the hunter training school is chapter 1, our activity at Tyrus kingdom is the chapter 2.
And we save the crisis of the kingdom is around the 10th chapter and we will be S rank by that time.」(Rena)

Standing in front of a certain inn, 『Red oath』said their line.
Yes, this is the inn of their choice in this city.

At first, the girls thought about check the inn with the guild, however『It is forbidden for the guild to recommend a particular inn, because it will become a favor or a business disturbance』was said, and the guild refused to introduce.

Well, it was just as they was told.
However the guild still told about the inns in 2 parts of the capital: 1 for rich people and 1 for ordinary people, to prevent unfortunate incidents, but there are many inns for people to choose it themselves.

Well, like the problem with guild officials introduce 『Maiden’s prayer』and 『Wild Bear Pavilion』…
No, no, they only told the girls because they asked, they only told what they think are better, they didn’t say it to cause trouble for the young girls.

With that in mind, the girls stopped thinking deeply.

In any case, the 4 girls looking at some inns from the outside, carefully examined the appearance, cleaning and maintenance, price list attached to the outside, the customer’s in and out, etc., determined as a result.
Besides, the girls would not sign an one month contract, if the girls found this inn un-bear-able, they could just move out and change inn.

[ As the four people entered the inn, while playing the doorbell, a girl ‘s cheerful voice came from the reception desk.
… The girls’ reception counters are always girls?
That was natural.
Because of this world, children’s mortality rate is high, everyone makes a lot of children.

No, children aren’t the only one with a high mortality rate, but children are still less resistant to disease, or in the event of an accident.
And, if there were boys and girls, and 4 type of jobs: heavy work, dirty work, dangerous work, and work to face customers, which work should you assign the girls to?
… I have no idea. ]

The inn that girl don’t work as reception is only the inn that doesn’t have daughter.
And if owner wanted to hire a person, of course they preferably hire a young girl before adults or boys. Because the wages would be cheaper and the second part is … Needless to say.

And the receptionist of this inn also the same, it was a job of a loli.

Yes, the receptionist girl of this inn was a little girl from 5-6 years old.
And, on her head, there were two ears.
No, every human beings also have two ears.
However, the ears of this loli was not on the side of the face but on the head. And it’s not average human ears.
Yes, it was called as 『Kemonomimi』 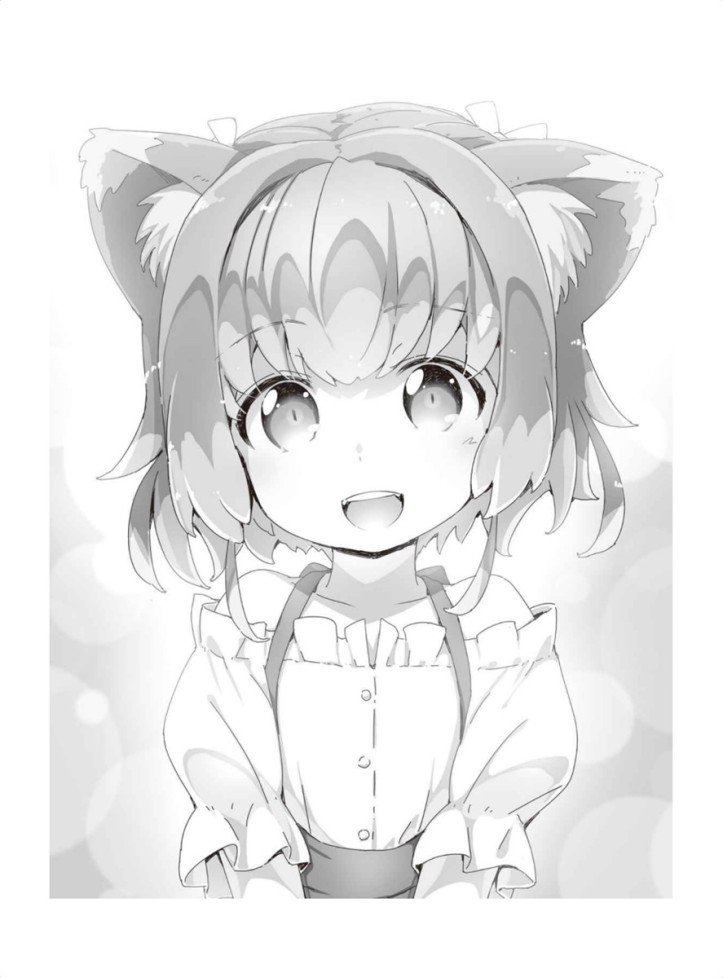 [ Only one girls didn’t surpised and said some strange thing.
I will not say who she is … ] (FUNA’s sensei 4th wall breaker)