After hearing the explanation by the the escort team, the Devils from the survey team had shocked faces.

The Devil Escort Leader was just lowering his head to the survey team members.
Apparently, his name seems to be Zawin.

From the story that Mile’s group heard so far, this devil searching group divided into an escort team and a research team. And the escort team leader is the one in charge of fighting and withdraw, he has the decision right and everyone is supposed to follow his judgement.

In other words, because the escort leader Zawin surrendered, everyone including the survey team, must be obliged to follow that decision.

「But what are you thinking? Will we be captured and interrogated by humans?
We proud devils can’t accept such a thing!
Yes that’s right. Even if you already lost and became a prisoners of war, but right now we have more people now, shouldn’t we win if we fight back now?
There is nothing wrong with recapture prisoners of war」(1 of 3 devils)

The other devils of the survey team nodded with their leader Helst (ヘルスト: Herusuto) and the 5 devils of escort team shook their head.

「But you guys must be careless to lose against them because they are just human girls. If we deal with them properly…」(Helst)

Zawin cut Helst’s words halfway and raised his voice with a shaky face.

「Didn’t you hear that what we talked about it a little while ago? I said we lost to them.
We fought in order and lost one after another, do you still want to fight them?
And beside we lost 4 times but she knocked down one of us with a preemptive strike, it was 5 times.
Do you make fun of us?」(Zawin)

「This is a judgment as an escort group leader and it is an order.
We can’t win against them.
If it comes to a serious battle, it will be a total annihilation or we will be beaten half-death and taken to the city of human.
Then do you know what will happen?」(Zawin)

Looking at the silent survey team members, Zawin turned his face to Mile.

「I’m sorry, could you show them something?」(Zawin)

Mile understood what Zawin wanted to say, silently pointed to the rock wall.

As magicians, they knew, even if they can chant it in head and speak only the name.

However this magic triggered too soon, or rather it was firing at full speed with absolutely no chanting.

8 holes in total with unknown depth in the rock wall.
8 holes. It’s the same number as the number of devils here.
This firing speed, speed of magic flight, and power.
It can not be prevented.

Helst apologized to Zawin and lowered his head.

「I know your skill but I doubted your judgment…」(Helst)

If it was Zawin, as long as he sincere apologize, Zawin will forgive him properly. Helst thought so, but Zawin had no reply. Helst raised his head wondered whether Zawin was very angry.

Zawin pointed at a human girl and trembled like crazy.

「You…, were you toying with me before?」(Zawin)

「Well then, so now that you understand the situations, you don’t feel like capture us anymore?」(Zawin)

And now everyone was able to start talking with each other at last.

「Yes, because I heard mostly of it from the running errands ancient dragons…, uhm, Beldetes and etc.
So, the human side already knew about this, and by now the guild might already inform the information to other countries, or so I think.
So, if you can promise that you are acting only within that range and that you don’t intend to harm humans. We will report so and it’s over.
No, I don’t know how our lords and king will judge and deal with this situation, but at least, our request undertaking the investigation is over so we will leave as it is.
Perhaps, the country and the lords will act, but I think you will be fine…」(Mile)

Zawin said so, because for them, Beldetes is a superior kind of ancient dragon.
However,『The role that Beldetes was doing was really going around the ruins and checking…』, after talking for a while he was convinced by Mile.

Then, because they confirmed that Mile’s group really knew the situation to a certain extent. Zawin said to other devils『It isn’t a problem even if we talk』but of course
they only talked in the category of 『what Mile already know』
That was enough for Miles.

However, depending on the progress of the survey, the devils still didn’t know for sure how long they would stay here.

And then Mile talked of the status of the investigation.
As everyone walking for a moment, the place was a little wider.

And on the rock wall at the end, there was something… 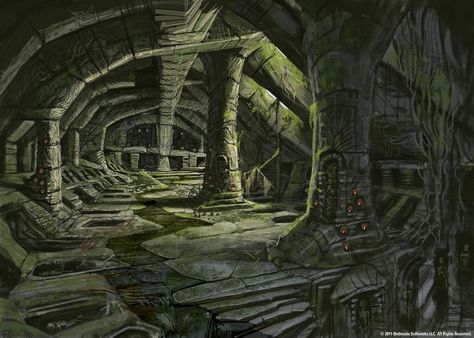 Mile couldn’t stand any more and asked the survey team leader Helst.
From the moment when Zawin talked with the 3 members of the survey team, from that point on, that place has been in Mile’s field of vision for a long time.

「Ah, it’s a small room that seems to be a treasure room.
It’s a dead end, it’s made of metal and small, so it may be better to call it a safe.
Although we finally opened it with a lot of hardship, there was nothing inside.
Well, if it’s really a treasure room, it’s natural that people took it away when they abandon this place」(Helst)

It was the same as the ruins from last time.
For the Devils and Rena’s group, it looked like a treasure room or a safe.
But for Mile, it looked like this:
An Elevator with door forced to open and broke…

Did people of prehistoric civilization that had advanced technology way far beyond the earth use something that makes it possible for Mile to know it’s an elevator at a glance?
They should have used a more unimaginable way of traveling.
Mile thought so for a moment, but she immediately thought about it again.

The prehistoric civilization wasn’t destroyed overnight.
If it gradually declined, most of the technical force and equipment was lost in the last term.

And no matter how much science advanced, they would still use old technology. Necessity, safety, endurance, maintenance expenses, and for various other reasons.

No matter how much science advanced, people wouldn’t use the transmitter to go to the next room or a few step.

Also on the Earth, even there are elevators and escalators at department stores, but they always make stairs as well.
There are also emergency staircases and evacuation equipment for emergency evacuation.
Perhaps this elevator might be use as an emergency escape.

Also, although it looks like the elevator of the earth, it’s actually a transfer device.
It may have a gravity control or a magnetic levitation type rather than a cable, and the power source may be these pair of busted engines.

If there’s something Mile can say about this.
It didn’t seem to work even someone entered it.
Even if it’s still working, Mile still didn’t want to get on it. In the present situation that the door was already destroyed, the safety mechanism must not work anymore.

And Mile secretly invoked exploration magic.
Yes, if this is equivalent to an elevator, there should be something equivalent to the stairs around here.

「Well, we are camping near here tonight and will leave tomorrow morning.
I will report that it’s just a devil survey group, there’s no problem.
But keep in mind that there is a possibility that a messenger for investigation and negotiation will come.
After a while, the news from the previous ruins will be transmitted,
I think that the correspondence of the human side will be unified as well …」(Mile)

Mile talked on behalf of 『Red Oath』, and the demons nodded.
And when Mile’s group tried to leave.

「Please tell me only one thing, how many are the human that as strong as you?」(Zawin)

「We are C rank hunters」(Mile)

Stunned, staggering, amazed.
After the Mile’s group went away, there were 8 stone statues that opened their mouths wide.