Disclamer: I’m not owe the images nor the novel chapters.

Everything belongs to their respect owner.

Finally, I made a lake and a moat.
The southern gate also functions as a gate, and the gatekeeper got better position, just looking down from the hut at the top of the gate.

I wanted to make warning bells, but metals are precious, so I made wooden whistles.
It is handmade by elder temperament craftsmen who are fine with detail work.

As usual, I have no choice buy to leave North Ward alone, with the current population, the functions of only South Ward will be enough.
As the growth promotion of the field increased appropriately,
quick growth magic sprinkled moderately,
the fruit trees finally got their heads out of the soil.
Thanks to the efforts of everyone, problem about drinking water and food are almost gone.

Reed, Ryan and Pochi are still gatekeeping as usual.
I and Mana were acting as teacher substitute.

「Well, I will teach you the basics of magic, the 4 major elements」(Asley) 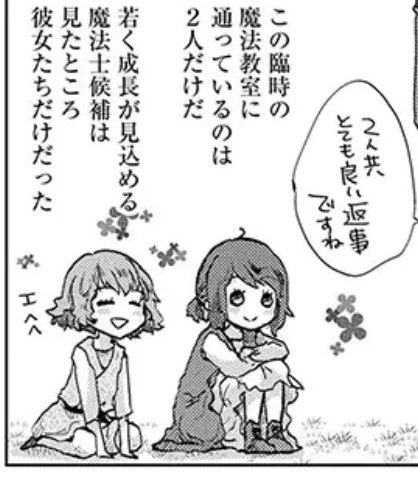 There are only two people in this temporary magic classroom, Rina and a 10 years old girl『Tifa』
From all the children I check, only the two of them are young proficient magicians. 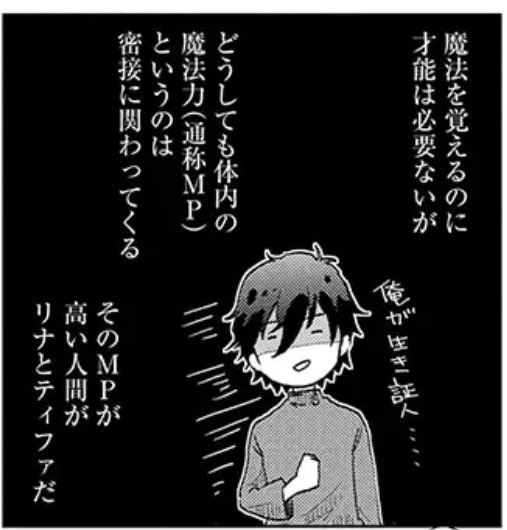 You don’t need talent to memorize magic, but magical power in the body, the so-called MP is deadly important.
People whose MP was high were only Rina and Tifa.
Tifa is a gentle child who knows the pain of others. She has green hair.

She doesn’t have parents anymore, but she doesn’t seem to be lonely thanks to Rina and Mana.

I was really surprised when she said that she decided to attend this class herself.
Incidentally, Mana is currently practicing the sword with the majority of boys and girls. 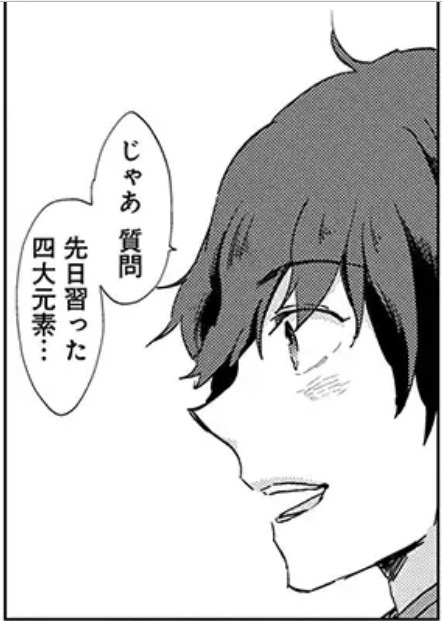 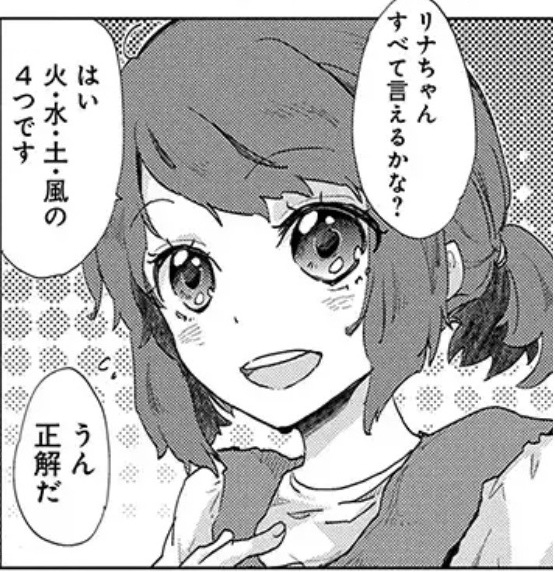 「Yes, they are: fire, water, earth and wind」(Rina)

「Next, Tifa, can you tell us the most manage-able element in all of these element?」(Asley)

Tifa was delighted with a full smile, she was really cheerful.
She also did the homework given by me diligently about magic…
Well, even if I say magic homework, it’s more like a guide for beginners. 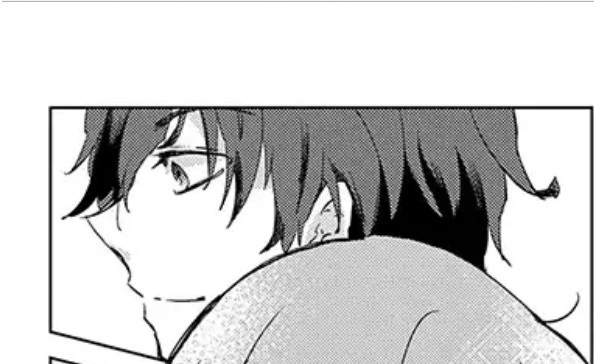 I also have been preparing for what to teach.

「So today we will actually invoke the magic foundation,
one of the four major elements」(Asley)

「About that… isn’t that magic dangerous?」(Rina)

For a moment, Rina’s face was stiffen.
Rather than showing kindness and say a lie, I should make the girls realize it. 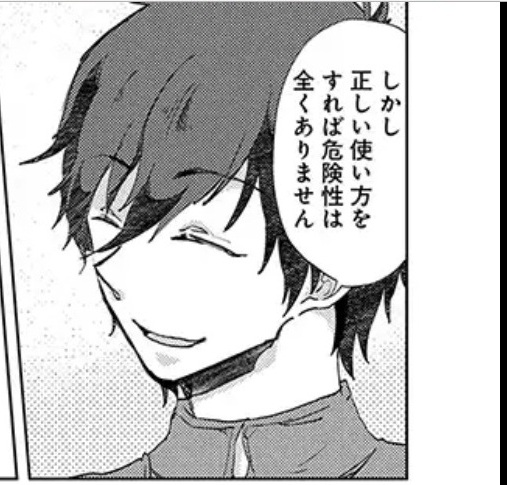 「However, if you use it correctly, there will be no danger at all.」(Asley)

「But as a teacher, I can’t recommend you testing it as you wanted on Pochi」(Asley)

「When you say it like that, I don’t know if you really want to make us feel relieved or not!」(Rina)

「You can activate it with a stick instead of a cane.
There are two sticks borrowed from the old women’s association.
Please come and get it」(Asley)

The two stood up from the seat and came to pick up the sticks.

「When you return to your seat, please stand as you are…
As I tell you yesterday how to draw magic pattern,
It is a technique called 『sky map』
Concentrate your magical power at the end of the stick and write with it like a pen, draw a magic pattern in the air.
You can use both hands if the stick is heavy.
Lastly, please put the tip of the stick in the center of the pentagram star after you finished drawing the magic pattern…
Now!」(Asley) 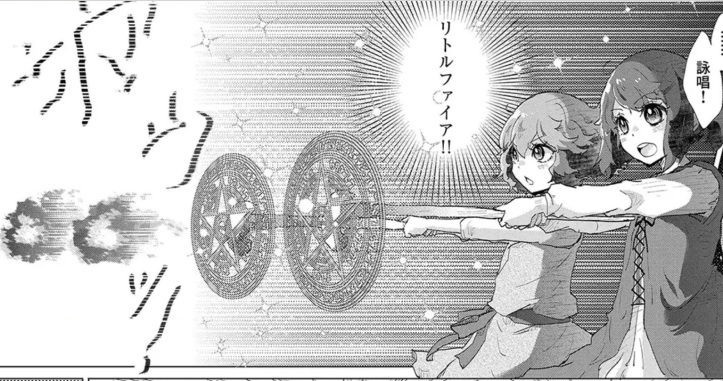 Simultaneously with the two girls’ shouts, 2 small fireballs appeared in the center of the magic pattern that were drawn in the air,

the fireballs flew towards the outer wall and snapped. 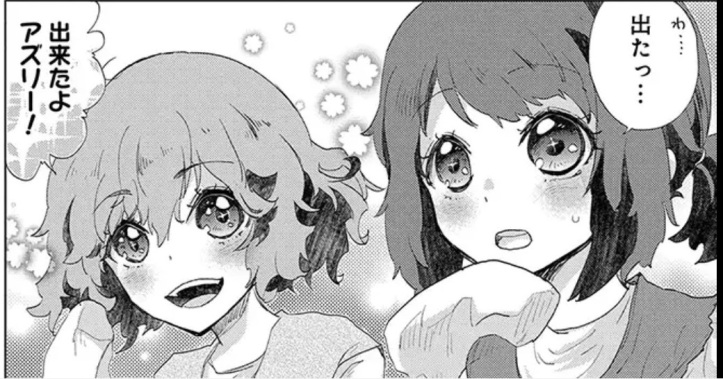 「It took me two weeks to activate it, but the two of you could do it in a day.
You tow are really amazing」(Asley) 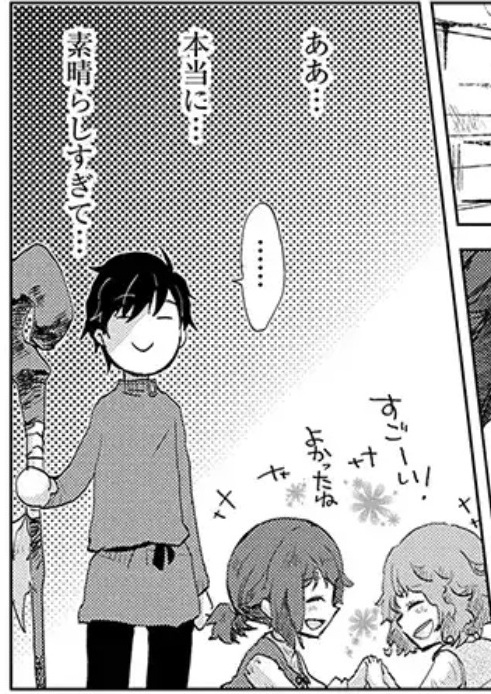 I’m about to cry in my heart about their talent.

It was a rare case that bothered the teachers of Magical College.

Magical Academy is an school for those who have high magical power and that school also put out written tests to some extent. 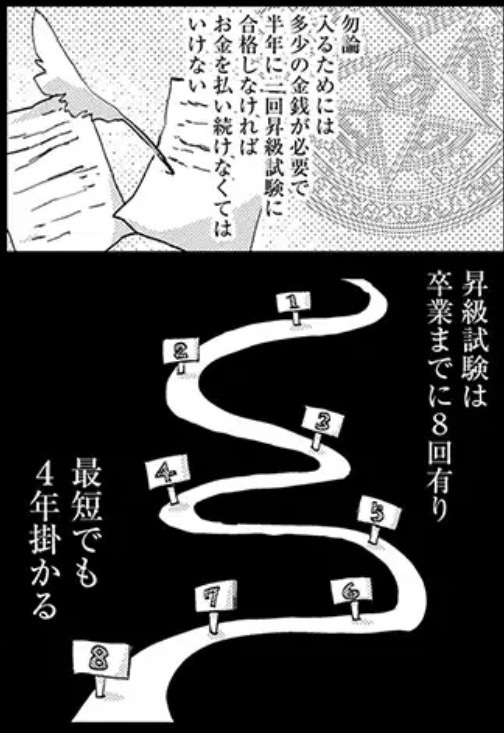 Of course, money is also necessary to enter and you have to keep paying more money unless you can pass the promotion exam once in half a year.

There are eight promotion tests before graduation, and it would take four years at the shortest time required. 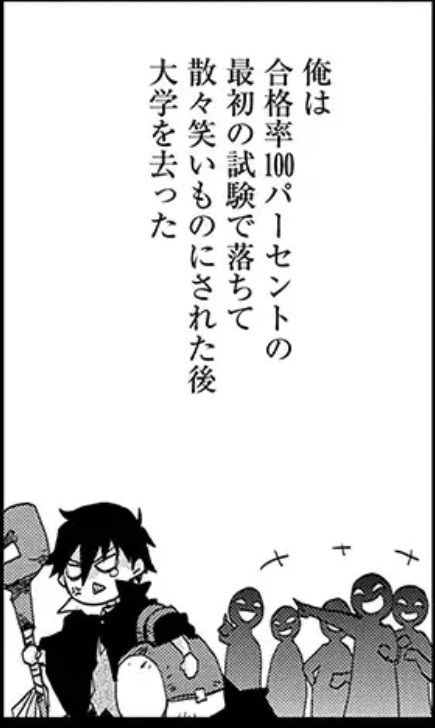 I failed in the first exam with a passing rate of one hundred percent, and after being made into a laughing stock, I left the academy. 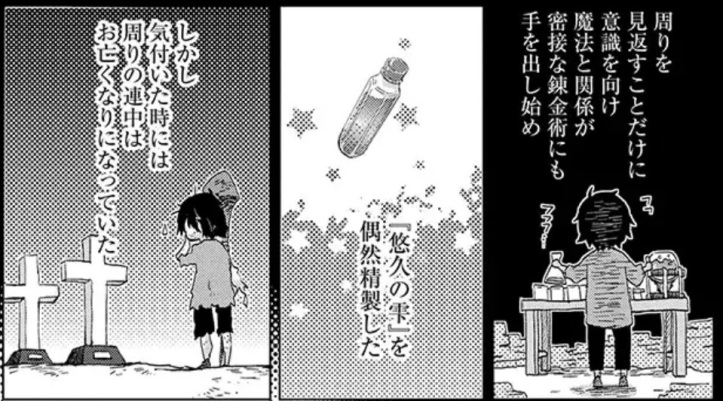 I turned my focus to looking around, started handling alchemy which is close related to magic and accidentally successed making an『Eternal drop』

And before I noticed, the people around me already dead by old age.
I do not know what I can do by myself,
but it may not be bad to watch over the future of talented young people walking step by step.

I don’t know what I can do
However
It might be fun helping these young girls grow up step by step. 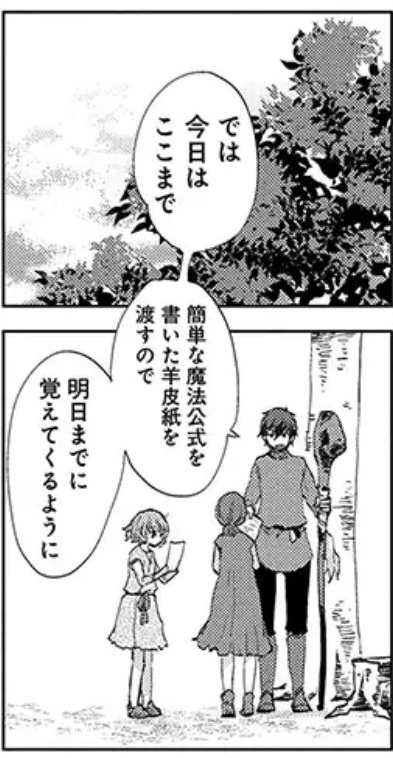 「Then, I will pass you the parchment that wrote a simple magic formula.
Try to remember it by tomorrow」(Asley) 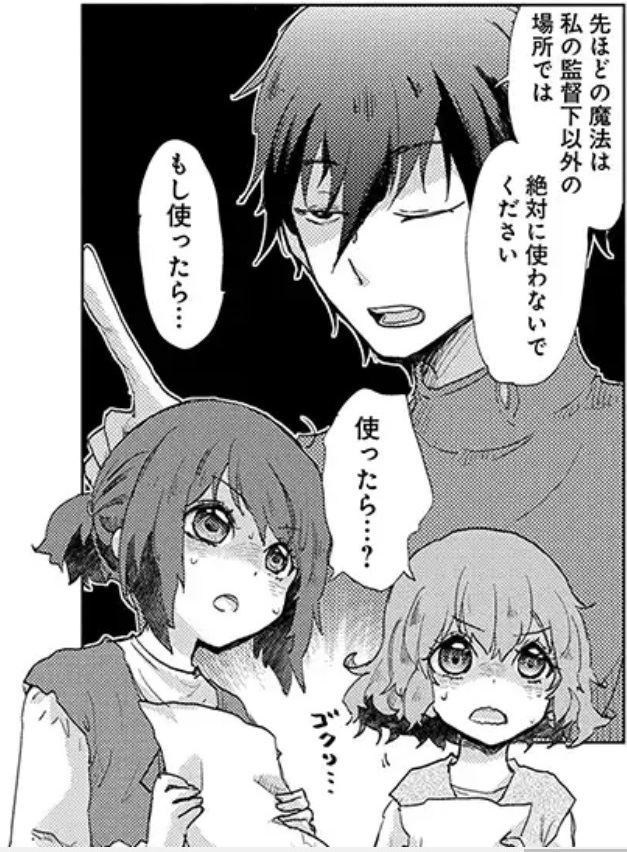 「Please don’t use the previous magic in any places unless you are under my supervision.
And if you use it …」(Asley)

Tension runs on the two girls’ face. They seem to be holding their breath.

「I will never teach you magic again ♪ 」(Asley)

「Well, I might be a little harsh with the two of them」(Asley)

Fire attribute magic is a very convenient magic, but it is also dangerous magic at the same time.
In this town, where a small fire may appear and burn the reconstruction away, we must “hammered down a stick out nail” (prevent) for such a danger.
Hammered it down so deep so that it won’t come out (happen).

However, it seems that magicians are decreasing due to this fact.
Magic Academy published licenses for magicians, it’s said that all magicians without it will be given a degraded name of being an informal magician.

Ryan who knew my circumstances taught me about it from kindness, but in reality there seems to be no law against informal magician.
However, it would be undeniable that such a magician would be disadvantaged if he caused problems.

I’m teaching Rina and Tifa in advance, but since they believe that they will be able to enter the Magical Academy once they grow up, so there will be no problem.

I finished the magic class a little earlier so I was on my way to the warrior class that Mana is teaching.
Warrior classroom is an open space.
It was done within the reach of the elders and the eyes of other women.
Of course, some parents didn’t want their children to join such class, but they didn’t force the children to stop either.
In the end, it is based on arbitrary participation.

「Oh Asley, I finally finished telling them about choice of weapons」(Mana)

In the past month, Mana and children had built a very friendly relationship.
Although Mana is still young, she is an excellent educator, who thinks about the children properly and firmly remember each person’s name. 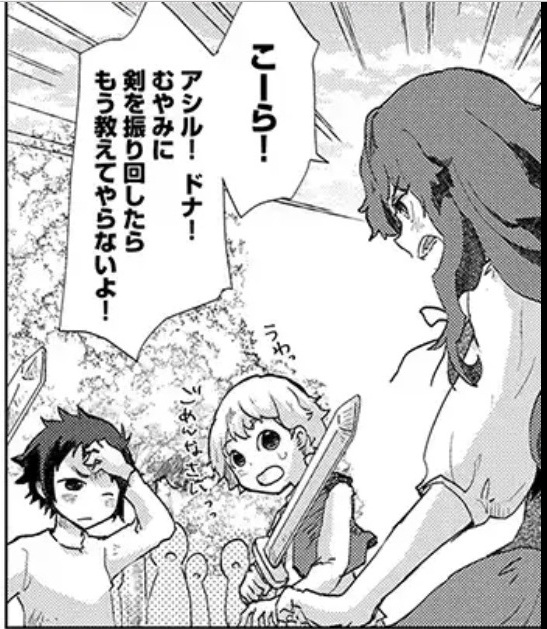 The warrior classroom has many children and many active children.
In the past, there was a hypothesis that the personality separates magician and warrior, but maybe such thing is really correct.

「Asley, would you have a mock combat with me for a moment?
I can’t ask the children, but I need to show them how to do it」(Mana)

I shrugged my shoulders and said so to Mana.
Mana received a training wooden sword from the child and laughed.
From the surroundings I can hear the crowd of the child and the cheers of the women who come to the well to draw water.

「I believed that you would say so.」(Mana) 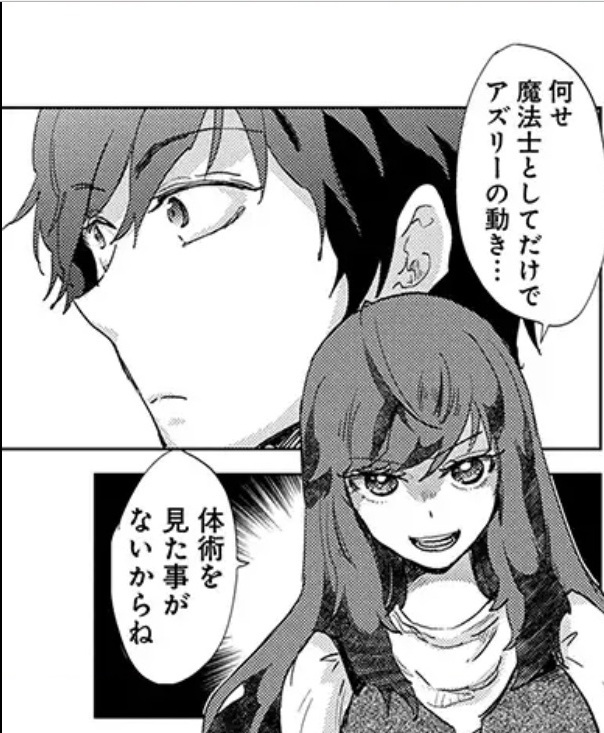 「But as a magician, Asley’s movement… I have not seen your staff art」(Mana)

「I see, then I guess it’s probably a little above average」(Asley) 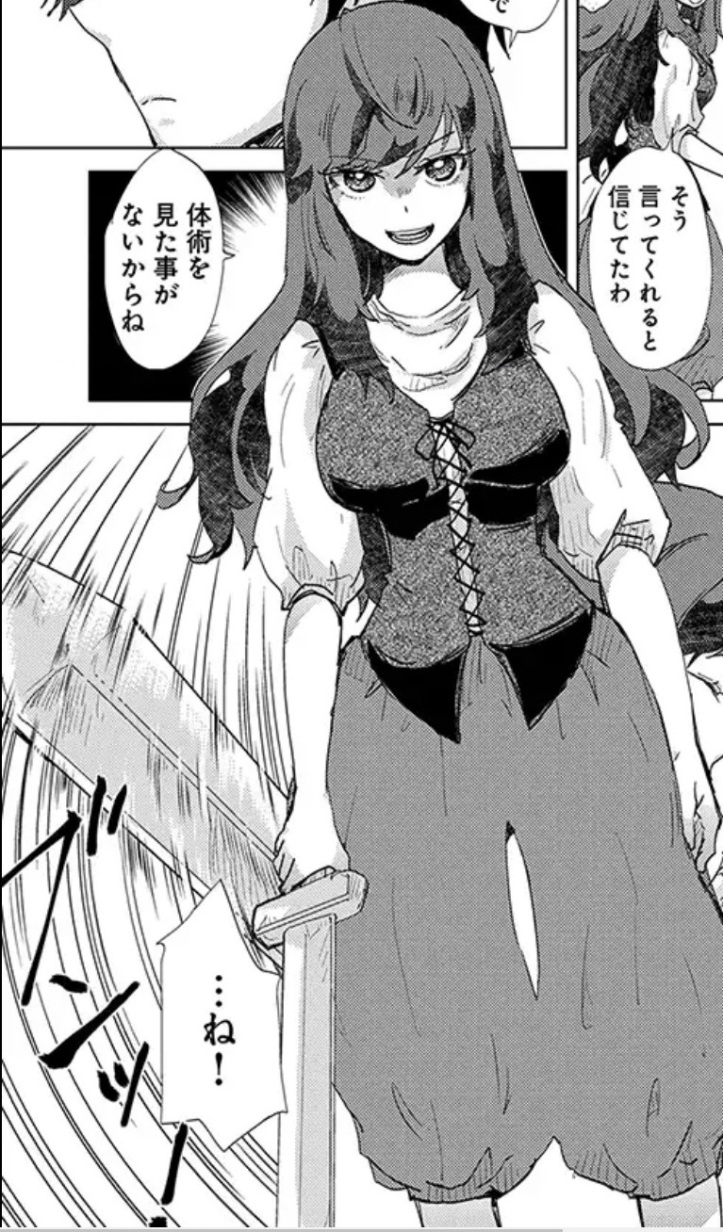 Mana swung the sword she just received at me.

I stopped the sword tip with my cane.
The sound that the trees and the bumps collide sounded in the square, and those working in the square also turned their attention to here.

「My relationship with this staff is long, maybe」(Asley)

As I said so, I jumped backwards and securing some distance from Mana.
Mana quickly closed the distance,

And swung down her sword right-handed and I step back one step.
And then Mana took one step further, released a reverse slash from there.
Although I was a little panic but I could avoid it backwards.

Mana was quickly moving to the action with a left front kick. 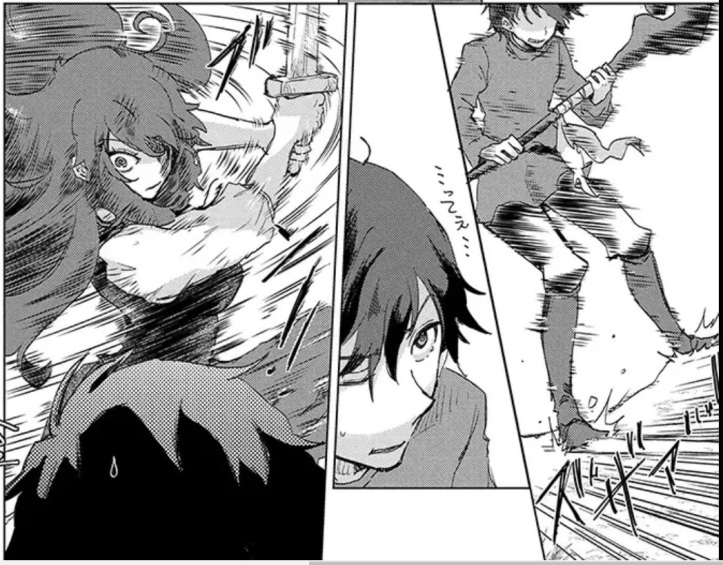 She kicked my staff and I was pushed backwards.

Mana swung her sword horizontally while chasing me. 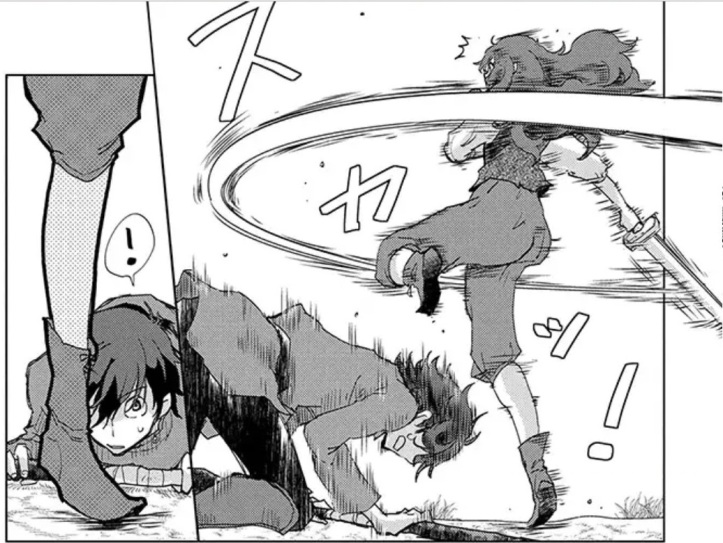 I avoided by crouching down.

Then I knocked on Mana’s unstable feet with my cane.
Even after losing her footing, Mana instantly use her other feet to jump up.

And then down slash me with both hands.

I rolled sideways and stood up with that flow.
Then I ran to Mana who still wasn’t fixing her stance after swung down her sword.

Mana tried to prevented my attack with her sword.
Then the sound of the echoing weapon collided again.

It was Reed who stopped us by putting the sheath of the sword between me and Mana. 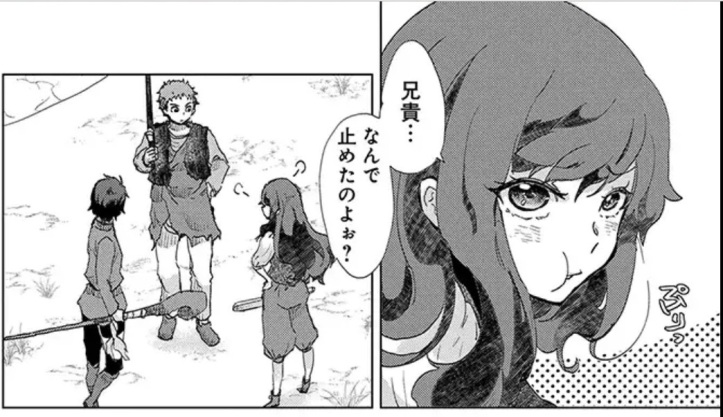 Mana was pouting as she complained to Reed.

「If you overdo it, you will just scare everyone, you know?」(Reed)

As she heard Reed said that, Mana looked back to confirm the reaction of the children. 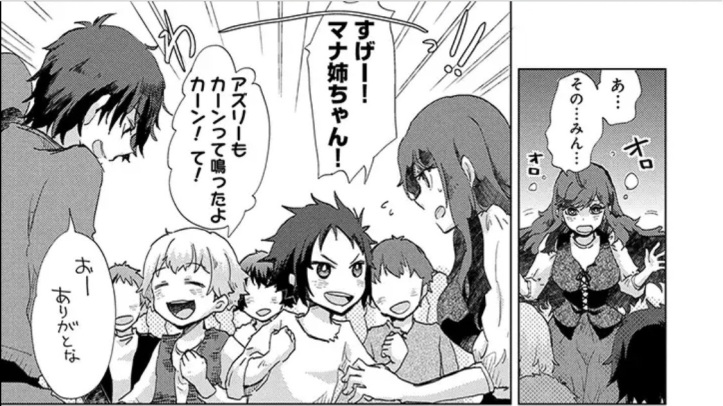 I wondered if she thought if she she was too enthusiastic.
Mana must be regret that she may frighten the children, but on the other hand, the children…

(T.N: The kid tries to make the sound effect)

They held their fists and praised us.

We got a word of praise from women and elders as well, Mana seemed to be embarrassed, her face was blushing red. 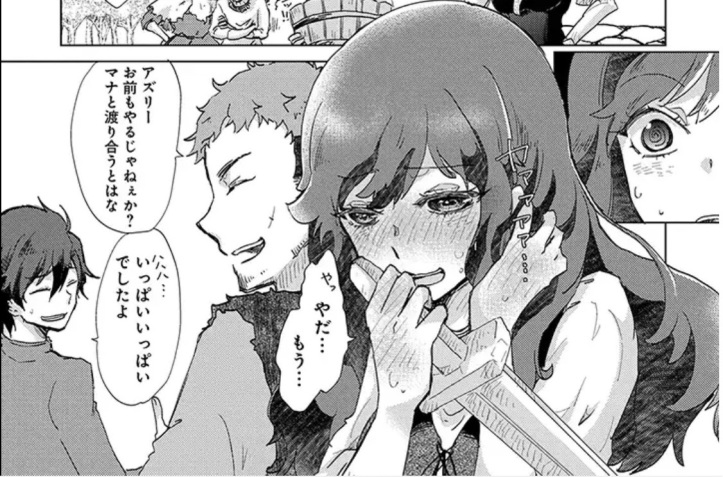 「Asley, you too. Please don’t go along with Mana’s selfishness」(Reed)

「Hahaha, but there were plenty of them」(Asley)

「However, If you fought serious, Mana can’t win anyway」(Reed)

「Hey, Aniki, what does that mean?」(Mana)

Mana protest Reed, she seems to forget the embarrassment of the previous time.
But she seems to be surprisingly childish like this.

「Because Asley still has magic and art, right?」(Reed)

「But, I also still haven’t used any skills yet」(Mana)

「Hey, beside attack magics there are also support magics」(Reed)

don’t you know it was the reason why the magicians were called monster.
Well, the story about six wisemen are also talking about it」(Reed)

Mana was pouting dissatisfacting with her small mouth.
Reed was patting Mana’s shoulder with a big laugh.

I am jealous of her having good brother.
I am an only child and a person with such relations with everyone…
Speaking of, perhaps Pochi may pat me, isn’t it. 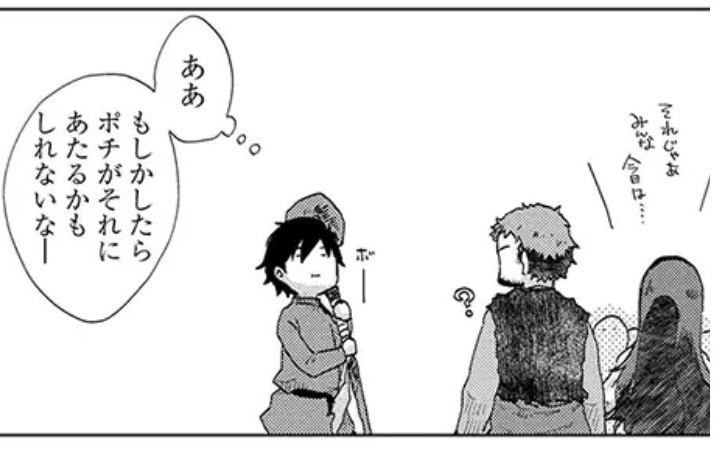 After this, the sun was setting as it was, the day ended without any problems.