『So, who in the world told you such strange things?』(Captain)

The Captain asked the leader of the aggressor farmers, it seems like the villager has changed his attitude and began to speak frankly, no matter how stupid he was, he must realize that the situation was very bad.

The farmer’s leader explained.
Six days ago, there was a man collapsed before reaching their village.
After the villagers gave him water and food, that man taught the villagers the tax reduction method as a sign of appreciation.
…such appreciation is completely absurd, it was obviously suspicious.
And that man just stayed only one night in the village, he has gone away the next morning…

『It’s a con artist, but there’s no profit for him.
In that case, was his purpose avenging his resentment with the villagers and wanted to ruin the village?
Or was it to cause a conflict between the villagers and the lord?
Creating havoc?
Was your village making enemies out of someone?
Like tormenting someone’s family members, killed the merchants on the trip and robbed money…』(Mile)

『What, there’s no way we could do such a villain things!』(Villager)

Despite the blue face, A farmers leader denied Mile desperately.

『Well, then this is gonna be a big problem … How is the situation in other villages?』(Mile)

『We received a one-sided tax reduction request from this village yesterday.
The lord only ordered me to refuse this request peacefully, there was nothing from other villages.』(Captian)

The captain answered to Mile.
But that man has been in the village in the past few days.
It’s possible that he just didn’t reach other villages yet.

『The man or his companions may be going around other villages.
If you don’t hurry up and deal with him, things might get worse…』(Mile)

The complexion of the Captain changed.
That was it is impossible, preventing the rebellions from raising in many villages at the same time.
It will be hard to control the situation, the lord will doubt the captain administrative ability and put more pressure on him.
He might face disposal from the lord.
In the worst case, he might get suspect to be an accomplice.

Even though he is a Captain, he is just a small officer class after all. It’s a disadvantage for becoming an officer.
Moreover, the local army of the lower aristocrat in the province shouldn’t receive a great military education either.
So, even if he learned about the crisis, he can’t make a judgment and decide a big action.
As Mile realized that, she decided to take the initiative.
Manga, animation, novel etc
She has the knowledge and she is dying for a time to use it to come.

『First of all, please dispatch one of your subordinates to other villages,
and ask them to listen to the opinion of the villagers there.
And make sure to let the villagers know that they must go to the lord town in order to say their demand to the lord, so you don’t need to deal with it in all villages.
And then, you will take these villagers, return to the lord town to prevent information leakage.
After that, you will report the situation to the lord and ask to dispatch covert squads at the same time to all the villages in the territory.
Those squads will grasp the situation and report the current position of the enemy every morning.
Well, since the lord will decide everything after you report, you don’t have to worry about it.
The first priority for all of you is to conceal that you already have noticed the situation and quickly reported to the lord.
Is that okay?』(Mile)

『Ah … oh …
Okay, men, you heard the lady, heading out to other villages immediately!
Others will come with me to the lord town immediately!』(Captain)

It seems that this Captain wasn’t very good at making unexpected and important judgments, but he never lacked the capacity to give the order to move.

A certain village girl found a man sitting on the highway near the village, anxiously talked to him.

『Ah, no, I just slipped down the slope at the mountain.
I lost all luggage, water, and food, I have not eaten anything for two days …』(Man)

『Ohh, isn’t it a big problem?
Anyway, please come to our village, because it is right there.
We have water and food, so please take a good rest in our village tonight』(Village girl)

The man nodded, after that, the man followed the village girl to the village.

The man drank the water and had a hot meal, thanked the village girl, her father, her brother.

『I would like to thank you for your help, unfortunately, I lost all my luggage…』(Man)

『No, I don’t really need you to thank us.
When we meet people in trouble, we should help each other.
Next time, if you help someone who is in trouble, that would be enough』(Village father)

The man was exaggeratedly surprised as he heard the village father said so.

『Oh, what a splendid person…
Okay, let me teach you how to lower the tax rate that our village had used to pay our lord as my gratitude!
Actually, the tax rate of our village was 50% before,
but we strongly demanded to the lord owner to lower to 30%, and he finally accepted it.
At first, the lord army might threaten you, but of course, they don’t dare to harm you.
If they actually capture or kill all the villagers, they will not get any tax, not even one grain of wheat.
If the villagers become aggressive, they will have no choice but pull back.
That the way it is…』(Man)

As the man continued speaking, he suddenly noticed, both the village girl, village father and village older brother were silent and expressionless.

When the man was wondering about the strange atmosphere.

Suddenly, he was screamed at by everyone in the scene.

『I finally found you!
The great criminal who suggested villagers to rebel!
I will kill you…』(Father)

The man turned to the silver hair village daughter who stopped her father, expected some help.

『Before that you should keep torturing him until you get more information!
Well, I don’t know if he would talk about it or not.  So, the torturing may not end, but you should avoid killing him…』(Village Daughter)

『… did he speak everything?』(Village Daughter)

『Yes, he isn’t a regular soldier but a disposable hired person.
So, no matter how many times we deal with this type of person, it won’t end.
And of course, such a person won’t know anything about who hired him』(Village Father)

The village daughter and father, no, Mile and the Captain from that time were talking so.
And in Mile’s mind, she was thinking about those imperial soldiers who had done trade destruction.

The Captain asked with a hard-to-ask face.

『Of course! I’m a superheroine, an unknown identity that helping the predominant one. I’m the 《dominant Kamen》after all!』(Mile)

Mile somewhat proudly replied to the captain so.

『But you had taken it off in the last few days and only to put it back now…, no, it’s nothing!』(Captain)

The Captain muttered so but decided not to point it out.

And then, that hired man spilled out that his employer seems coming from the empire, but he didn’t know if that was true or not.
Because his life is at stake, he didn’t seem to tell lie. His employer seemed just telling him so…

Although with this, the captain didn’t solve the problem all the way. However, he could prevent the crisis and could take measures to prepare for similar things in the future.
This incident will be informed to the territory and even country immediately. The Lord will give him a reward as he had prevented the country’s crisis beforehand.
So Mile’s intervention never be in vain.

As a result, after Mile and the Captain reported to the lord, he gave Mile 20 gold coins as reward money.
It might have been serious if they made mistakes for such big plot. It was rather cheap, such as 20 gold coins reward from the lord.
And the Lord didn’t mention a single word about the mask that Mile was wearing.
As if there were no mask or the like, he corresponded graciously.
…the lord is a nice person.

And Mile noticed.
Today is the fifth day of her vacation, the last day.
She can’t go back too late.
At least, she should go back before dinner and talk to everyone about the vacation.
But right now, the sun has already been set.

『This is bad! even if I ran with high speed, I will not make it in time…』(Mile)

And Mile decided. Using that 《emergency measure》that she was planning for an emergency case.

And Mile instructed the nanomachines after imagining the effect of that magic. (3.27 times more effective)

And, when she no longer felt the weight of the body, Mile gently kicked the ground with a ton sound.
She confirmed that her body floated up and the altitude became higher than the mountain around here. 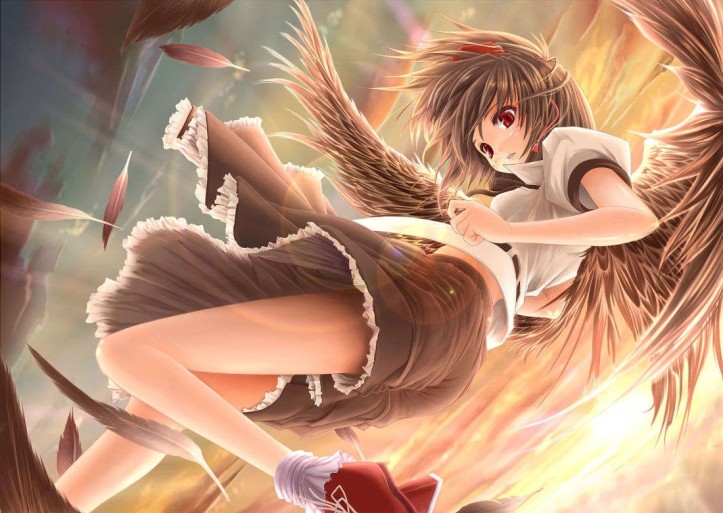 『This should be high enough.
Restored the downward gravitational force, with an angle from this point to the capital city.
Countdown in 5, 4, 3, 2, 1, now!』(Mile)

And Mile felt the continuous acceleration just like falling.

And Mile went back. To the inn where the kemonomimi and her friends were waiting, with a story as a souvenir.
She thought that if her friends heard about this attempt, she would be scolded so she kept quiet about this.