We fought and saw abnormal behaviors of monsters, so we decided to head to the mining city Kise sooner.
After leaving Raza town, we often have accommodation staying in the hill or a small village.

After we arrived, we put our horse in the stable.

Mining city Kise is a city built in Kise mountain where a large amount of deposits were found. Deposit (place where minerals gather)
There is no open pit since it is dispersed, but there are many galleries

The urban area settled at the foot of the mountain, there is somewhat enthusiastic feeling and there is a sound of striking iron from smithy-like places.
It’s this country’s idea of ​​doing smithing in mineral production areas.
However, there is one disadvantage of this city because of that.
As we are walking in the city, probably the main street…

『Ah, no, I can’t hear it unless you talk in a loud voice』(Cathy)

I must adjust the volume of voice while talking with Fina-san.

I can’t withstand noises everytime we talking.
The cluttered city has not been organized as a lot of sections.
Working sounds are ringing everywhere.
It makes a loud voice from here and there, and it is a little hard for passersby.
There are also many street vendors and it’s spurring the noise.
They sell a wide variety of metals from cooking goods to daily necessities, agricultural machinery and weapons.
Well, it’s lively.

I want to agree with Fina-san’s words, because I become hungry as well with the good smell.
There are many stalls that I see, but on the other hand, it seems that there are not many peoples eating.
Is it because people can’t settle down and eat on this busy people’s traffic.

『If we have time, I will look around when the report is over』(Fina)

Well, we won’t know until we get there.
As a result, although there was no emergency request, we still decided to receive a request at the soldier guild.
Recently, a huge amount of huge worms classified as monsters appeared in the gallery.
There is a high possibility that the weird movement of the Iron pill bug is due to the worms.
It seems that the problem has already happened.

As for this mission, the guild want us to help killing the worms and investigate the cause.
But even though worm is also a bug. however, to be honest, I don’t like it.
I prefer the request is about Iron Pill Bug on the road instead.
It appeared a place not far from this city, so I think that it should still be fine to do it slowly.

We go back to a place where stalls are placed.

Fina-san somewhat felt disgusted and complained.
She seemed to have a similar idea as me.

『Neil was an insect lover when he was a child. Wasn’t that right?』(Fina)

『No, I am not good with it now.
And how could you compare insect monsters and little insects?』(Neil)

That’s true.
However, Neil-san, a boy who loves insects … ….
The image is perfect.
But that isn’t like a lord’s son.

I will not comment on these conversations.
Just listening and having fun.

While I was dedicated to listening to the conversation of those two, we came back to the stall area.

Fina-san said so.
She responded to other sweets such as waffles and fruit sweets.
The foods that I can see on stalls are: Escargot, Arancina, sausage, doner kebab, chinese food …
There are a lot of foods from my previous life.
It’s very chaotic.
Ah, don’t tell me this is…
Yes, I found a familiar food. And I got closer.

It’s an elf man with a twisted band that doesn’t suit him.
It’s a terrible and incompatible combination …

Spherical shape, wrapped around a plate with iron skewers. 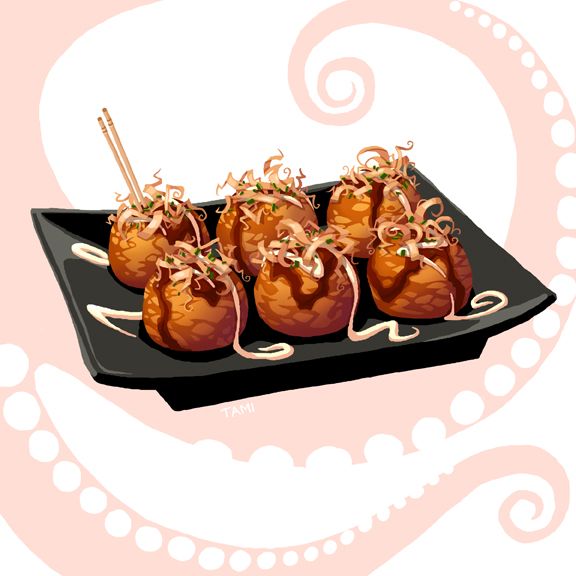 It’s really Tokoyaki after all.
I am glad that there are things in Japan.
I really want to eat this.

I made a mistake in the unit from my previous life.
Anyway, I made a mistake because Takoyaki was also placed on a boat type instrument properly.
What kind of material is this made?

『Okay!! … they are still hot, so be careful. Come again anytime!』(Shop keeper)

I paid the money and receive it.
It’s a little expensive, six pieces cost 100 Rusi (about 1000 yen).
Well, it can’t be help because this country is inland.

I have heard that marine products are imported mainly from the country of elves facing the south sea.
They mass-produced ice with water magic and used it to transport while keeping freshness.

The mister of a stall gave me three skewers, so I hand two of it over to everyone.
It has a bonito flavor, green onions, and sauce, but I wonder how it would taste?

『It’s true! I ate it for the first time, but it’s delicious』(Fina)

The outside is crispy, inside is simmering. The taste from my previous life is fully reproduced.
It’s the first time I ate Takoyaki in this world, the taste won’t lose to what I eat ten years ago.
Haa~, it’s delicious.
The octopus is also reasonablely fresh.

After that, we all checked around other stalls to fill our belly.
Then I was stared by Fina-san, it seems like she wanted to eat more Takoyaki. And I bought another pair of small steel plates for Takoyaki.
Why doesn’t she buy it herself …?
Neil-san had bitter smile looking at us.

After that, we took an inn located in a safe commerce area with reasonable prices.
We went to our rooms and finally unloaded our baggages.
Since we have time, we plan to go and see Neil-san’s new weapon with three of us until evening.
The survey of tunnel quest will start from tomorrow.
I removed the leather armor and stretched my body.

『Ooh, what a sight! Neil would have nose-bleed if he sees it … Ah, it’s nice』(Fina)

There wasn’t enough rooms, that’s why Fina-san and I stayed in the same room.
Because I stayed in the same room with beautiful woman, I felt a bit nervous.
Don’t mind it, don’t mind it.
I’m telling myself so.
Because this person is too sharp, if I care too much, she will mostly likely notice something.
I tied my hair with a head knot and it hurts so I put my hair down.
Fina-san also removes her accessories, only bring along the cane.
I also take the sword along. And we lock our room and go out.
Neil-san also locks up his room and goes out to meet up with us outside.

『Ah, that’s right.
Do you know that there are two great masters of blacksmith?』(Neil)

Blacksmith Van and Mark Weapon shop.
Two great masters, the two biggest brands of weapons of this country.
I heard that mass-produced equipments are made by disciples, ordered items and luxury goods are made by the great master themselves from scratch.
Both of them have their big workshop.

『Yes, because those 2 shops are in this city, I’d like to see it』(Neil)

『Well, let’s go, do you know where that shop is?』(Cathy)

『Oh, I forgot to ask a clerk in the inn, and I also don’t know where it is …』(Neil)

Really?
Well then, should we ask a locals-like person nearby?
Hmm?
And there’s a strange appearance behind Fina-san

Fina-san screamed and jumped off.

It was Nanashi-san.
It seems he was also arrived to Kise.
But, can’t he just appear normally?
Today, he wears clothes like a peddler.

『If you want to find blacksmith Van. You could find it at the crossroad, at the end of the stand, next to the right』(Nanashi)

Although we were saved from the trouble but…
Nanashi-san closed his eye, and replied to Neil-san’s doubt.

『No, no, no, this worm’s outbreak, it doesn’t seem like to be a natural thing again』(Nanashi)

『Well, since you already planned to go there, I wanted to ask Cathia to investigate the source as well』(Nanashi)

Did you know about the source?
I feel like he wants me to solve it as well.

『Wait a minute, isn’t that place the most dangerous place?』(Fina)

『Because it’s a source, it’s inevitable, there will be a large number of them.
This is a map of the tunnel』(Nanashi)

Nanashi-san just has a cool face.
For now, I received the map.
Well, it’s fine and it looks painful as well.

『Fina Raza, it’s what Cathia should decide by herself.
We don’t force her, we are only make a request.
And with Cathia’s abilities, there won’t be a problem』(Nanashi)

Fina-san was forcefully silenced by Nanasi-san’s rebuttal.
I appreciated that she worried about me, but he is certainly not forcing me to work.
A little awkward air flows on the spot.

『Because the tunnel isn’t so wide, that’s why we can’t have a large number of people coming. So do you want to accept it?』(Nanashi)

Well, there is no reason to refuse it, but there’s something I must be clear about.

『If the situation is getting out of control, we will withdraw.
So, can we block the entrance?』(Cathy)

Fina grabs her skirt with an uneasy face.
I caught a little bit of her pretty gestures.

It hurts!
Weird, I didn’t said anything bad to her, why did she slap on my back?
I wanted her to stop it.

『If you don’t like it, you don’t have to go with me?』(Cathy)

『I will be going as well.
Anyway, there will a problem if the peoples here can’t use the mines』(Neil)

If everyone is all willing to go, it’s necessary to judge the situation, if it’s getting out of hand, we need to withdraw quickly and carefully.

Oh!?
Fina-san seems to be in high spirit.

Nanasi-san passed through Fina-san, turned to me and answered.
Fina-san made an angry face.
These two people, maybe they are not compatible with each other.

Nanashi-san didn’t seem to finish his business yet.

『Shop owner of blacksmith van,
No, should we call him great master instead?
Well, anyway, Van’s job seems to have problem,
If possible, I want you to solve it too.
He has a big contribution in the armed of our country’s armies』(Nanashi)

Neil-san, who was interested in the store, reacts.
Yes, I don’t really know about blacksmith.
I don’t think that I can do anything to help with the craftsmen’s problem.

Nanashi-san had a cool face again.

『No, that is what you said earlier.
It’s ruined if you use it again now』(Cathy)

『No, Katia is really the right person in my intuition』(Nanashi)

As he said so, Nanashi-san silently left.

The matter of the worm is somewhat afford-able
But now, I was pressed with a request which I don’t know whether I’m really qualified.