T.N: There are still 5 world builder chapters but I stop at this chapter.

Gotta give other series some love, too.

Readers, what series do you want to be translated next?

Okay, in just 1 hour there is a lot of favor on Mitsuha and Kaoru.

So, I will translate Mitsuha’s chapter and Kaoru’s kidnap arc starting from tomorrow.

Maevis returned together with people from the guild.
She arrived at the guild yesterday at a rather late night, around that time people gathered to drink at the bar, it is quite easy to gather hunters and guild members.

But of course, the guild still needed to prepare carriage and the coach, and most people were against the idea to enter the forest at midnight, Maevis also understood that.
So it was inevitable that the guild decided to depart the next morning.

At midnight yesterday, when everyone was resting. (T.N: rest, not sleep, which means sleeping in turn or something)

Mile woke up the rest of vanguards back there, gave them some treatment with healing magic to a certain condition.
It would be a waste to sleep on that night.
She also gave some food and water from the item box to the men.
When curative magic is applied, the hunger and thirst are increased.
Cells that proliferate and repair aren’t created from nothing.

After that, Mile continued to question the enemy leader and other men about the ritual.

Because other than Mile, the rest of girls couldn’t understand the story well.
Then the girls decided to leave all the report to Mile and were on standby.
Even though other girls thought they shouldn’t just rely on Mile,
however, they couldn’t do anything even if they continued to hear something that they had never heard before.

And in the morning, Maevis finally brought back the support staff.
The carriage seems to be parked somewhere near the highway.

And Felicia, the receptionist talked with a tired face.

『I heard that the criminal has many magicians.
I wonder if you were reaping all of them unconscious,
I came for that reason』(Felicia)

It was not explained at all.
However, as other guilds and hunters also nodded, the girl felt like they shouldn’t ask anything, and they ceased to pursue further.

『For the time being, I’ve heard the story from Maevis of the 《Red Oath》,
I would like to confirm the facts from the other party, the 《Goddess’ servant》』(Guild master)

Somehow with this case, even the guild master also accompanied.
However, it’s unknown whether he was worried about the kidnapped loli, the hunter girls or his job if he did something wrong …

Certainly, this is a case about a large-scale girl kidnapping organization.
Attempted murder of the kidnapping beastkin girl by an anti-beast group,
The demon lord restoration or summoning, etc.
Whichever it is, It was a big problem.

Telyucia reported to the guild master.

『The innkeeper’s daughter, Faril-chan, was kidnapped in front of her friend.
And her father was putting an emergency request to Hunter’s guild.
Thanks to the 《Red Oath》, we discovered where the criminals are conducting a suspicious ritual.
After we defeated them, we rescued Faril-chan, who was on the verge of being sacrificed.
And the one that attacked first is the other side』(Telyucia)

It is too-brief as a report, but details of the story should already be heard from the Maevis.
This was enough, as it is only a confirmation whether the matter that Maevis has reported is true.
Whereas the 《Red Oath》seem to be a party of skillful hunters, they are still a newbie party.
While the 《Goddess’ servant》has been doing activities in this town for a number of years, it is a dependable party.

『Well, thank you for your hard work.
From what I judged at this work, you girls have greatly enhanced the prestige of the guild.
The guild will give you all an additional rewards and achievement points
In some case, you might even get the reward from the country as well』(GM)

『Well … If you do this much work and we only pay a single silver coin, it won’t be fair』(GM)

While laughing, the GM says so.

Then the 《Goddess’ servant》 girls holding hands with each other and joyfully jumping.
Unlike the insane 《Red Oath》, the 《Goddess’ servant》 went steadily step by step,
this victory is a great success that one can only dream of.
And their reputation as well, they might rise from the low rank of C rank to middle-rank evaluation at once.

And then, the guild members and hunters tied up the criminals, brought them to the carriage near the highway and began to advance towards the capital.

All the vanguards men are no-harm as long as they are tied up and have no weapon.

But for the magician men, the guild not only tied them up but also put the cloth gag into their mouths, blindfolded in preparation for a non-chanting magic.
And there were also guards keep watch, they readied to hit the magicians if the magicians did anything suspicious.

After returning to the capital, those criminals will be interrogated.
But it’s not the role of the guild but the royal guard, or the work of the royal palace.
At that time, the hunter girls, especially Mile will be asked on occasion,
but since they will be rewarded, no one has any complaints.
Especially the people of the《Goddess’ servant》

The《Goddess’ servant》and the《Red Oath》are walking on the highway together with the carriage.
Faril-chan was sitting on Firii’s shoulder as the girls walked.
Mile desperately wanted to take that role, but she was dismissed with the reason《her body is small and unstable》and Mile was shedding tears of blood.

And after the girls walked for a while.

Telyucia was talking to Rena while walking.
Since the girls didn’t bother to say their age at the time of self-introduction,
the members of the 《Goddess’ servant》think that Rena is about 12 to 13 years old.

『Rena-chan, although both your magical power and magic talent is high.
You are certainly strong as a C ranked hunter.
But you depend too much on your power, you aren’t careful about fine details.
Don’t let your guard down.
Considering more collaboration with your friends,
And don’t take your attention away from your enemies except for those who already confirmed dead completely.
It should be easy to do it, even children can do it!』(Telyucia) 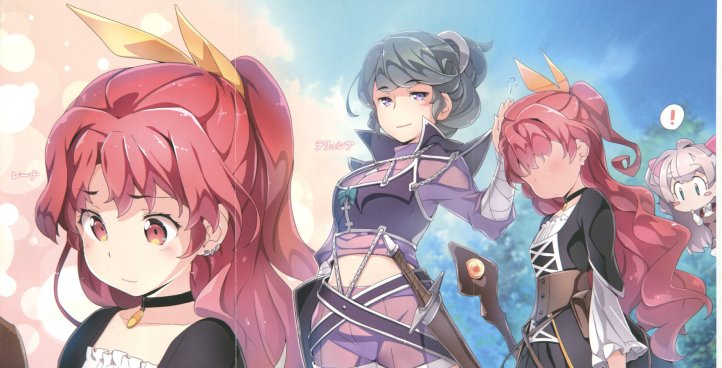 Telling that, Telyucia pat Rena’s head lightly with a pon pon.
And, Rena’s face was down and was a little red.

Mile’s trio were panicking.
They knew Rena disliked those the most:

Being treated like a child,
Pat on the head with a pon pon.
Saying even children can do it

It is a perfect three combo.

Then Rena got a little down and muttered.

Yes, Rena had lived in a harsh and tragedy life.
Everyone who was dear to her, those who cherished her were all dead.

She trusted the comrades of the《Red Oath》
But they are all equal position, naive and are not aware of common sense.
As the one whose hunter’s history is the longest among the group and the one with the most common sense. She thought she had to help them.

They are an important existence, the one she can leave her back to.
the one who will help her without worrying about themselves.
They are absolutely trustworthy, dependable, amenable existence.

But Rena, who lost her father and all of the 《Red Lightning Bolts》
She was seeking an existence she can depend on at the bottom of her heart.
An important existence, the one she can leave her back to but also can act spoiled with.
The one who will help her without worrying about themselves.
An absolutely trustworthy, dependable, amenable existence.

And then, someone saved her life
An older woman who stood up in front of the enemy’s offensive magic.
It was no wonder Rena was charmed.