But it’s long, it will take more than 1 day to translate 1 chapter.

So I will translate Kaoru daily instead,

I will also translate Mitsuha chapter 35 part by part every day.

After finished Kaoru’s arc, I will release Mitsuha chapter 35 at the same time.

If you ask why I can release Mitsuha and Kaoru in just 1 days.

Because I already finished translating about 80% of them before.

Taking dinner with everyone, Roland and Francette got out of the room

Emil and Bell were wandering in front of Kaoru’s room.

Emil hurriedly corrected himself because calling Kaoru with “-sama” was prohibited, although the person herself wasn’t there.

『Is she sleeping soundly?
Is she going to the washroom?
Or has she went down to the first floor and have already eaten?
Well, … let’s go down, for now.』(Roland)

The three others followed Roland and went to the stairs because they didn’t have the key, they couldn’t suddenly break the door and enter either.

When Roland got off to the first floor, he asked the innkeeper and the receptionist lady immediately responded.

(T.N: Innkeeper and receptionist are 2 persons, Roland asked the innkeeper but the receptionist heard that and answered)

『Oh, the black-haired girl?
After she took a room, she went out immediately』(Receptionist)

There might be a peculiar place she wanted to visit, and there would be no problem for Kaoru because she has money.
Even if she went out for a walk, she would definitely return by dinner time.
Kaoru is such a person, of course, everyone knew it.
That means… if she couldn’t return at her scheduled time, a problem has occurred.

Roland said so and gave the key of the room to the counter, Emil also followed after.
The female team also followed the men’s team and dashed out of the inn. (T.N: Yes, how could I forget the verb dash)

Well, what should I do …
This place seems to be a hidden room in the basement of a house located in the city slums.
That one corner of the basement is separated to hide the cages.

These kidnappers have captured four children, including me, from 5 to 6 years old to about 10 years old.
… I will be 20 years old soon, don’t lump me in there!
Ah, I mean, I decided the day when I first came to this world as my 《15th birthday》
I also celebrate it as my birthday properly every year.
All by myself. (T_T)

When I invite people, I will be asked how old am I, so I don’t invite other people for my birthday.

Well, let’s leave it alone for now.
I wonder what I should be doing now.
This hidden room is small but divided into 2 parts: 1 part with a kinda big table and 5 or 6 chairs, a cupboard and some wooden boxes.
And this part of the room is a prison, half of which is partitioned by a solid wooden grid…
It only has a small table and a chair.

Inside the room, in addition to us, the prisoners, there’s a guard that’s around 20 years old is sitting alone on the chair to keep watch.

Well, she might have been handled roughly when she was caught.

A loli around 5 to 6 years old, who seems to be the youngest was moaning in pain while putting her hand on the left shoulder from a while ago.

I can’t let such a cute loli suffer without doing anything!
No, even if it was a young boy, I will still treat him. It’s true!

Well, for the time being …

I put my right hand on the loli’s left shoulder where she seems to be in pain
… and generating a healing potion in my palm.
Meanwhile, my left hand was pointing towards the man sitting outside the cage.

And then the man stood up screaming.

The man that stood up from the chair, he looked at me with his bloodshot eyes and yelled.

『Eh?
No, I did nothing.
Because this child seems to be in pain, so I stroke her,
I just say a magic spell to distract her.
Look, like this.
Pain pain, fly away!』(Kaoru)

『Guha~a! Stop, stop it right there, or I’ll make you stop …』(Man)

While saying that, the man held the handle of his sword.
And I gently smiled at him.

『Huh? Is that okay?
Well, I have other spells like 《sword’s tip, sword’s tip, fly away!》…
However, if I cast that curse, there might be people who got stabbed by the sword’s tip …』(Kaoru)

The girl looked up at my face with a blank face and changed to a smiling face.
Yes yes, a smile is the best for such a cute loli like this, isn’t it?

A man who seemed to be the leader of these kidnappers opened the door.
He isn’t from the four who kidnapped me.
He is around 30 years old, an average person with a relatively serious look.

Well, even in yakuza and organized crime groups,
the bottom end members look rough and stingy,
but the upper echelons might look average at first glance.

Well, that’s right. “I don’t point the gun at my wife’s guy friends,
I don’t cut my daughter’s guy friends’ fingers
I don’t look like gangsters at all”

However, his eyes’ perception is sharp
… Stop talking about the eyes.
Well, I don’t want to be told so as well

Only the leader came into this room.
It seems that the guard just now, said that he was so scared and did not followed.

『Eh?
No, nothing.
The guard keeper was just sleeping just now,
Suddenly, he waked up like having a nightmare,
and then he jumped out of the room…』(Kaoru)

I grasped both hands lightly and fitted it in front of my mouth as I tried to say so.
This is so-called
Scared captured daughter’s pose.
I always wanted to try it once. 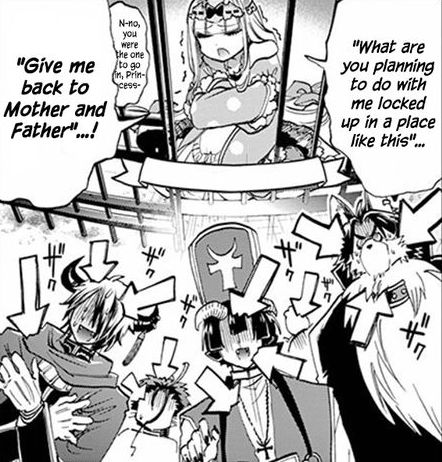 Of course, I won’t do this when an acquaintance is near.
Otherwise, they will feel creepy or laugh.
《It doesn’t suit you》or《It is creepy》
…Shut up! (Urusai wa!)

That being said, the leader left the room again.
Yeah yeah, do it in the other room, don’t be so selfish.

『 Is there anyone else that’s hurt?』(Kaoru)

The two lolies who were still comfortably fitted in my arms shook their heads.

『Do not worry it’s okay, because help will be coming soon』(Kaoru)

A cute loli about 10 years old asked while looking up at me.

『Well, well, let’s wait at ease, until then.
Oh, would you like to play some games?
It’s easy to play, so you’ll understand immediately!』(Kaoru)

If I wanted, it would be easy to escape or call for help.
Like using an explosion to attack those kidnappers. But it’s hard to control so I might cause damage to the surrounding as well.

I could also make an explosion like in the war before, a golden cloud pillar, Roland and Francette will soon notice.
But it’s still too early to do it.
Because the mastermind has not appeared yet.

(Beautiful young girl) Bishoujo kidnappers …
I will not remove the character of 《Bishoujo》 here, and I don’t accept any objection.
Anyhow, I don’t think that those《Bishoujo Kidnapper》are only the 5 young men here.

If you think about it carefully, those 5 may have kidnapped the girls,
but how could they transport the kidnapped girls outside of this castle town?
There wouldn’t be any idiot who dared to buy kidnapped girls from the same town.
Perhaps they have company.
They might be a merchant, a powerful person, a criminal organization,…
That is a staple background in a historical drama.
There is no doubt!