Attempted murder and betrayed those who they hired.

Heard that phrase, the hunters tried to attack.

Far from losing credibility, they will certainly lose their hunter qualifications and become criminal slaves of 10 to 20 years.
If that is the case, the hunters would rather turn into real bandits, catch the girls and sell them to other countries.

The noble’s daughter who has the stupid storage capacity, she is sure to sell at a very high price on the black market.
Those stupid woodcutter guys will get all the blame.
After killing them and burying their bodies.
They will become the scapegoats who might attack the girls and already escaped.
Or perhaps, other people will think of it as the work of the active bandits, without suspecting those hunters.

The hunters went all out to kill for preservation and making money.

『… as expected, we got some (boro) stupid who can’t read the situation out there』(Pauline)

『Shut up! So what?
Anyway, your destiny will not change!
I thought of a good idea but they are stupid people.
Heck, only if you hired us as escorts quietly.
I thought about putting that storage girl in my group. But now it has become like this. I will sell her to somewhere at the black market.
It’s regrettable, but it can’t be helped…』(Hunter’s leader)

It seemed like they planned forcibly to make Mile their companion.
They only mentioned Mile.
The other girls’ destiny won’t change anyway, so they already planned to do some with the other three…
Apparently, it seems that the hunters were more malicious than how the girls thought.

And it wasn’t surprised.
Because for those hunters…
Those woodcutters are just some amateurs about fighting, even if four of them might lose to an apprentice knight who is receiving regular training.
Besides, the hunters thought that those woodcutters just didn’t dare to hurt the girls, such action would be considered a crime.

Still, they didn’t consider that there were only a few tens of seconds before they ran.
Some amateur wouldn’t be able to knock down 4 adult men that fast and easily.

Anyway, in the hunters’ perception: 《 the decent enemy is only the female apprentice knight》

The noble-lady might have the sword in hand, the big tits maid and the little red hair girl just have their staff for self-defend.
Meanwhile, the hunters are C-ranked hunters, they thought they are way stronger than the apprentice female knight, and they are four people.

With that, what side do you say that will win?

By the way, what Rena said to the other two is a phase from Mile’s 《Japanese Fukashi talk》 about a daughter of a nobleman. Lady Penelope Creighton-Ward or Doronjo-sama.
Anyway, because it is a phrase frequently appearing in Mile’s Fukashi story, it is a power word that has been imprinted in everyone’s head.
Mile and Maevis unleashed the sword.

Two metallic sounds and two dull sounds each, which sounded in two sets, and four hunters fell on the ground.
Of course, because it’s due to flat striking, the girls won’t kill people unnecessarily.
The western sword is different from Japanese sword
It’s always more sturdy, even with flat striking, it will not break at this level.

Especially for those swords reinforced by nanomachines.

Everyone nodded to Rena’s words.

『 However, isn’t it a bad thing …』(Maevis)

『Well, since they were involved in the bandit’s action.
So we must detain them all until we can get a detail examination.
If we let any of them go, they might commit some crime after getting away.
I do not think so.
That’s why we should capture all together for the time being』(Rena)

Mile and Pauline are somewhat nervous nodded to Rena’s words against Maevis.

It doesn’t matter if this their first crime or not, both groups are guilty and can’t be spare.
What if the one gets away continued their thief act?
Then can the girls report the request?
Won’t the guild raise suspicion “did they truly exterminate the bandits”?

And Mile’s group, of course, continued moving towards Kaldyl town as scheduled.
After burying the second group properly in the ground.
The woodcutters who acted as bandits were buried together.

The girls heard their defense, but that is only 《the criminal insists like that》
And for the time being, they are still considered as bandits, so there is no problem at all in responding appropriately.
Besides, innocent or guilty is for the higher up like a judge or guild master to decide, the girls themselves can’t decide and act on their emotion alone.

However, in order to keep them not to be killed by the beast, Mile used metal cages to cover their heads properly.
Of course, Mile also casts a barrier magic.
They will be safe for a while.

And, after walking dozens of minutes.

A man of a traveler who was resting while sitting on a rock by the side of the highway closed the hand suddenly standing up and men who seemed to be bad from the other side of the corner beyond that came out.
We are going to over-eat today. There is too much feed.

And in their back, there are also some men blocked the path.
About 10 people in the front and 5-6 in the back.
It’s within the range of the anticipated number of the bandits estimated from the damage situation so far.

The other girls nodded with Rena’s words.

As expected, it is unlikely that the bandits of this size would work in the same place.
It was fortunate to meet them on the first day.
Not for Mile’s group but for the 《buried people》

If the girls are late to dig them up, they may grow roots and rhizomes.
Or get rotten… 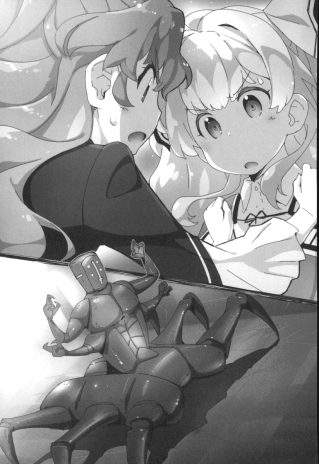 《Mi》 is how Mile calls the machine that Rena explained about in the ruins they fought with the devils.
Mile is tolerant of parodies, homage, respects, etc., but was strict with plagiarism.

(T.N: Mile must watch Zombie anime/manga too much)

Rena and Mavis shouted like Mile is some big shot.
Lower aristocrat’s daughter isn’t 《Her highness》
Her role isn’t a royal princess …

But that was Mile’s strategy.
To see how much information the bandits have gotten.

『 Don’t make me laugh, she is just a daughter of a low-level noble.
And no matter how great her position is, it’s your fault to go on a journey without an escort guard.
You are a rare one, young misses.
Let us prepare a more proper place!』(Bandit’s leader 3)

Because the bandits spilled all their information too easily, Mile’s group were half relieved, half surprised.
With this, it was confirmed that everything they talked about in the guild was transmitted accurately.

Rena has a bitter smile.

There is no need for the 《Red Oath》to investigate deeply.
Because it was the job of the hunter guild and the town guards to get information from the captured bandits.

The 《Red Oath》is just to catch thieves.
Confirmation of the source of information leakage is a service, it’s only a backup to grasp the existence location of the remaining enemy.

So, without holding anything back, the girls only need to annihilate the bandits.