This is a small city on the frontier, which is very close to the eastern part of the Murein Kingdom.

It’s also near the border with the neighboring country.

Although it is small, there are branches of the Hunter Guild and commercial guilds.

It’s still a nice city.
It’s a 【city for the countryside people】

It’s about 2 ranks or 3 ranks lower than the big city.
Yes, it’s in the countryside.

Actually, the common civilians of the frontier, who are not merchants, won’t abandon their hometown.

Some of them haven’t even gone to the Capital once in their lifetime.
For them, this is the【city】
That was a small city in this remote area, Mafan
It’s not too rural or too poor.
There’s a river with fresh water running through the city.

But it wasn’t so bad that they would be at war any time soon.
It wasn’t a big problem.
And this city made money as a relay point of the trade route with the neighboring country.

『We are on the journey of training, how can we afford to relax here?』(Rena)

They have decided after carefully observing other inns in the city.

…Well, if they don’t like it, they can change the inn anytime.

Prices, room facilities, and cleanliness, cooking etc. are no problem.

The inn’s staff is the owner couple, one chef around 30 years old, and a waitress about 17 to 18 years old.

Their children seem to have gone to live and marry in the Capital City.
They have no choice but to hire a cook and a waitress.

And when Mile asked if the owner couple can cook.
They looked away.

For normal humans, there should be one or two things that they don’t want to tell other people.
So, Mile couldn’t hear anything more than that.

The waitress Mitera is quite rough, she doesn’t care about children like Mile.
She has red hair and freckles, her face is somewhat good-looking, but her mouth is bad news.

No, it’s still fine to be enthusiastic
…Yes, that girl seems like an ideal 【waitress at a Liquor Bar】

Because she is about the same age as Maevis, 18 years old
She wants to get involved with Maevis.
No, apparently she doesn’t seem to be bad.

She just tried to drag Maevis into going shopping together on a day off, meet up when she is in trouble, persistent following…

『Well, it’s because she wants to go around with you instead of a lover』(Rena)

Maevis is shocked to hear it. 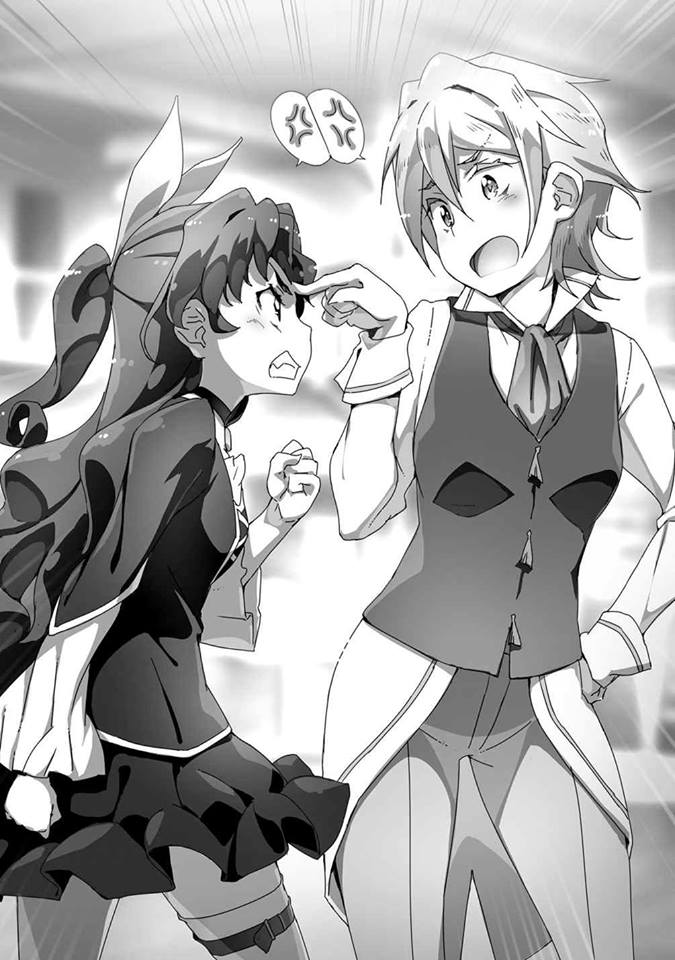 『There’s also a girl with red hair and bad mouth here as well!』(Maevis)

As expected of Maevis, she hated badmouthing others, and she was kind of blind to the obvious fact.
And Rena, who is kind of hot-headed. She can talk quite intense about people.

Mile is panicking.
Pauline gave up and just shrugged…

『Well. It’s time for the first request in this city. Is this okay?』(Rena)

And 【Red Oath】 tried to receive their first request in this country, in this Hunter Guild.

When Rena tried to pick a request, Maevis and Pauline also agreed to it but Mile stopped them.

Rena’s group looked at the direction, pointed by Mile.
There is a paper pinched separately next to the request board.

【Constant request: Subjugation of the outbreak of monsters in the forest
Reward: one gold coin per person】 (Notice)

Rena raised a question as well.

Monster’s outbreak in the forest?
Such a thing is rare.
Unless there is something unusual.

And, if this request is really important, it won’t be just a constant request but a forced-participation request for hunters C-ranked and over.

We do not know the reason…

When everyone went to the counter and asked for the explanation, the receptionist explained it with a troubled face.

『You came from other districts so you didn’t know.
Actually, that request has special circumstances…』(Receptionist)

According to the explanation, this town is close to the border with the neighboring country.
And part of the border seems to be a deep forest.

And it seems that on the other side of the border forest, the neighboring country regularly purges the monsters of the forest.
… Not 【subjugation】 or 【thinning out】 but 【chasing away】

And the chased monster escaped to the opposite side.
In other words, toward this country.

And then, a territorial dispute began with the monsters originally from the other side.
Some monsters moved further to this side, they attacked the residents around the forest area.
They killed the livestock and damaged the crops as well.

Those monsters can be killed, but if the farmers asked for the same request every time, farmers will go bankrupt.
For that reason, the lords are issuing troops.

But the Lord Army is made of the soldiers whose main duty is to prevent invasion from other countries.
Their training mainly focuses on interpersonal fighting.
Therefore, they can’t deal well with monsters, which are outside of their area of expertise.
They aren’t good at it.

Besides, although they are dedicating their life to defend their country.
They are willing to die fighting enemy soldiers.
But they don’t want to die fighting some monsters.
Or become injured and be forced to leave the military service.
The moral of the soldiers wasn’t high.

In addition, even if the monsters only appeared a few at a time, the soldiers still need to search and kill them thoroughly.
It will certainly wear the soldiers out after repeating it a few times.

Therefore, the Lord had decided to hire some Monster Hunters (T.N: puns intend), who are accustomed to the job…

『However, Army soldiers and hunters have bad relationships.
Disputes frequently occurred.
And there are some hunters who hate to follow the soldier’s order …』(Rena)

The receptionist nodded with Rena.

『Yes. The Army soldiers hate doing such requests.
They are prideful and doesn’t like getting hurt.
They used the hunters, who joined in as requested, for the dangerous roles.
And the soldiers also don’t want to support the hunters.
No matter how many lives they have,
Normal hunters would not bother to receive such a request,
Unless they have big trouble with money,
Some maniacs who try beyond their limit,
Or some idiots…』(Receptionist)

The receptionist’s face changed with her anger.

『This is completely harassment by neighboring country.
They purposely drive monsters to our country!』(Receptionist)

Rather than the “situation” (In EN), it’s more like the result.
And of course, the reply of 【Red Oath】 is…

The receptionist was dumbfounded.

『No, no. Didn’t you listen to what I just said?
Or are you in trouble with money that much to receive such a request?』(Receptionist)

『Yes, the third one.
Because 【we are some idiots】
Is it a good enough reason to try this request?』(Rena)

The receptionist, other guild staff members, the hunters in the guild heard it and got quiet.

The inside of the guild was wrapped in silence…