I can enjoy the fish dishes here, then I can go east along the coast to the next country.
Well, I don’t need to hurry, it’s okay to stay in this country.
But after everything I’ve done, it seems better to move to another country quickly.

I don’t want 【that】 to hear the rumor and come all the way into this country from the Brancott Kingdom.
【That】 will not care about the neighboring country, he will surely abuse of his power and position, what you can expect from Fel.

Besides, before I can find a companion and settle down somewhere, I also want to go sightseeing around this world.
If I can have a child and a husband, I won’t be able to travel around the continent or do anything.

By the way, what about Francette and Roland?
Emil and Bell are orphans, they are still young, so they can travel a couple of years.
After learning and saving enough they can even settle down somewhere.
Or returning to the Balmoa Kingdom with everyone in the 【Goddess’ eyes】
It would be nice to live together.
At that time they also have the skills, they can work as hunters or 【secret escorts】, or with the money that I have saved for them in 【Emil and Bell’s Piggy Bank】 in my item-box to open a shop.

Well, I will leave everything to the two’s will.

…but if it’s something, 【We will live in the neighbor, next to the place where Kaoru settled down, I will protect you for the rest of my life!】
I’m afraid that you will answer with something like that.

But that’s also okay, it’s one of the two choices.
I can’t complain about it.
No one human being can decide the lives of others.

The problem is Francette and Roland.
They are two single people traveling… NOT
Fancette has families and relatives in the Kingdom, and Roland is the Royalty in the first place!
It’s impossible to abandon the country like this.

Well, as long as the King has children… No, even when his brother, the king has a child, Roland still has the right to succeed to the throne.
And even after Roland’s nephew became the next king, Roland still has right to inherit the second and third…

Well, at least, he doesn’t have to deal with another country. (political?)

Umu, I wonder how long will these two follow me…

Emil and Bell are still fine, but as for these two, it’s hard to do anything with their 【basic feature】…
By the way, Fran and Roland have been in a bad mood for a few days. Back when Mr. Lt. Colonel was in charge and they didn’t have a turn.
I don’t know!

『First of all, we will take an inn, and we will eat fish dishes!』(Kaoru)

After coming near the seaside town, I store the Chariot in my item box and declared so to everyone.

Yeah, after I arrived at this world, I have only eaten fish dishes that are dried or salted.
As a former Japanese, that would be unacceptable.

Well, considering preservation methods and transportation, I know that it’s inevitable for those living in the inland areas.

I have been to a seaside town once.
However, at that time, it was the first new shipbuilding event of the Arigo empire that invited the Balmoa Kingdom as guests.
And that party’s real purpose was to 【Show it to me in order to get praised】

So many engineers who were involved in construction have come.

A lot of people didn’t eat but throwing questions one after another or rather it was a technical examination meeting.

Besides, it’s a seaside town, there is a prejudice that 【Cheap dishes are fish dishes】, 【high-class dishes are meat dishes】

All the dishes back then are meat dishes!

Furthermore, they didn’t even prepare vegetables!
In the seaside town, don’t bring out fish dishes, just bring out meat dishes!!

What’s with that common sense?!

Well, just like in Japan, there is a saying that 【Premium meat must have Sashi (in EN term, it’s Marbled Meat)】

It’s the delicious meat’s lean body but it can be eaten in any town.

But it was a seaside town, why didn’t you prepare fresh fish dishes?!

(T.N: you think Japanese only care for rice? Kaoru cares for Sashimi more)

Well, anyway that’s why I wasted my precious opportunity back then.

But this time it is different!
This time I can freely eat fish dishes!
Grilled fish and boiled fish aren’t too bad, but since we have come all the way to the seaside town, Sashimi is the best choice.

Here is the order.
Today will be a Sashimi feat, tomorrow is grilled fish, the day after tomorrow go with boiled fish!

And when we entered the town, we entered the first store which I saw. That store looks somewhat expensive.
We connected Ed’s group to where they keep horses, entered the store and got a seat.

I didn’t even look at the menu and shouted to the clerk.

The others are just trying to pick up the menu, but I don’t mind such a thing!
Actually, there is a rule that you have to order everything at once!

Alright, it’s my first sashimi feat again after a few years!!
My tension was MAX.

Until I hear the reply from the dumbfounded clerk…

Is the translation function not working well?
… That’s it!

He was pretty disturbed.

The clerk was even more surprised by my explanation, he cried out with a loud voice and everyone’s line of sight within the store concentrated on me.

Eh? There is a tradition of eating sashimi, isn’t it?

No. Indeed. In the cities where I had dropped by, including the Capital, there were only fish dishes like dried or salted.
But I thought it was because of the transportation and preservation’s problem for the inland.

In the seaside town, I thought that there are cuisines such as raw and other methods of eating, such as: 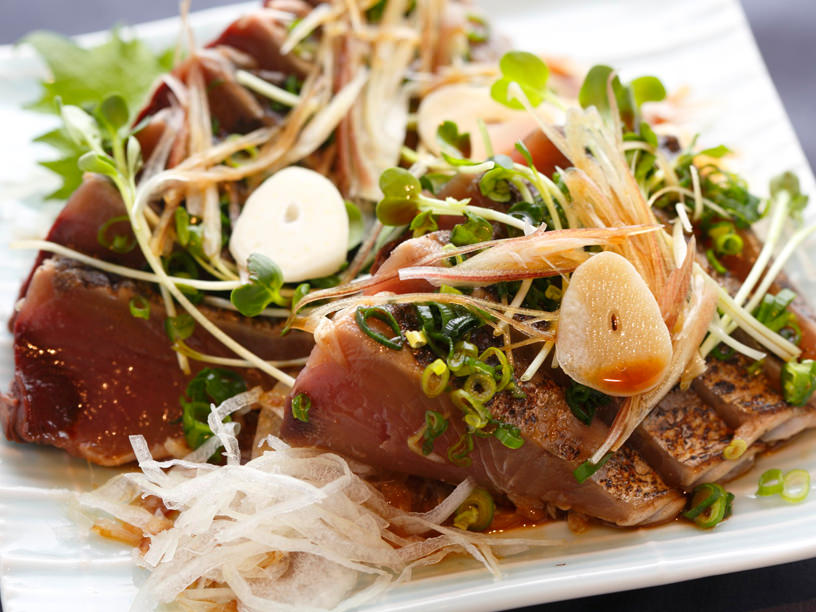 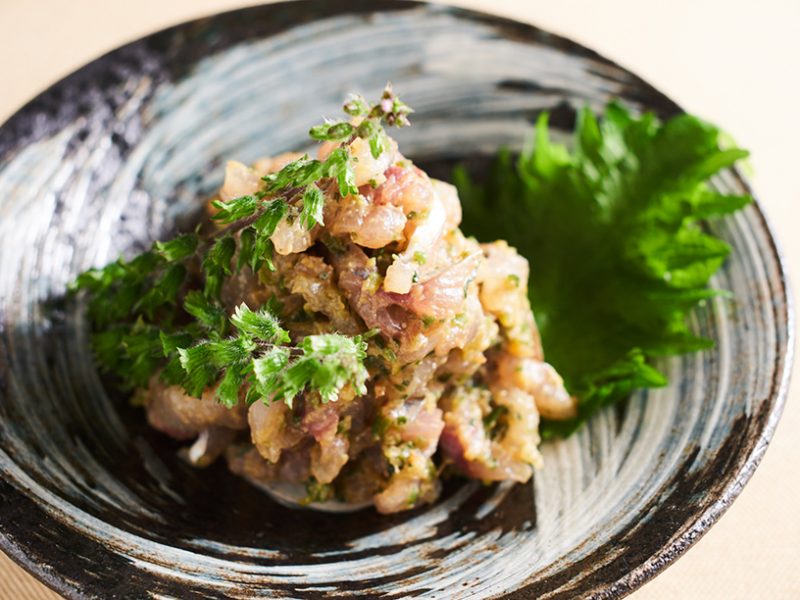 It should be easy to sort the fish, that the fisherman just caught on the boat, took out the internal organs with your fingers, rinse with seawater and eat it anywhere, etc.

Yet, why people in the shop say 【I can not believe it!】
Why are you staring at me with a face like that …?

『Hey, the brother other there, you don’t explain it properly.
If you eat the fish that isn’t cooked through fire,
It is said that you will become sluggish, being stung by insects and falling with abdominal pain.
Well, don’t eat raw fish or anything like that.
I don’t know about the inland area, but you are a girl, I think you’d better cook the fish well.
Or you will need the care of a pharmacist』(Customer)

His voice is a little rough, but one of the customers kindly advises me while laughing.
Is he a fisherman?

The (ossan) old man is surprised, no no… the Old gentleman (Oji-sama)

… My wording became worse since I came to this world, I should be careful.
Also my onii-chan also said:
【You already have bad eyes, if your mouth is also bad as well, no-one will…】
Ah, be quiet! (Urusai wa)

When I lived in Japan, I was told that  【River raw fish are dangerous, but ocean fish are okay】
But it seems that the information was because all the sea fish in Japan are frozen at the stage of distribution and removed the parasitic. At the same time, river fish almost weren’t handled like that.

Besides, since the Sea fish are far away from the human living area, the parasite hasn’t evolved assuming the human being as a host.

In other words, parasites of sea fish entering the human body, most of them cannot survive for a long time in the human body, at most they can only cause temporary severe pain, and it’s unlikely to become a serious symptom that is related to life.

… No, just with the intense pain, it’s disgusting enough!

On the other hand, rivers and swamps are part of the land.
Since they are included in the living sphere of land animals, parasites of river fish are often able to survive in the body of terrestrial animals.
… That means that there is something pretty dangerous.

In other words, there is no parasite in the sea fish.
Even if it’s not frozen, checked and removed parasites at the time of cooking, it’s still safe.
At most, it only causes intense pain in the human body.

I knew about it, but I didn’t mind because I wasn’t afraid of any kind of toxins, bacteria or parasites, as long as I have the potion.

But… even if I do not mind, the cook does.
No matter how much I say 【I don’t care, please give me the raw fish dished】, they won’t prepare it for me.
It’s a credit problem for the shop when a customer gets sick in the shop…

『… Grilled fish and boiled fish, one plate at a time, please…』(Kaoru)

I ordered properly without looking down on the drafts in disappointing.

And then Francette’s group also ordered one after another.
It seems that they chose after looking carefully at the writings.

By the way, Francette doesn’t stop the order.
Yes, because Francette has to support that cheated physical ability, her fuel economy is really bad.

No matter how much she eats, she won’t get fat. Damn it!

And I ate the dish that was brought out… in disappointed?
… It was delicious, Damn it!