Translator’s complain: Mile’s LN was released too fast, it almost caught up with the WN.

Come on. Stop tempting me, I need to give some attention to other series as well.

Even after hearing Mile’s explanation, the hunters were still in doubt.
It’s no wonder.
It’s some kind of magic that they have never heard so far.
Moreover, when they saw even some young girls could use it, they craved for it even more.

Of course, the setting is Maevis can cast that spell in her head and only speaks the name.

『Because Maevis is our party member so I taught her the secret of my family.
I won’t make an exception for anyone else』(Mile)

That being said, as hunters, they must respect other people’s personal secrets.
More than that, when Mile said it was 《Secrets of the house》, no one thinks that Mile’s family is just an average family.

『… Just give up.
Do you think you can pry on other people’s secret and become strong?
…No, You will become strong for sure but…』(GM)

『Idiot (Baka Yaro)
There’s no persuasive power if you say it like that!』(Gorasen)

Gorasen yelled at the honest line of the guild master.

『Just stay silent already.
Well, if anyone wants to try it yourself, line up and cut in order.
There are a lot of bodies to test here』(Gorasen)

『Well, I would like you to accompany one of our carriages to the Royal Capital.
As the escorts and witnesses.
If there were involved parties coming along, it would be easier to explain.
Of course, we will give out big rewards』(GM)

《Evil God’s Utopia》 and 《Flame’s Friendship》 stared at 《Red Oath》 all at once.

Only 《Red Oath》has fought with special monster species and they were also the 《swordsmen with cool magic that can cut the special Ogres》
It’s natural that 《Red Oath》 should accompany the carriage, there’s no better option.

It was an immediate answer.

Wolff asked back the four instant rejections that he didn’t expect.

『Because we are from the capital city.
We don’t want to go back and forth in the middle of the training journey.
If we choose the route to go back, it will be a waste of time』(Rena)

『 Our choice must be an unknown road.
We are a hunter party who is on a training journey after all』(Maevis)

They are veteran hunters, they also had a training trip when they were young. So they can’t deny Rena and Maevis’ statements.
Of course, the guild master also had that training trip.
Therefore, although everyone thinks that 《Red Oath》is the most suitable party, they can’t force them.

Well, even though it’s also that《Red Oath》 doesn’t want to go back to the Royal Capital because it’s a waste of time. The main reason is they want to avoid that Guild Master.

((((Who would want to go back to the place where the GM had our figures and knew our identities!!)))) (Red Oath)

There was no possibility that 《Red Oath》 would receive this request.

As expected, 《Red Oath》 declined to go back to the capital city.
《Evil God Utopia》 and 《Flame’s Friendship》also refused.
They didn’t join in the fight against the special species in the first place and they weren’t shameful enough to take credit for it.
Besides, they would be troubled if the guild asked them questions that they couldn’t answer.

The guild master also didn’t necessarily get the companions.
He has heard the details from Mile, it will be all right if she shows the Capital’s branch guild the actual things.
Apparently, the guild master intended to accompany 《Red Oath》 and to hear various things along the way.

But when《Red Oath》 refused to accompany him, he didn’t really worry if the remaining two parties would decline as well.

At the reception counter on the first floor, everyone received the escort’s request fee and the payments for the Orcs and Ogres that Mile gave out.

Mile asked the receptionist to divide it to each party in three equal parts.
《Evil God Utopia》 and 《Flame’s Friendship》 tried to decline, saying 《We can’t afford to receive so much》 but 《Red Oath》including Pauline insisted them to receive it.
The preys delivered are not only the special species but also the 7 average Ogres they killed on the way.

《Red Oath》then waved their hands lightly to Wolff who said so on behalf of the two parties.

And when everyone tried to say goodbye.

『Ah, I have been wondering about it for a long time. May I ask about it?』(Mile)

Mile asked Wolff about what she wondered about

『Your party’s name, 《Evil God Utopia》, why did you name your party so?』(Mile)

Listening to that, both 《Evil God Utopia》 and 《Flame’s Friendship》 went *acha…*

Then Wolf explained the origin of their party’s name.

『In fact, we planned to save money as hunters, we wanted to use it to make an orphanage …』(Wolff)

《Red Oath》 was dumbfounded by the unexpected explanation from Wolff.
They had never thought that Wolff had such a great purpose. And they couldn’t understand why it would lead to the name 《Evil God》

『So, when we make a party,
The receptionist asked us the meaning of our original name,《Goddess’ Utopia》
It wasn’t necessary to make our party’s name.
It was just some idle talk.
And we answered honestly:
《We want to save money and we will make an orphanage, literally, an Ideal Goddess’ Utopia》…』(Wolff)

As Mile’s group heard that… They though the party name was wrong.

『And when I explained in detail:
《It’s the Orphanage for only Lolies (young girls)
If possible, I would like to take only cute Elf and Kemonomimi Lolies and so on…》
Then, the face of the receptionist distorted.
Before I knew it, our registered party became 《Evil God’s Utopia》…』(Wolff)

This man…
Impression lost…
Die… ee…
This man is a Horny-san!

Wolff somewhat felt uncomfortable with four pairs of cold eyes looking at him like trash, he urged the leader of 《Flame’s Friendship》 to get out of this place.

(Tech Setter: テックセッター) (Mile) (The only thing I found Tekkaman: The Space Knight)

I will place this card face down and end Mile’s turn.

Be very careful because this card is a TRAP. 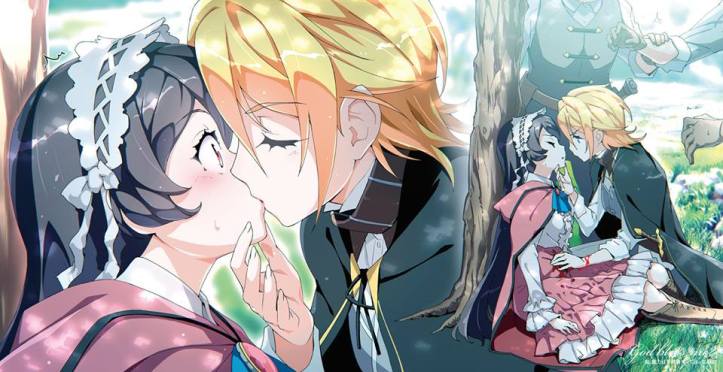 You just activated my YURI Card