But it’s already new month so I rotate to release other series.

Details: 5 Mile Chapters, 1 Taru, 1 Mira, 1 Asley, 1 Cathy (Mile is rather short so I release 5 chapters instead of 1 like other series)

After taking a two-day vacation, 《Red Oath》 went in front of the guild’s request board in order to take the next request.

Rena has a bored face, but it’s natural.
There’s no reason for the guild to always have an interesting request.
The dangerous, annoying and boring jobs with low rewards are the majority of the hunter’s work.
It’s 《 the bottom job which can be taken by hunters with no good ability》

But when everyone is looking more closely at the request board.

As Pauline looked at the amount of reward, not the content of the request, she noticed one request.

『Accompany the investigation of the forest:
Escort of two scholars, transport luggage and collections』(Notice)

The reward is extraordinary. 8 small gold coins per person for the schedule of 3 days and 2 nights.
This reward is equivalent to a small-business team escort request traveling along a route with the high risk of being attacked by bandits.
Then the girls read the request pointed by Pauline carefully.

『C-ranked or higher. The total number of people: 8-10 people.
However, three or more of them must be women』(Rena)

『Idiot, it’s the reverse, the reverse!
As they don’t want the escort to do bad things, they are specifying the women hunters in the team.
In other words, the client is a woman, maybe…』(Rena)

『But because of this, there aren’t many parties that can apply.
Party with 8 or more people is like B-ranked or A-ranked Party.
They wouldn’t stay in a small city like this …』(Mile)

『That’s why I called you an Idiot!
Did you read properly? It’s the total number of hunters.
They must plan to hire 2 Parties in a joint request.
They require a big number of hunters to increase the range of Party that can accept.』(Rena)

Mile usually can be thinking about this kind of thing, but today she seems to be a bit sluggish.

『This means if we receive it, the latter Party will be fine everywhere.
There will be no problem with an all men Party from 4 to 6 people. So most of Party can accept it…』(Pauline)

Just like Pauline says.
If Red Oath doesn’t receive this request, it’s rare to have a Party with 3 or more women. Even Party with 2 women and Party with 1 woman is quite limited.
If the first Party received has 1 woman, the second Party must have at least two women, which makes it quite hard to find a suitable one.

『Let’s see.
There’s no other good request.
I have no intention of receiving a long-term escort request here, but
Three days are rather quick and it isn’t transportation but a survey of the forest.
It’s also fulfilling one of the purposes of our “training trip” to study things in various places.
It’s not bad…』(Rena)

Pauline and Rena seemed to be interested. Maevis and Mile, of course, have no objection.
And right after 《Red Oath》 finished taking the request and left the guild…

It was a fierce competition to take the request which has been stuck on the request board for a long time.
It looks easy, safe, good rewards, and can be received with only men Party.
It’s 3 days 2 nights trip with 4 talented beautiful girl hunters.
Moreover, they have brought good fortune for the 2 Parties 《Evil God’s Utopia》 and 《Flame’s Friendship》

It was a natural outcome …

『We are the one who put the request, Etoul (エートゥルー Etouru) and Shararil (シャラリル Sharariru).
We are the “Academy” ‘s researchers.
This time, we are planning a survey at the place where human beings don’t often visit.
I would like to ask all of you to escort us and transport our equipment, food, and collection, etc.』(Etoul)

Etoul and Shararil are women who looked about 20 years old.
And their two ears are clearly pointed.

*Pan* Mile was hit on the head.

Rena gets angry with Mile again. It’s quite common before the client.

『As for what everyone gathers or discovers during the request,
Other than what we are trying to find for our academic purposes, it will be all yours.
However, because our request included transportation, it’s natural to give priority to the transportation of our goods.
…Well, we will divide the volume share at 8:2
The goods that you can bring back are limited to light, bulky and valuable things like expensive herbs and the like.
Also, if you find something valuable for our research, you will be paid an additional fee.
It’s valuable to us for research, but there’s no big market value so we can’t pay a very high price, but I think it will be a better profit than being sold somewhere else.
Originally, we don’t have to pay for what we request, but well, please consider it as a bonus』(Shararil)

It’s still a good condition.
Usually, in this type of survey request, everything the escorts found will become the property of the employer.
The two elves said to be from the capital city, they bothered to come to the local city for their investigation purposes.
They seem quite generous.
They are probably the researchers who care about research more than money.

Then, another Party introduced themselves after 《Red Oath》

From the elves’ point of view, Mile and Rena’s appearance is around 40-50 years old. Maevis and Pauline are about hundreds of years old, so there’s nothing to worry about.

When Mile called herself the “Magic Swordsman”,
The two elves thought it would a “future black history candidate” for young people, so they looked at Mile with a warm gaze.

The other Party was a typical balanced of five men, three swordsmen, one archer, and one magician.
So the total number of escorts is 9.

Despite that there aren’t many elves living in the human city, this country is different. When 《Red Oath》 heard that the two elves are living in the capital city of this country, it’s natural for them to recall the name of a certain elf that came to their mind. 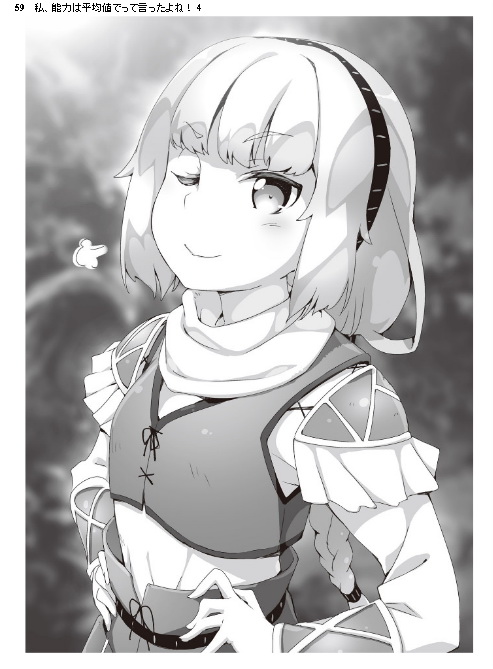 『You are the elves and researchers then are you the same as Dr. Kulereia…?』(Maevis)

Suddenly two elves raised their voice.
As expected, they are acquaintance… in the wrong direction.

『 That woman, she is just an amateur.
She has lived in the woods for decades so of course, she understood well our common knowledge.
But it was foreign knowledge for humans, she used it to work for the aristocrats and large merchants to have them provide the funds.
We aim to be a lecturer and associate professor so we steady continue researching.
She ignored that route. She had money and our common knowledge but she was ignorant about research.
She got in by calling people with “Oji-sama (Dear uncle/grandpa)”,
Damn it~tttttttttt!』(Shararil)

It didn’t mean she stole their workplace because it was from another country,
But apparently, they couldn’t forgive her.
And…

『In addition, she already reached her age, but she still clung to her father without embarrassment!
We also wanted to act sweeter to our father (Otou-sama) as well.
But our bodies and ages are too much, so we must endure it!
However, the elves accepted it.
No, rather they all admired “Such a cute and nice daughter that’s loving her father forever”
What’s with that?
Are you kidding me~eeeeeeeeeeeeeeee?』(Shararil)

…We stepped on the land mine.
That was the kind of thing that 《Red Oath》 understood well.

Did you read the chapter, Shironeko? Or you just “first”?

In case you skip reading to comment first, I have a sticker for you for explanation