I have mixed feeling about translating chapter like this. I really love it but…

First, the game details. I love to read it but translating is really hard. The name for skill, item, equipment, the explanations… I must choose the words carefully.

Second, the verse/poem to describe the beauty of humans or thing. I’m not a writer to use good words to convey meaning. (I might understand the Japanese words but write it in English is hard)

(T.N: Anon used “Watakushi” an extremely polite version of “Watashi” in the service industry. It’s a gender-neutral word which both men and women can use to refer themselves)

The one who greeted me and Mina, she dressed in colorful kimono and she used the old speaking. (T.N: Mira also used a different kind of old speaking)

She wore a black cap, her jet-black long braided hair hung behind. She looks like a Heian nobility.
Her Kimono has many layers just like the twelve layers type. She looked at us with a cool smile.

『Hara~ Hara~. Such cute customers. Because it was an introduction from that Okama.
I wondered what kind of strong characters would come,
To think it was such a cute Little Angel (Tenshi-chan) and a Little Priestess (Shinkan-chan)』(Anon)

Anon-san hid her mouth with her long sleeves and laughed.

I hold down my shame and do a Round Dance while changing the clothes in my inventory instantly with a single tap.
It’s a second try but it’s rather embarrassing to wear a lady-like dress even though it’s not exposed.

Anon-san looked at me in dress and gave a sigh of exclamation.
Her gesture is strangely smooth.
From the appearance of her character, Anon-san appears to be of the same age as me. But for some season, whether it’s her little gesture or tone, she looks like an adult.

Anon-san looked at my dress with a serious look.

Hiding her mouth with the sleeves, her eyes draw a half-moon.

Because of my promise with Misora, I can’t answer.
However, I want this person to make Mina a dress so I can’t ruin her mood.
When I was thinking of how to answer, Anon-san laughed and asked questions.

I wonder if this is the so-called “Anticlimactic”

I was half astonished and half delighted to know she accepted it.
In retrospect, the blonde priestess Mina also smiled happily.
After all, she is a girl.
She must have the desire to go to a ball in a beautiful dress.

I raise my right hand to Mina. For a high five of joy.
Mina slowly and gently put her forefinger up in response to my actions.
She didn’t do the high five.
The feeling of touching my palm is rather tickling instead.

『No, no. Rather than saying thank to me, shouldn’t you say thank to Unknown-san?』(Taru)

Anon-san lightly laughed and said so.

『I have accepted Taru-shi’s request, but there is one condition. However, I wonder whether this condition can be applied to young children.』(Anon)

(T.N: I remember wearing weak armor that has a beautiful-costume-appearance over last game ultimate armor. Fight boss is so hard but so satisfying. Thank god that later game costume is separated from armor)

Mumu…
Anon-san’s professional skill is sewing, so she should be good at creating robe-type armor used by magicians.
She said she prefers to dye armor in color over strengthening it?
There’s no way I can do that…

『 Don’t drown yourself in such a terrible color. Love color should be more fascinating』(Anon)

Certainly, the kimono worn by Anon-san is also colorful in red, purple, yellow, and white.
Her passion for color is transmitted.

『My condition is: accompanying me in materials collecting to create the color』(Anon)

In other words, collect materials together.
We just need to fulfill it.

For some reason, Anon-san smiles ambiguously with both hands posing like a ghost.

I’m not sure about that. But it looks like an exciting adventure is waiting for me.
This is a very attractive proposal for the alchemist. What are the materials used to make the color, and where can we collect them?

『I will go! I will follow you to the end of the earth!』(Taru)

I declare so to Anon-san with a huge smile.
It was interesting that Anon-san was a little taken aback.

And then, we went west on the Beginning Prairie
It’s a vast wasteland. The earth has a red tea color, illuminated by the sunset, which further increases the wilderness feeling.
I, Mina, and Anon-san are watching the sun setting over the horizon.

Even she said to go collecting materials, this place seems to be a field where monsters appear, so we went fully armed here.
Anon-san has also renewed her equipment. She wore a dark red lacquered armor with a wide-open shoulder on top of the kimono.
Her main weapon is a naginata,

together with her glamorous black hair peeking out from the hat waving in the evening wind is reminiscent of a Samurai Princess. 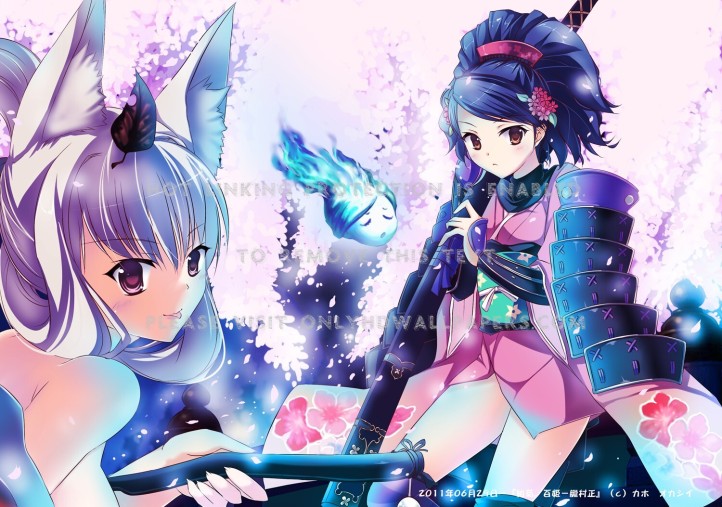 The screen of the night is spreading and covers the wilderness.
In the evening, the time when the boundary between this world and the imaginary world occurred, we can hear the voice of the ancient people.
A place where a large number of souls crawls, aiming for the moment when the boundary becomes ambiguous, seeking its own ground, and appearing to take away the soul of the living.

In the wilderness where there was nothing before.
A myriad of tombstones appeared with the darkness.
Like a phantom… gently…
Creepy…
Spread the smell of death.

Mina squeezed my sleeve from the back.

I reach out to her to reassure her.
Shallow Dreaming Graveyard
A special field that only appears at night.
Commonly known as a cemetery that exists only for a short time when you have a shallow dream.

From what Anon-san says,
When dyeing equipment, things like pallets emerge, it seems that selectable colors are displayed from there.
I don’t know in detail, but sewing skills seem to have secondary abilities derived from coloring skills, and the types of colors that can be recognized by levels and abilities seem to increase.

This time, the Dress that she will make for Mina seems to be the latest design from Anon-san. It seems that she discovered the name of an unfamiliar color when she created the recipe.
That is “Skeleton Dark Gray”

By the way, for Anon-san, a silver-haired in a Western dress and the Blonde-haired in a Hakama clothes are a “Mismatch tag”

『From the name of the color, there’s no doubt that the skeleton is involved. In other words, you can collect it here where the skeleton monster appears』(Anon)

Actually, we don’t have to stick to that color,
In the end, Anon-san might just want to use that new color.

As the tombstones emerge one after another, I can make a prediction what the skeleton is.
I guess it’s a skeleton monster.

The Samurai Princess smiled bewitchingly and stepped into a cemetery where white bones rolled.
I followed Anon-san while looking at a standing sign written in a strangely cute character, Beware of the ghosts

Anon-san’s level is high.
Mina is also good with Lv8.
I feel like I’m out of place, but the skeleton we are looking for is rather weak.

Mina slams the mace with a cute voice.
The sound of crackling bones is strangely real.

『Fufufu.
Skeletons are vulnerable to blunt weapons.
Mina’s mace is a great help』(Anon)

At the cemetery in the darkness, I thought that the appearance of a blond loli priestess who sprinkled Mace and kicked the slow-moving white-bone monsters was reassuring.

As it is, Anon-san seems to want the Skeleton-san’s group to R.I.P
She cut them cross and prayed.

『 As expected, it’s not easy…』(Anon)

By the way, the skeleton only drops the mysterious material, White Bone.
I’m happy because it’s an unknown drop item, but Anon-san is depressed, she seems to be tired of seeing this material over and over.

I ask the leader, Anon-san to stop. And I activate the ability Appraisal Eye to analyze White Bone
There might be some hidden hints for Skeleton Dark Gray.

White bone
[Bones of the humans who were used as slaves by Titans (Kyojin) in the old days. It is said that when ground into bone meal, it becomes the source of nutrients. Its versatility is wide, but the effect isn’t so great. In addition, it has been witnessed that Old historical witch used it in witchcraft, etc.
However, All of them are just tools to create an atmosphere]

There aren’t any useful reference.

It becomes a nutrient for a meal and it’s a prop for the witchcraft. The material value isn’t so high because it’s less effective.

I shook my head to Mina’s question.

『No, but I knew it would be a nutritional ingredient, and the skeletons here were Titans’ slaves.』(Taru)

I was a little excited about the word Titan (Kyojin).

Anon-san said as if to be convinced of something.

I confirmed that there is no enemy in the surroundings, and I suggested that I want to investigate this material a little more.

『 Don’t worry, these enemies around here can be handled by me alone』(Anon)

With the approval of Anon-san, I took out the alchemy skill I just mastered, the alchemy kit Lunch Box (Bento) used in Training Technique.

Actually, it is possible to easily check the resistance of the material.
I try putting white bones in the square Lunch Box.

Characters appear on the lid.

As expected, I could analyze the weakness with Appraisal Eye
I’m curious that the attribute is labeled as Curse 1 but I leave it alone for the time being. I open the lid of the kit that comes with the Lunch Box.

(T.N: The raw doesn’t explain this time but it seems Taru used Soft method, not Hard method, so it’s Fork/Spoon/Knife instead of Rapier/Hammer/Sword)

Stab White bone with a fork.

Tap White bone with a spoon.

Cut White bone with a knife.

After that, I reviewed the White bone with my Appraisal Eye, but the explanation didn’t change.

『Fu~mu~n… I tried to reinforce the material simply, but there seems to be no particular change』(Taru)

Anon-san looked at me with unbelievable eyes.
Her expression was full of surprises.

While I was analyzing, it seems that two skeletons have gathered together, but Anon-san and Mina crush them quickly.
Because Mina is doing fine here, this graveyard isn’t as scary as I thought.
The moon rises in the night sky, and the lights of the stars shine on us.

『Taru-shi, may I ask you to elaborate on the story of strengthening the material a while ago?』(Anon)

The Samurai Princess slaughtered her enemies without any difficulty and asked me so.