Mile Chapter 347: What Lies in the Mountain 3

Mile Chapter 347: What Lies in the Mountain 3

『Ah! Isn’t that “The place where the villagers throw away used clothes and bread from failed products”…』(Rena)

After Mile announced their arrival, Rena pointed out to part of the rock which was flat and looked like a table.
It’s a place where nobody comes to and there are no mountain roads or even animal trails.
The trace of the villagers coming here…
Apparently, thanks to the broken plants and the traces of disturbing tree branches that look like hatchets, they seemed to be able to find such a place.

『Anyway, we have to get information from one of the three powers, but who should we get it from? The golems, the suspicious men, or the wanderers?』(Mile)

『I don’t want to hear the suspicious guys first.
I don’t know if they will come here again …』(Maevis)

Rena, Maevis, and Pauline give the appropriate replies to Mile.

Mile’s finger flute resounded.
It was a special skill from Kurihara Misato after a lot of practicing, asking an American uncle who lived nearby for special training…
But it’s not that big.

Bend your thumb and index finger into your mouth,
It’s an easy job just to breathe out but it was quite difficult to learn how to make a sound.
For some reason, most Americans have learned of this,
Most Japanese cannot blow finger whistle.

(T.N: I just translate. Please don’t yell at me when in truth not all Americans can blow finger whistle)

However, unlike a whistle, a finger whistle that can make a loud sound is useful in an emergency.
Or even as a signal in such a case.

Yes, this is the place where “The village came here to threw away used clothes and food”
This is the signal saying “I’m here to throw things away”, That’s how the girls heard from the mayor.

After a while, four children came out of the trees.

When he came, thinking that the usual villagers have come, there were some unidentified armed girls.
It would be natural to be wary.

However, although those girls were armed, they are girls between the age of the minor and about 17-18 years old, so the children don’t really have to be alert that much.
If it was someone planning to kidnap children for illegal slavery, it was usually a strong muscle man (to carry?). And there’s no other way to make money from children.

『We are Hunter.
We received a request from the mayor.
… Do you have any problems?』(Mile)

From here, the impression of appearance is the most important thing to talk things out,
This is where Mile comes in.

… Pauline seems kind, but what if the children are aware of her “blackness” with the child-specific instinct. In that case, the children will lose all trust at once.
And everyone knows that Mile is the best to ask questions about things they don’t know.

A leader-like 12-13-year-old boy talking on behalf of the children.
Apparently, they seemed to understand that Mile’s group would not try to harm them, even if they were not sure.

『Uncle?
Ah, is it “the person who throws away old clothes and bread that is no longer needed in the village”?』(Mile)

The boy leans his head and says so.
Apparently, is this supposed to be a village waste dump…?
And that “uncle” is the one in charge of “come to throw away” here?
Of course, he couldn’t say “such a thing” in front of the children.

『Right now, he doesn’t know the danger here.
It seems that villagers are not allowed to come around here, so for safety, he instead…』(Mile)

Four children remained silent.
There was no way that many people spontaneous for wanderers in such a mountain.
Wanderers who lived in some town,
Nobody helps them, on the contrary, they were persecuted, exploited, hunted for play and despise, at risk of being caught and sold as illegal slaves, and fled to seek a place of rest and wandered. Here is that place.

There is no leftover food and no one to pick their pocket but…
Sometimes they can use wild plants and small animals, or rarely use traps to kill big things,
Mountain living, where they can live a much more satisfying diet than when they lived in town.
They can use spring water for all they want.

It is natural.
If it were so easy, all the city wanderers would have emigrated to the mountains.
Normally, only a few people go hunting, living in the mountains is the same as suicide even if it’s the adults.

Beasts, animals,… and monsters.
If you’re in the mountains, you will be the prey for those who want to enjoy “human hunting”

Therefore, it is impossible for children to live in the mountains.
Why is it possible here?
It’s the Golems.

For the rock golem that appears around here,
Vicious monsters such as Ogre and Orc are eliminated,
There are only relatively low-risk lizards and rabbits,
There are some snake-based monsters,
If the children always armed with bamboo spears and clubs, several people act together,
And if they polish their climbing skills in case of emergency,
It seems to be manageable.

Why do the golems drive away Orc and Ogre, but not other herbivore monsters or animals?
And why are children getting overlooked without being driven away?
According to the village chief, the reason is unknown.

However, children can live freely here.
That was all.
And the children just came from other places,
It has nothing to do with the village around here,
For some reason, villagers bring clothes and food under the guise of throwing away unnecessary items.

The wanderer children have never got that before.
Even in cities where people who are way wealthier than the villagers around here.
They never bothered to hire the children let alone something like spending money for the children.

They don’t understand at all what the villagers think about spending their money on something like this.
So the four children just kept silence.

But staying like this isn’t an option.
So Mile proceeded.

The child leader stares at Mile with a sulky face and does not try to reply.
And Mile came up with the reason.

(Ah, it would be very disadvantageous if the enemy knows their number.
In other words, they didn’t trust me yet …) (Mile)

Yes, even if the villagers really hired these, with all the treatments the children had received in their life, they couldn’t trust people so easily.
And those who believe in people so easily would have long been dead or sold as illegal slaves.

A large piece of meat placed on the rock table.

Vegetables, bread, a large pot, a simple furnace, a water barrel with a spout.
Suddenly the children see those things that emerged from the empty air and petrified.

『If I don’t know the number of people, I don’t know how many dishes to cook.
Is it enough for 4 people?』(Mile)

A boy about 10 years old cried that way right after Mile’s question even before the leader boy could stop him.

From Wednesday, January 9th, Koransha’s K Ranobe Books, my work, “I will survive on another world using potion!”
And “saving 80,000 gold coins in another world for retirement”
The comics are the third volume and the four volumes are published simultaneously! (^^) /

Thank you for the second FUNA festival.
In particular, if you buy it by Sunday, it will be counted in Oricon’s sales volume, so there is a possibility that it will be on the ranking of your favorite Oricon! (^^) /

And, I will take a holiday for the year-end and New Year holidays to rest the overworked body that is being chased by the deadline every day.
Next week and next week, two weeks off.
The serialization will resume from January 7 (Monday).
Thank you

… Well, in the meantime, I’ll do a lot of things like making a book, hospitals, dentists, addressing the envelopes of dedicated books, and entering tax data. 〇 | ￣ | _ 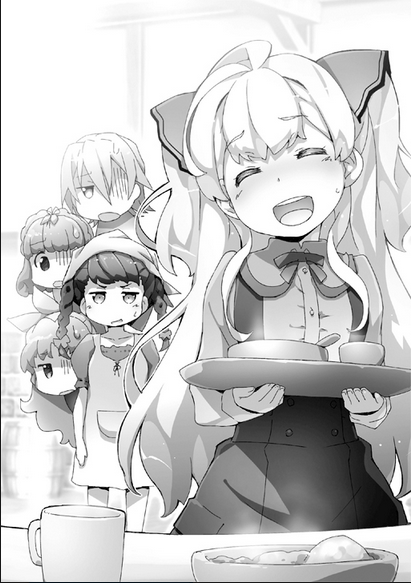