Mile Chapter 354: What was created, what should be protected 1

Answer will be at the end of this chapter because Nano-chan will reveal the information.

Mile Chapter 354: What was created, what should be protected 1

Rena’s group came into the room after Mile, they were amazed by the sight.

The explanation of the nanomachine is transmitted by vibrating Mile’s eardrum.

【This being is explaining the following to you, Mile-sama:
You are descended from the race of people who created them (the machines).
You are probably the only living being in the world, descended from the makers, that can comprehend (have an understanding) of their technological civilization.】(Nano)

【Everything is true, no lies, no exaggeration, no sophistication or fraudulent language】(Nano)

There’s no doubt that all humans in this world are descendants of those who had built prehistoric civilizations.
And she herself understands the meaning (implications) of the existence of the system here, and the tear in spacetime that occurred back then, and the nature of the monsters that would have invaded thus, and that she wants to protect all the people from them. All of that was spot on.
And Mile couldn’t seem to understand exactly what they were.

(But how did they believe it honestly?) (Mile)

If there is no evidence and suddenly said, would a computer whose cold calculation results believe such a thing?
It’s no wonder that Mile is so worried.
However……

【We have provided Mile-sama’s genome information to him.
He has already performed his own genomic analysis and has completed data collation.
And because of our presence and our support for Mile-sama, he has no doubt about Mile-sama’s information.】(Nano)

(Oh, so that’s why…
EH!? Genome information can be analyzed so easily!)

With the earth’s scientific power, it was a technical level that was far from possible.

The scavenger that has been guided so far is stationary at the wall.

And Mile just normally talks with nanomachines,
To Rena’s trio, Mile just appears to be standing silently.
So the girls had no choice but to rely on Mile.

However, even for Mile, there is no choice but to proceed with the talk via nanomachines. 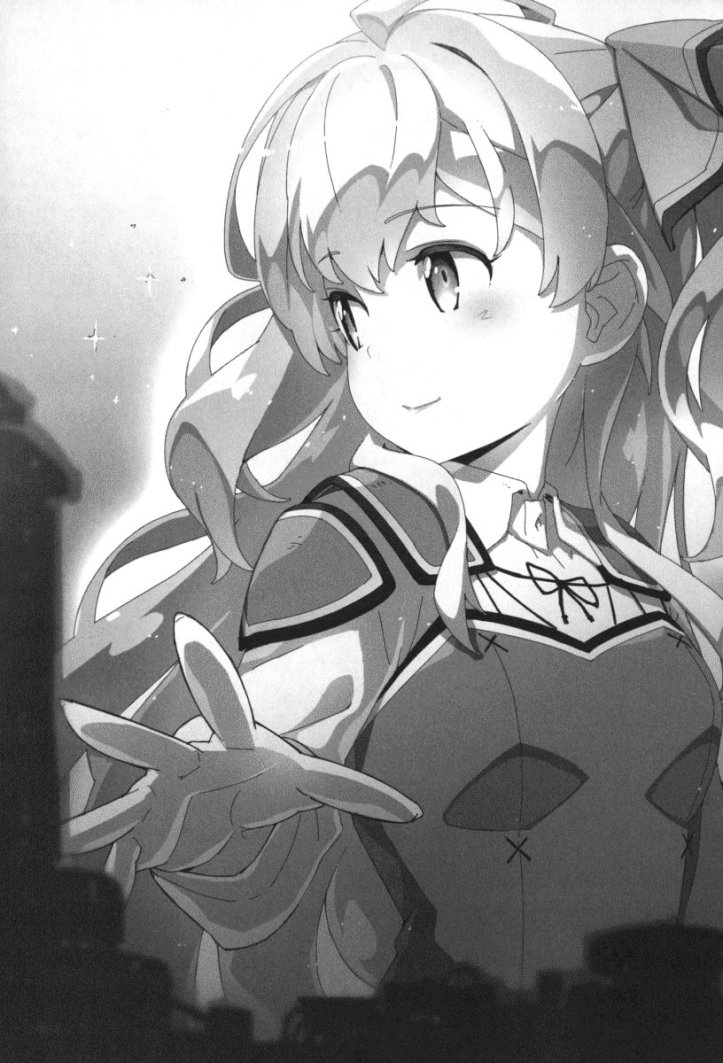 「I’ll try to communicate with this golem’s boss, so don’t talk to me for a while …」(Mile)

It was a complete “Nonsense that was said”, but Rena had no choice but to take it seriously.
And now, Mile had no interference from the Rena’s Trio, she focused on talking with the nanomachine.

(…Then, as expected, this is the ruins of ancient civilization, is the golem part of the defense system?
This resource-saving, autonomous, simple defense mechanism…) (Mile)

【Basically, the main system stopped functioning some time ago, and the same for all the associated subsystems and backup systems. Now all that remains functional is this backup for the backup system that manages some discrete operations (procedures, aka subroutines), and just a few tasks are barely functional. And at best it can only continue operating for a few hundred years…】(Nano)

Mile thinks that it is much longer than her lifespan because Mile is thinking as human time.
For nanomachines that have lived eternal time, and for this terminal device, the remaining time will be negligible.

Mile could not talk directly to this terminal device, so she decided to have the nanomachines listen to the information for the time being, and simply summarize it and tell her.
And …

And according to the date…

Remaining on this world without abandonment… seven wise men.

Despite considerable redundancy, things had limits.

And everything is gone, and now one end system is coming to an end again …

【There are many missing parts in memory.
And in the first place, this system is not an information center.
A simple resource-saving type autonomous, simple defense mechanism management system auxiliary device,
It’s just a third backup system …
Even so, probably, just before the higher-level system stopped functioning, it sent information that is deemed necessary.
I don’t think what Mile-sama asked is the information needed for the mission of this device …】(Nano)

Indeed, it is.
The security guards don’t need to know the company’s business policies or confidential information.

【Still, this device still barely retains some features,
Resource-saving autonomous simple defense mechanism,
In other words, it’s possible to manage the “golem” where Mile-sama has said,
Unless people intend to harm directly here, the golems don’t attack humans,
He could also give instructions to get rid of monsters of great danger.
And after this device has stopped functioning, like other golem habitats,
The remaining golems and scavengers will continue simple actions from the last instruction.
Depletion of restoration equipment and materials, humans and monsters,
Attack by other creatures, natural disasters and crustal deformation, etc.
Until the day when all its functions are lost due to destruction for some reason …】(Nano)

Is it a tragedy to reach that day?

Or is it…
For these machines who have lost their Lord,
…or waiting to respond to that day.

(… repairing?
If you have a golem or a scavenger that can repair yourself, why not repair your device?
The upper system that stopped functioning …) (Mile)

【Authority seems to be severely restricted.
The range in which autonomous machines can act, the conditions in which they can interact with intelligent life forms, and even within this facility,
It’s not possible to do anything beyond the authority given without permission unless they got instructed by the host system or administrator …】(Nano)

(Ah, that’s why…
It would be a big deal if a machine intelligence body superior to human beings started to act freely with their own judgment.
So, I suppose that the authority should be greatly restricted and when necessary, the superior should give instructions.
… But, if the “people above” and all the upper systems are gone ……) (Mile)

【Yes. He can’t use materials from departments other than my own.
Limited resources are available within the allowed range of action,
Repair parts are gradually exhausted,
It’s this terminal that remained to the end by cannibalizing maintenance and using poor replacement parts】(Nano)

It can’t be helped.

Things with shape always break.
Everything is impeccable.
The same goes for human life.

Machine intelligence that seems to have eternal life,
According to the flow of eternity, it’s just a momentary spark.

(Fifty years of human beings, if you dwell in heaven, it will be like a dream …) (Mile)

Unintentionally, Mile muttered in her heart.

“Fifty years of human beings” here does not mean that humans have only 50 years of life.

In other words, even in the human world for 50 years,
In Shinten, on heaven, it’s only a day and a night.
It means what ephemeral can be.

There’s nothing Mile can do.

The wanderers will have grown up and got their own family by the end of the device.

After that, you can simply withdraw.
It’s just that.

With that in mind, when Mile gently lifted her fingers off the device …

【This device seems to have a request for Mile-sama】(Nano)

Mile suddenly shouted at the words of the nanomachine because she was so surprised.

【Yes, he wants Mile, the descendant of his maker to take over the authority of “administrator” and ask for instructions …】(Nano)

Answer: Shurima (this world’s machine), your emperor (administrator) has returned

So, if you’re reading on a mobile phone and can’t move on to other means, it might be a goodbye until the book comes out …

I’m sorry.
Thank you for what you have done.
If possible, I’d be happy if you read it by other means …

And for those who will be parting for a while,
If possible, could you read it on someone’s smartphone up to 355 chapters for the update at midnight on Friday this week?