Marcella and Monica replied to Oriana as such.

Oriana is usually warm and kind but when needed, she can emit a deadly flame bullet from her mouth with a warm expression.
…And the opponent dies.
Social, mental, and much more.

Marcella’s Trio descended from the second floor where the guild master’s office was located, and five people of “Mana’s Drop” rushed to ask with worried faces.
Other hunters are listening to the consequences.

「No problem.
Because we are aware that we don’t have much experience and hunting requests are severe without a vanguard,
So, we asked your party, who has a lot of good vanguards, for a joint order.
Everyone is an amateur at first.
If we don’t do anything when we are an amateur, don’t we stay amateur for a long time?
After explaining so, the Guild Master was convinced」(Marcella)

Although that reply was fixed a little,
Well, for Guild master, there’s no loss because that fix changed to the direction that the Guild Master can keep his face.

“Mana’s Drop” accepts Marcella’s explanation.
The other hunters seemed to be convinced, of course.

That Guild master wouldn’t be easily convinced by that little girl’s explanation,
And because he doesn’t want children to die from taking request at his branch,
But even if he doesn’t allow the girls to take dangerous requests here, they will try to do that in the next city.

No, the Guild master by no means is a bad person.
He just doesn’t want to be involved in the death of some children, doesn’t want the trouble at his branch.

「Anyway, that’s why there’s no problem.
May I ask you for the joint request that we just agree?」(Marcella)

Thus, the Orc hunting…
In fact, the profits of meat delivery are greater than the hunting reward
…A joint order was decided.

While trying to drink water, a light warrior, one of the “Mana’s Drop” members carelessly dropped his water bottle.

「Ah, please lend it to me for a moment.
“Pure water”, here you are」(Monica)

「Can you show me for a moment?
“Soft tissue repair, heal”.
I think this should be fine, but if you feel uncomfortable, please tell me, because I will put on healing magic again.
If you tried to ignore the pain and overdo it, then it will only worsen, so you don’t have to bear the pain…」(Marcella)

「It’s nothing, we are colleagues at the same joint request party after」(Marcella)

Marcela smiles at the young archer who says thanks

Everyone stopped there, not just the young swordsman restrained by Oriana.

And Oriana came out in front of the swordsman, squatted down, and gently pulled out one plant.

「It’s a rather rare medicinal herb.
This isn’t something we can easily find even if you are searching for it,
However, if we don’t look for consciously, we will surely miss it,
It’s a medicinal herb that is difficult to distinguish from weeds.
With this one share, we can cover the food expenses for everyone in this joint party」(Oriana)

Even if “Wonder Three” doesn’t drink alcohol, that’s still a lot of money for an average new C rank party.
And if Oriana doesn’t call out, it must have been crushed by the swordsman.

「It’s about time we have lunch」(Mana’s Drop)

These simple proposals are accepted by a simple agreement between the leaders, without having to confirm the intentions of all of them.
… In these proposals, it’s just a confirmation.

While Monica is making the furnace, Oriana collects the falling tree branches …

Then, Marcella dried the tree branch, plunged into the furnace…

Meanwhile, Monica took something out of her bag and spread it.

Yes, it was folded paper.

When the paper is spread, it looks like a shallow bowl,
Monica set it on a wire mesh made so that the paper container fits snugly, poured a little water, and gently put it on the furnace.

Despite the heavy warrior’s cries, the paper vessel was roasted by a direct fire but there was no sign that it would begin to burn at all.

「… Why doesn’t it burn …
Is it magic?
Is protection magic applied?」(Mana’s Drop)

「I have never heard of such magic!
And do you say that she keeps magic all the time during cooking?」(Mana’s Drop) 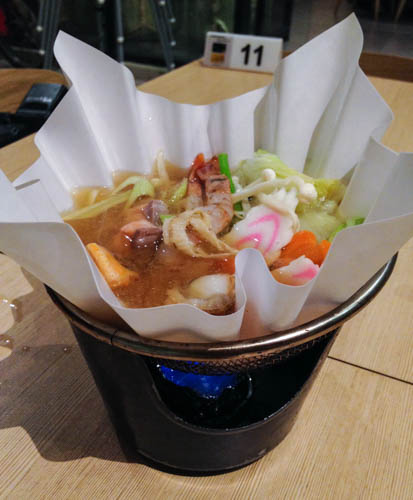 Yes, it could never have been.

「Eh?
But it’s just an average paper, you know?
Although it was slightly water resistance…
If we do this, it will not burn.
I learned the method used in my friend’s hometown.
It’s handy because we don’t have to carry a heavy, bulky pot」(Oriana)

In fact, it’s the way Adel saw at a Japanese restaurant that she went to with her family in her previous life,
Oriana, of course, learned it from Adel.

Five people of “Mana’s Drop” screaming so in their heart,
Of course, not all magicians, and not all girls, are all this great and useful.

Then again, after the meal, everyone is looking for the Orc.

After a short time…….

Marcella reported to everyone in a whisper.

The secret taught by Adel was the secret of only three people.
What they learned directly and what they developed on their own based on it.

Except for a few joint orders for training when they were just newbie hunters,
Until now, they only went with a group of three people in the forest, so Marcella was careless.

(I can’t laugh at Adel-san anymore…
No, I’m different from Adel-san, Adel-san is the only!
Properly and naturally explanation…) (Marcella)

And Marcella replied with a smile.