Guess who is back? Well, I don’t know where is this Extra ARC though.

Now that she has spotted Mile, she can slowly and easily contact Mile at a later date without forcing.
With that in mind, Dr. Kulerea withdrew.
And Rena overflows with unpleasant.

「I’m envious of your popularity, Mile!」(Maevis)

「No no, I’m no match for the girl magnet, Maevis-sama at all!
Should I ask for the guild’s express to give your contact information to that “Princess”」(Mile)

In response to Mile’s counterattack, Maevis lowers her head with a pale face.
Yes, Maevis was also one of those who were fully aware of the annoyance of “Popular in a form that they did not want.”

「No way, I didn’t expect Maevis-san who would have known well enough the annoyance of being popular to say such a thing!」(Mile)

Maevis apologizes desperately to Mile, who seems seriously offended.
Well, even if you say “seriously”, it’s still level 1, so there’s no need to worry too much.
Everyone starts to worry if it’s at level 2, that is when Mile’s facial expression disappears and goes blank.

And level 3 is smiling with her eyes not laughing at all,
Level 4 is when the smile disappears and the expression of an unpleasant face and anger appears.
If she has come this far, you are done for. 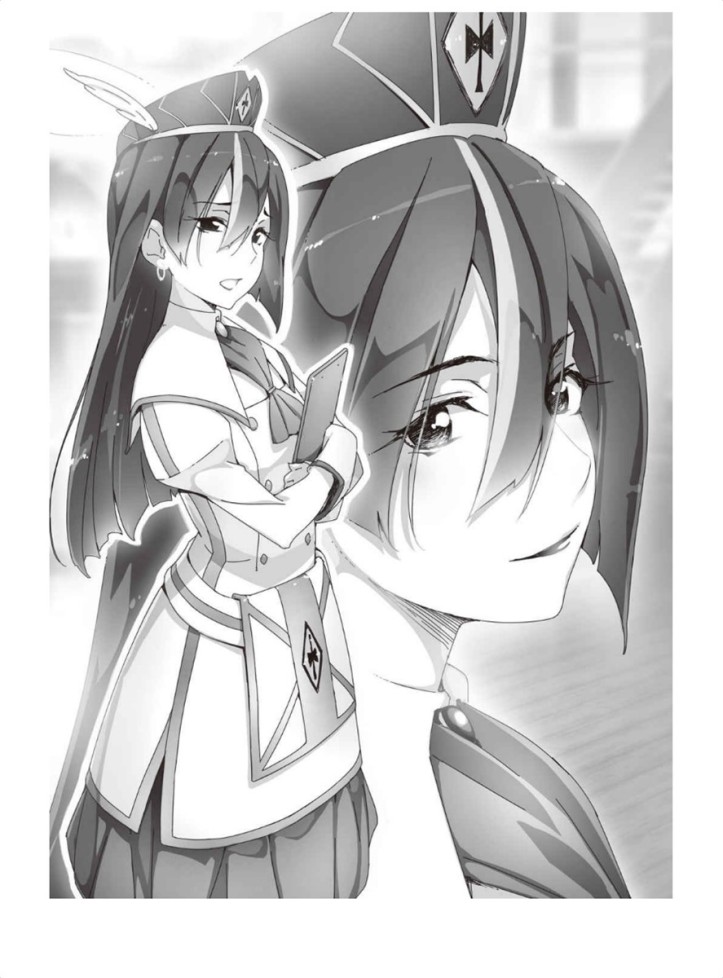 Then, “Red oath” spent a week of vacation and returned to life as hunters, looking for a request at the bulletin board at the guild branch …

「We are on the journey of the training, we are “Goddess’ servant”.
I will be in your care for a while!」(Telyucia)

Yeah, Red Oath pushed the daughter of the Aura Baron, Litoria…
No… recommended to the female hunter party “Goddess’ Servant.”

「No, this is our home.
This is our party registration branch. Both I and Pauline’s parent’s home are in this country.
We just ended our training trip the other day」(Maevis)

Party leader Maevis replied, in behalf of everyone, to the greeting of the Goddess’ Servant ‘s leader, Telyucia.

「Ara… was that so?
Certainly, there are more chances to meet if one stays in one place than both are moving around.」(Telyucia)

Mile doesn’t know what the actual result will be when performing mathematical probability calculations. But she seems to be convinced by Telyucia’s words, which seems to be just right in terms of atmosphere.

「…But isn’t it a little early for the journey of training?」(Mile)

Goddess’ Servant should have been promoted to rank C recently, and above all, Litoria, a completely newcomer.
So going on a training trip right away is a bit too hasty.
When Mile asked, Litoria replied…

For some reason, Litoria apologized to her party buddies.

Because Mile didn’t understand what Litoria’s apology meant, and Telyucia explained with a bitter smile to her.

「Oh, actually, Litoria’s father, Baron Aura, is worried …
It’s a lot of trouble, like putting a lookout on our house or sending a no-dangerous nomination request with low difficulty…」(Telyucia)

Mile’s group convincing voice.
It seems like something he might do… Or rather, he actually did it.

「So I decided to go on a training trip early because it was so bleak.
Even though it’s a training trip, it’s not a special training trip to improve individual strength, but rather to train everyone’s teamwork combinations, so we will not overdo it.
A journey to practice against a variety of monsters that aren’t very strong.
If we stay in one place, we can’t fight too many types of opponents.
And we aren’t going to travel that long.
After staying in this country for a while, we are going to flip and go home …」(Telyucia)

(… Is it like a training camp for new employee training?) (Mile)

It’s as Mile thinks, it’s a combination of fellowship, early education for newcomers, and getting Litoria accustomed to the party as soon as possible.
In that city, Litoria would be asked to go back to her parents’ home from to time and won’t be able to settle down.

「I’m sorry everyone, because of me …」(Litoria)

「With Litoria protects Raselina while casting attack magic from behind, Raselina can concentrate on her support magic without worry.
Tasia now has more freedom to act without worrying about protecting Raselina or the surprise attack of monsters from behind.
Our tactics are now more flexible.
This’s a big thing for our party」(Telyucia)

Tasia was full of work before, having to play a variety of roles, including a ranged attack with her bow, using a dagger to prevent surprise attacks from behind and from the side while protecting the magician Raselina.
The merit of being able to move freely is great.

And if you add the merit that Raselina can concentrate on her support magic, the merit of using magic attacks and hitting weapons, it’s immeasurable how much the fighting ability of the party “Goddess’ Servant” has increased.

What’s more, even though it’s a hit weapon, Litoria uses crushed giant bar rather than the sticks used by Rena and Pauline.
Whether the opponent has a hard outer skin that can’t be cut but the knife, or an opponent who is resistant to magical attacks, nothing can stop the power of crushing, crushing, and blowing off with strong striking power.
Probably, Telyucia wouldn’t have expected that this alone would improve their strength.

「So thank you very much for introducing Litoria」(Telyucia)

Telyucia, who seems to think so from the bottom of his heart, said to “Red Oath”
Litoria smiles cutely *e~he~he* with her head pounded lightly by Tasia.
Apparently, Litoria is already completely familiar with the party, and no longer seems to be attached to Red Oath.
If Litoria were in “Red Oath”, would she have such a carefree smile …?

Knowing that there was no error in entrusting Litoria to the servant of the goddess rather than to themselves, “Red Oath” felt relief.

Finally, today, March 15 (Fri), “I said make my abilities average!” 10 volumes are on sale!
Finally two digits!!
For the time being, get 10 volumes this weekend!
……Why the weekend?
That’s because Oricon’s first week’s sales are counted until the 17th (Sun)!