Tables and chairs, furnace with 3 cooktops, large pot, etc.
In addition, meat and vegetables, seasonings, sauces, and water barrels are pulled out one after another.

The three furnace cooktops had firewood in them from the beginning and were put on fire (light) at once by Rena’s fire magic.

Place a large pot on one of them and pour in water to about two-thirds with water magic.

Rena creates a fireball and gently sinks it into the large pot to boil water in an instant.

Meanwhile, Maevis cuts meat with a special knife made by Mile.
There are Orc, Venison, and more.

Vegetables that were washed and cut before putting in storage.
In addition, sausages made by Mile, boiled dishes and salads, and various other dishes and ingredients were displayed.

As expected, the most upsetting one seems to be the merchants.

「Not to mention, that kind of capacity …」(Merchant)

Dozens of kilograms (kg) for the water barrel (Taru) alone.
In addition to the ingredients and seasonings, tables and chairs, three furnaces and firewood, the weight would over hundreds kgs or so.

Merchant families, servants, and hired hunters are like:
“I want to hear!”,
“I want to ask!”,
But as expected, they know the basic rules of hunters, so they can’t ask anything.

And after the meals of the employers are ready,
“Red Oath” started preparing for their meals after everyone was seated,
They finished the preparation in a short time and started eating.

Of course, Mile constantly uses search magic to check if “the coast is clear”.
In order not to corrupt Red Oath with too convenient magic, Mile didn’t tell the other three, she just secretly uses it for the safety of the client…

Even if the adults refrain from doing it, it has nothing to do with the children.
The children of both families stood one after another and gathered around “Red Oath”

As their children gather around “Red Oath” and ask questions one after another,
Parents are fluttered for a moment then calmed down,
I mean, they are just young children,
Since more than half are still underage girls,
As expected, they don’t think the girls will get angry at the children for something like this, so they sit down again.

And, of course, that was correct.

「Um (E~e~to ne)
This is called “storage magic”
It’s magic that can carry a lot of luggage.
Look!」(Mile)

As Mile said that, she took the doll out of storage and handed it to the loli (little girl)

「Why are you carrying such a thing?」(Rena)

And Rena asks (retorts) while staring hard at Mile.

「Eh?
It’s a gentleman’s taste to keep boiled dried fishes and dolls so that you can give it to kittens and lolis at any time, right?」(Mile)

Maevis and Pauline look at the other two with the eyes like giving up everything.

The Loli (little girl) asked her so, Mile happily replied.

That was too much to take in, the merchants forgot to keep their calm and smiled involuntarily.

「Amazing (Sugoi)!
Then, are there any other things?
I want to see! Please take it out!!」(Loli)

When the lolis asked so, there was no way Mile could endure.
Understanding that, Rena and Paulin stopped (retort?)…

Large tents, bathrooms, and toilets made of rock emerged from the void.

The children are excited and the adults are shouting.

Then the children played in and out of tents, bathrooms, and toilets made of rock, and Rena’s group, who couldn’t keep up with Mile, shrugged their shoulders.

Then a loli (little girl) pointing at meat, vegetables, and sausages that are baked on a wire mesh.

Reply like some izakaya,
Mile served the roasted meat, vegetables on a plate, and gave it to the loli (little girl) after adding the sauce.

Yes, the loli’s request could not be refused.

And the other children who saw it flocked to Mile all at once.

The first loli pointed to the dishes on the table, not the barbecue.
It’s what Mile made in advance, dishes and desserts that she took out of the item box.

The mother muttered as she watched the Loli who was eating happily.

They aren’t planning to eat during a few hours of escort duty, and fighting with stuff in their stomach is dangerous because they will be slow down or it will become fatal when they are stabbed. For that reason, they didn’t eat any food before this mission.
So, it wasn’t because the dishes looked so tasty and smelled good, but rather, the capacity of that stupid (monstrous) storage magic.

Of course, the merchants and servants are the same…

Storage magic out of common sense.

Children were supposed to eat “quite good foods” prepared by the family chefs, but they completely ignored it and ate the dishes made by the hunter girls.

Interaction between the merchant couple has stopped completely, and silence is dominating.
The children are swelling up and behave badly,
They are talking about cooking with their mouth full of food.
…Should we say that this meeting was successful or unsuccessful?

Mile’s expression was melting because she was surrounded by a lot of children, but then her expression hardened.

She was still smiling, but her eyes weren’t smiling.

She stored all the dishes, chairs, tables, tents, bathrooms and toilets, and instructed the surprised children.

「Please go back to your parents for a while, okay!」(Mile)

Although they are still young children, they aren’t stupid.

Their parents usually gentle,
But when it comes to working, they have a serious face,
They all grew up looking at that figure and compromised.
So, the sudden change in Mile’s expression and her serious eyes seemed to make most of them aware.

Yes, Mile’s attitude resembled that of their father when the servant came to him with emergency news to inform.

So, the children nodded, pulled out their young brothers and sisters who didn’t understand well, and hurried back to their parents.

Mile shouting to the other party’s hunter party.

Now that Mile thought about it, she hadn’t heard anything about them, not even the name of their party.

If it’s a joint order, they must have been introducing themselves and specific skills,
Then everyone will decide the command role at the time of the battle.
But not this time, they are just “A party hired by different employers, who happened to be in the same place”.

The “Red Oath” side wasn’t sorry not to have such talk,
Because the other side didn’t want to do that.

Perhaps, in the end, they thought there was no point in making such adjustments with some newbies?
Or, they thought there should be no monsters or bandits in the immediate vicinity of the imperial capital?
At best, it was a job as repelling insects, like some stray horned rabbits, goblins.
Anyway, they didn’t care.

However, now that they saw Mile’s crazy storage magic earlier, they didn’t think Red Oath was just a newbie party.
An idiot who doesn’t notice it will be difficult to survive as a C-rank party.

So, without any doubts or objections, they ready their weapon in appropriate positions.

「Everyone, please be careful, they gathered near the river!」(Mile)

Say to the merchants, Mile’s group is also ready for battle.

After a while, about 20 men appeared.

They have crude, filthy clothes and the looks that don’t fit walking through the Imperial City.

They have a vile expression… cheap swords, spears and bows in hand.

… Yes, the Bandits are so typical that there is nothing more to say.

The unchanging bandits that often appear on mountain roads.

However, it is fairly unusual to be attacked by them so close to the imperial capital, even though the merchants don’t seem to be loaded.

(T.N: if I’m not wrong, Loaded is slang for Having a great deal of money)

Their purpose can only be kidnapping.

However, for the Red Oath, there is nothing to do with the thoughts or purposes of the bandits.

They fulfill their mission.

And that was all… 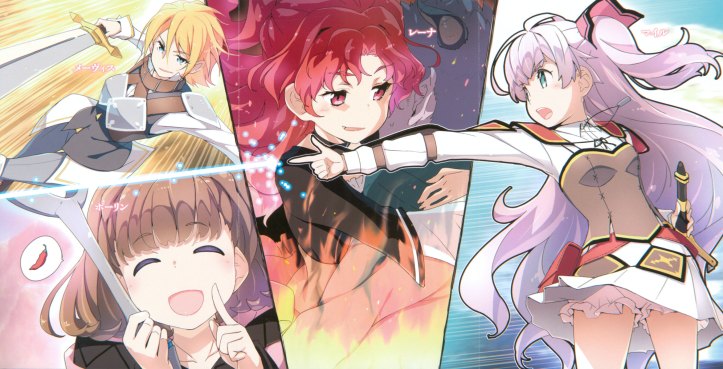