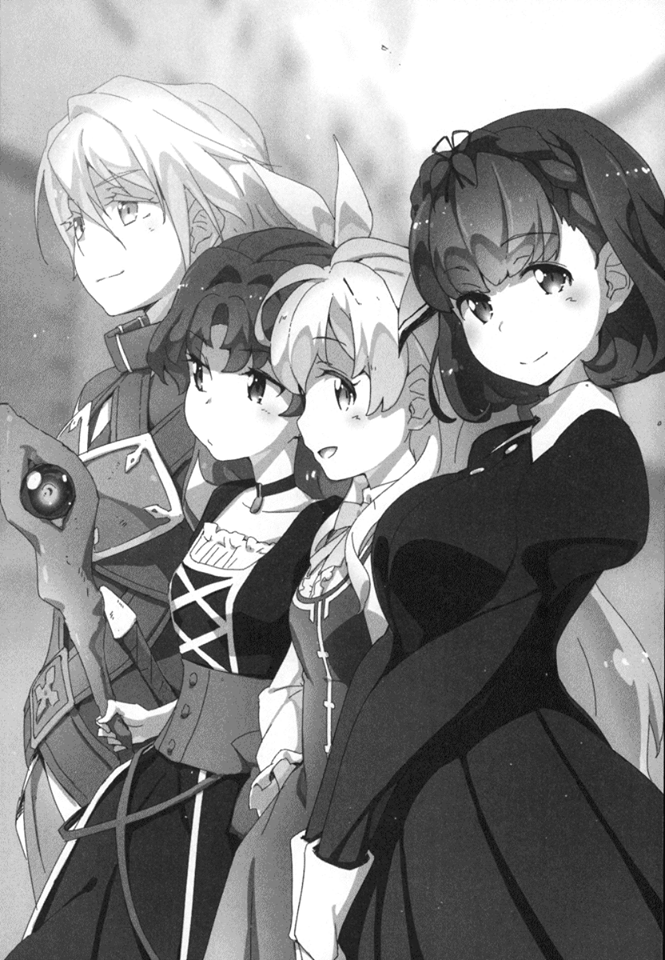 Mile:  will continue to translate some chapters to kill time waiting for Taru Batch released.

From now I will report the progress of other under-translation series.

When Mile’s group reported to the employer merchants, they rushed out and went somewhere, and then the stay in the Imperial City was extended by three days.

And in the meantime, it’s unknown if they did their own research or connected with another team,
The merchants seemed to have purchased information about “that place”, the exact location that not even Vebdel-shi knows. And finally, they decided to leave.

The destination is the mountainous area in the southeast direction of the Imperial City.

「Both Vebdel Company which runs by Vebdel-san and Dilabolt Firm which runs by the criminal Gareidal seem mainly doing business with foods that can be preserved and daily necessities.」(Pauline)

「… In other words, it’s military supplies.」(Rena)

Rena replied to the information Pauline had in her conversation with Mr. Vebdel before.

Because this is a big business opportunity that will continue from now on.
Perhaps thinking like that, the man named Gareidal rushed to commit the crime.
As a result, he didn’t do various preparations and investigations, and in the end, he got that outcome…

In the modern Earth, weapons and ammunition are the main sources of munitions,
But in this world, the only things that need to be replenished are arrows and spare swords.
Since they are in their own country, they know the water field accurately, and they can secure drinking water nearby.

They don’t attack other countries, so they don’t need Ram, Balista, hooked ladders, or rope ladders to attack a castle or citadel.

Also, since food can be purchased or resupplied from neighboring towns and villages, the amount transported from the Imperial City is not so large,
There’s not much concern about enemies attacking the supply team.

No bandits would be stupid enough to attack military supply units protected by escort soldiers.

As for the merchants, most of the products were sold out and re-stocked with luxury items.

It is unnatural to wander around the empire even though there are no products to sell, and in order to gather information on the spot, it’s necessary to have something to talk with people, a product.

And soldiers’ meals are provided by the military, and there is no shortage of food.
Because of that, the merchants target their favorite items, in other words, wine, appetizers, and confectionery.

But those things are not so bulky, so compared to when they left the royal capital of the Tyrus Kingdom, there is plenty of room in the loading platform,
Mile’s group can relax there instead of walking.

「What should we do, you said. If it’s the usual “pattern”, we have to explain the situation again and join in…」(Rena)

When Rena said that, Mile had no choice but nodded.

「Uhm, how about we mention the name of the Ancient Dragon…」(Pauline)

「However, can one Ancient Dragon to be the liaison of all the investigators of the ruins throughout the continent? ‥
Even though the ancient dragon can fly fast and has a wide range of motion, is it really that “Convenient”…?」(Maevis)

「Well, even if another Ancient Dragon is in charge,
It will fine if they can understand that human beings know the situation, isn’t it right? ‥
Without arguing, digging holes without permission,
If they are satisfied, they can lift it up and they are done.
Besides, the information about the last time isn’t only shared among the Ancient Dragons.
The devils and beastkin in the field might at least hear something, right?」(Rena)

Mile and Pauline are convinced with Rena’s reply to Maevis.

Apparently, there was no big problem.

…No, for the Tyrus Kingdom side,
It would be more convenient if the Alban Empire was crushed and exhausted…

In the first place, even in Vebdel-shi’s story,
He said, [It seems that the situation was changed in a panic when the preparation to “Munya-Munya” other countries was interrupted.]
The word that corresponds to “Munya-munya” can only be thought as “Invade” or “Raid”.

Mile and Maevis seemed to think of it almost at the same time.

*Eh*, Even Rena and Pauline are surprised but they are also convinced with Mile’s explanation.

「Well, we didn’t take any request to solve this problem,
me and Mile aside, the imperial invasion might direct involve both Maevis and Pauline’s homeland next…」(Rena)

For Mile, a nobleman of another country, and Rena, who is only temporarily living in the Tyrus Kingdom, it’s is not her home country.

However, even so, it’s not very pleasant to see their friends’ family, the people they know, the country they stay in, etc. getting harmed in war.
It would be even more unpleasant because they will do some extra things that accelerate the war.

「Then, we will just collect information,
We will not do anything that will help the Empire resolve the rumors.
Or, on the contrary, will we stir so that the message is expanded?」(Pauline)

As expected, it would be overkill to fuel the fight and expand it.
They have not received such a request, it’s just a war story.

「Well, it wasn’t decided that it was “that”, and it’s no use thinking about it now.
We spent a lot of time thinking, but when we went there, the situation was completely different,
It would a waste of time and effort, a big loss!」(Mile)

Did she respond to Mile’s word “loss”?
Pauline agrees with that.

「Well, I’ll keep my heart but…
Basically, we won’t run from any game/match/fight (勝負)! That’s us…」(Rena)

And seven days after the departure of the Imperial City, everyone arrived in the southeastern part of the empire.

In other countries, this distance can be reached in about 5 days,
But the road is bad because the height difference is large (mountainous area) and the highway isn’t well maintained.
When it rained, the road will become muddy for a while.

Even so, thanks to the magic of Mile’s group for when the wheels got stuck in the mud,
when the axle was broken, they can easily fix it.
It would have taken more days with an average corp.

In preparation for monsters and bandits, they normally need to have a large corp.

However, as the number of carriages increases, the probability of various troubles such as wheels, axles, etc. increases.

And the group can’t just ignore the wagon that has troubles, so every time the group has to wait for the trouble to be fixed.
Because it’s a bad road, trouble occurs much more frequently than the roads of other countries.

「Since the road is bad, it takes time for the business to operate, and extra expenses are required for that.
Then, the price of the product will increase, the probability of being damaged by monsters and bandits will increase, and the price will have to be increased more and more for risk management.
It’s a complete vicious circle」(Pauline)

「That said, the Alban Empire is big,
There are many slopes, there’s no money in this poor country and there will be no money to maintain roads nationwide…」(Rena)

In response to Pauline’s analysis from a merchant’s point of view, Rena, also a peddler’s daughter, replied.
Rena, who was already on a peddling trip by wagon with her father, was more than Pauline, who had never left her parents’ house as a young lady of a mid-sized shop, she knew more about the “Highway”

「Ah, it seems to be an army camp over there!」(Mile)

At the place where Mile pointed, there was a camp that seems to belong to the Alban Empire’s army, and there were rows of barnyards and tent warehouses. 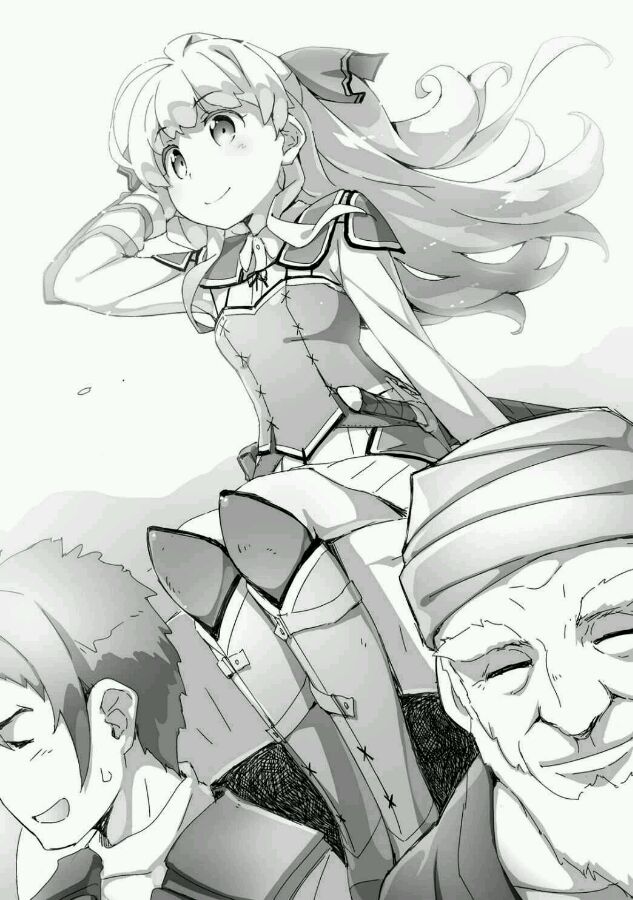