Cathy’s full ARC is about 40% completed. In the meantime let’s have some Mile’s Imouto Arc.

T.N: Yup, complain all you want, I won’t translate “Imouto” to “little sister”.

Therefore, Mile’s group refused to stay at Merlina-chan’s house but asked for permission to set up a tent in the vacant lot next to the house.

Then, Mile quickly took out the tent, toilet, and bathroom from the item box and installed it.

There is also a changing room, the peep preventing measures were perfect. Of course, the same goes for the toilet.

The name “fortification bathroom” and “fortification Toilet” aren’t just for show.
It can withstand a flock of Orcs’ attack so that you can safely use it without worry.

And there are things to do before bathing or going to bed.

…Not going to the toilet either.

No, of course, they need to go to the toilet before going to bed.

Naturally, it is a meal (dinner). And for that, cooking.

When the girls are tired or when they don’t have time, they will just eat the pre-made foods (it’s warm like it was just made)
Otherwise, they will make it on the spot every time.
For meat that is pickled will taste familiar.
Mile used “processed meat”, but they do it all the time in cooking programs, so there’s no problem.

While saying so, Merlina-chan came out of the house.

「…You, you set up a furnace on the windward side, now that I think about it you’re burning the sauce deliberately…」(Rena)

Maevis and Pauline already gave up and shrugged their shoulders lightly.

…They got used to it.

It was just that.

Merlina-chan shily asks, but there’s nothing wrong with it because it’s Mile’s plot. 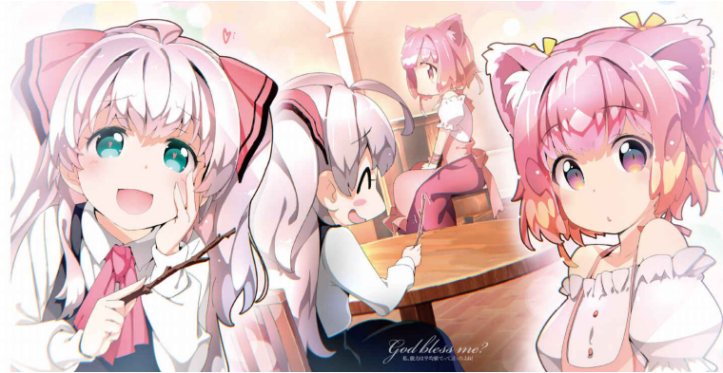 It was the usual Mile…

Somewhat scared, Merlina-chan ate yakiniku with sauce on the plate that Mile handed over.

And children coming out from everywhere, then adults coming out after that.

Apparently, the children were looking at it from behind their doors because it smells so good.
And when they saw Merlina-chan ate Yakiniku so deliciously, they couldn’t stand the temptation and jumped out.
Their parents rushed out after them.

Mile’s words cheered up the children.

「However, only children are free!
Adults are charged!」(Pauline)

It is natural.
Why do the girls have to serve food for free to villagers who have no connection or relationships?

That, of course, also applies to children.
But well, for Mile, other than using it on a daily basis, these foods are also a means for her desire which she doesn’t usually say about.
…And Rena’s group originally had a soft spot for children.

And indeed, not even Mile seemed to have intentions to feed adults free of charge.

Mile’s aim wasn’t to let the children eat.
That is just a means.

Yes, the real purpose is to have fun and be surrounded by children.
In order to fully enjoy the dreams that she couldn’t achieve in her past life…

She died as Misato when she was 18 years old.
Misato had already been treated specially by people when she was around the age of 4-5, so Mile wanted to regain her “fun childhood life” after ages 4-5 in Misato’s stead.
That’s why Mile is committed to playing with lolis.

…Of course, she is going to get back everything from 17 to 18 years old, because she is now at that age.

That’s why Mile is desperate to play with people between the ages of 4-5 and 12-13.
Especially young girls who she can’t play with until now…

As expected, even Mile seemed to have a common sense that she thought it would be a bad idea to play with a little girl after she reached 17-18 years old.

No, even at that age, she is still safe with a reason like “taking care of the little girl”, “watching over the little girl”.
However, “playing seriously together” would be completely out…

「Yeah, she was* a beauty and hard-working, but she had her shortcoming. I have to take care of her. She was* a “Ponkotsu (disappointed beauty)” sister…」(Merlina-chan)

For some reason, Mile is holding on her chest like having a heart attack.

Because Mile was upset, Merlina-chan’s word was cut off and Maevis asked again.

「Yes. The horse that pulled the wagon seemed to be surprised by something and was out of control.
She was trying to help a child…」(Merlina-chan) 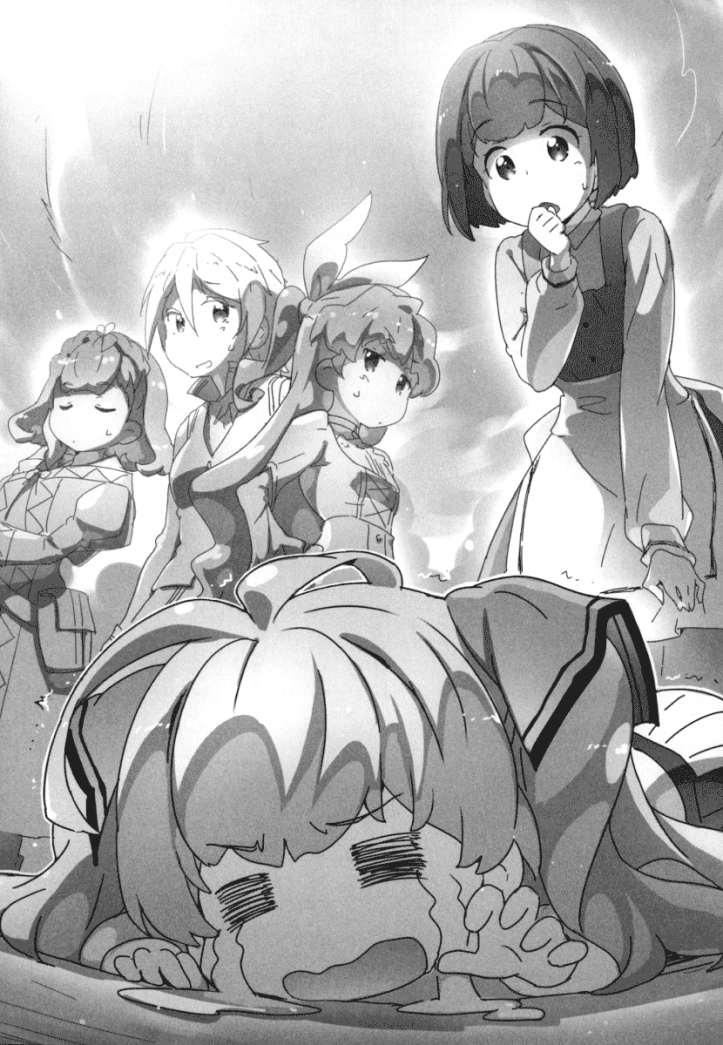 However, it was obvious that she didn’t have a sudden illness, so everyone ignored Mile.

「After my big sister died, I was trying to support my father and mother. It was hard days…」(Merlina-chan)

「Why did you take so much damage…?」(Rena)

Rena’s group strangely stares at Mile who is cramping on the ground for some reason.

And, while lying down on the ground, Mile cried “I’m sorry”.

「Onee-chan, I don’t have enough meat!」(Shota)

And without reading the air at all, a child asked Mile for a second helping of meat.
The child was cruel…

As Mile got up and restocked with food, Merlina-chan began to care for the other children.

And Mile was making noise again.

「Aaaah! She even gave off the same aura as Keiko」(Mile)

「Stop causing too much trouble for everyone!」(Rena)

After extraordinary dinner (BBQ party) with the children was over,
Red Oath cleaned everything up and pulled back to the tent.
And Rena rebuked Mile.

「But wasn’t Mile’s sister taken over by her paternal grandfather?」

Yes, if it’s Mile’s “younger sister”, it should be her step-sister, the daughter of the second wife.
And in fact, because she has the same father, Priscus should be Mile’s half-sister.

Mile didn’t tell Maevis’ group about the name “Priscus”, so she explained the outline of that.

「No, my Imouto is the little girl in the neighborhood!
You know, like girls often tell Maevis-san, “Onee-sama” and so on!」(Mile)

When Mile said that, Maevis couldn’t say anything back.

No, in fact, it’s normal for a younger child in your neighborhood to call you “Onee-chan”.
There are various ways such as “Grande Soeur and Petite Soeur” in Maria-sama ga Miteru. It’s not strange.

Mile has uttered various dangerous things, but no matter how many hints of that degree she leaks out, no one can think of Mile of anyone other than the Viscountess of Askham, let alone someone from another world who had died and reincarnated.

So this time as well, everyone just thinks it as:
“She had a cute Imouto who loved her when she was a kid… Mile is still a minor and is a fine “child” in many ways… So she was just confused when she encountered a girl who looked exactly like the one she knew…”
So everyone just leaves it as that.

…Mile’s eccentricity has been improved.