At the village mayor’s house where they girls were taken to, in front of the three Elves, Red Oath WAS apologized with 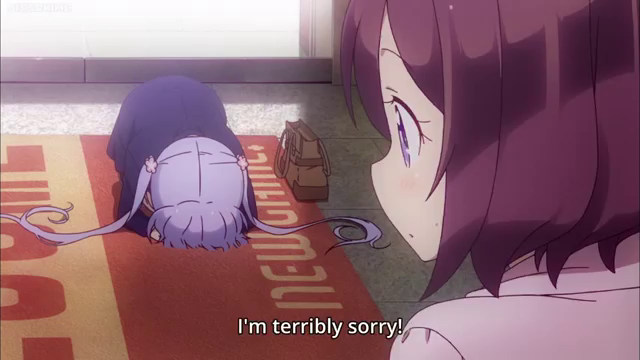 “Dogeza” BY the elf’s Trio IN FRONT OF other three Elves.

However, this will be a “GREAT WEAPON” In the future, when Dr. Kulereia and Etoul’s Duo CALMED DOWN.

And at this place, everyone currently is the Elf women trio and Red Oath, and there other Elves.

One of them is a villager Chief and also the owner of this house.
The other two are an uncle who is called the Elder and a man about 30 years old who feels like a fighting profession.
The man is probably an elder escort or something.

Of course, neither the man who looks like 30 years old nor the mayor has the same age “as they look”.

Ah, no, that “as they look” might be normal for the Elves, but not for humans.

Elves look younger for a long time in their life, even if the Escort man and the villager owner look about the same age, but they may actually be many years apart.

And the elder, who looks like an old man, might be really old.
It’s almost the end of his life for an elf, so his prime time has passed.
…Well, it would be strange to be called “Elder” even though he still looked young…

「No, it’s my bad.
I just instructed them to bring you to our village.
So naturally, I thought they would explain it to you and invite you properly.
But these girls were…」(Elf Elder)

As he was saying that, the Elder knocked the heads of the Elf trio with his cane.

「Well, well, let’s forgive and forget. Mistakes were made.
Because they are still naive (about 80-100 years old) children…」(Elf Chief)

The Elf Villager says that, but it’s a line that he shouldn’t say now.

「Idiots (Baka mon ga)!
Only the children of the human victims can say that!
The assailant side doesn’t have the right to say that in front of the victim!
Which one is naive?!」(Elf Elder)

Rena’s group felt a bit distracting with the Elf Chief’s words,
As expected, the Elder is more knowledgeable because of his age.
Seeing the Elf uncle apologized in a hurry to the words, everyone was in a good mood (became calmer).

「Speaking of which, to be honest, I thought it would be a problem if you refused…
The last time, when I tried to ask you about that strange magic in exchange for inviting you to our Village.
But you refused…」(Etoul)

What Etoul said was true, Red Oath started to remember things.
Back then, it seemed that the Elves were really excited.

Although their actual age is a few times more Mile’s group, they are all still a childish age for an elf. (T.N: you need to divide their age by 10)

The elf girl trio probably lives only about 10% of their lives. Therefore, it can be said that they are the position for humans under 10 years old.

(T.N: Rena’s Trio, you bully, they are lolies in a sense)

Mile decided to forgive the three Elves because they didn’t seem to have bad intentions.

*What’s with that?* Although they thought that, they weren’t in a position to say that, so the three elf lolies([simple_tooltip content=’the question mark is there in raws’]?[/simple_tooltip]) silently nod…

「…And the reason why the Elders wanted to see us…」(Rena)

After being apologized by the village Chief and the Elder, having Herbal tea and baked confectionery (made of corn-like powder and kneaded nuts and baked).
It was delicious and Red Oath started talking.

Rena also uses honorifics because the other person is an elderly Elf.

She usually talks with a high attitude so that she won’t be looked down with her height,
But for the time being, she speaks with honorifics properly.
In the past, she used to help her father and serve customers…

Besides, at this age that having an Elder appearance for an elf, it’s a level of “the ancestors of tens of generations ago” for human beings, and it is almost in the realm of God.
There’s no way she could behave rudely.

Suddenly, the elder sticks his face toward Mile and sniffs.

「Umm, it’s exactly like what Kulereia wrote in the letter.
What clan is your family?」(Elder)

Mile was shocked to hear it.

Three elf girls rage with the word “smell like an Elf”.

「All of you, can you calm down for a second?」(Rena)

It was a delicate topic for women, so Rena yelled in place of the Elder and the village chief, who were hesitant to speak for a moment.

「The story doesn’t progress at all……」(Maevis)

「…speaking of which, since we are the noble family, except humans I don’t think there is the blood of other races mixed for at least the last ten generations…」(Mile)

When Mile gave a similar explanation to what she had previously given to Beredetes, the Elder and the village Chief tilted their heads.

This explanation should have been heard by Dr. Kulereia at that time, but it wasn’t written in the letter report.

「But you have half the smell of Elf family… Ah no, not the real “smell”.
There is a sign or vibration, or something like that, but I certainly feel it…」(Elder)

The other elves, including the village chief, nodded to the words of the elder.

Maybe it’s because “God” put the data of the Elves and Dwarves into Mile’s “average value”. But it’s just a guess with no basis and there’s no way Mile can say that.
So Mile has no choice but to say so…

Continue after Shararil, the Elves saying their words of agreement one after another.

Mile is lying down on the table. *face table*

「As I said, the story doesn’t progress at all……」(Maevis)

And the words of Maevis echoed

It was unavoidable that Mile would take over as the moderator.
That’s the quickest way…

「First of all, I have no blood relationship with the Elves.
At least within ten generations…
Of course, non with the dwarves as well」(Mile)

The Elves nodded obediently to Mile.

The Elves just say “Somehow you feel like having that kind of atmosphere”.
It doesn’t seem to feel the same as the obvious “wave of an elf”.

She was born just a little bit like an elf, or just a little blood leftover from ancient times,
It seems that the Elves thought that it happened due to inheritance.

With this, one of the matters that the Elders were concerned about was completed.

Apparently, he thought that a half or quarter who belongs to his clan has appeared, he was worried that the said person would do whatever she wanted in the human city.

Leaking elf secrets that the Elves haven’t taught humans or top secret techniques that are only passed on to elder class and wise men.
He couldn’t stand such a thing being used up in public.
It seems that he was worried about that.

Also, for a human girl who aged 12 to 13 to use advanced magic that not even the elf in the fairy tale could use.
A magic that has never been confirmed to exist in the past or present.
They suspected the existence of “rejuvenation magic”.
…Very little, but they thought about it…

Even if the Elves have a life expectancy many times longer than that of a human, are they still interested in rejuvenation?

No, because they have live as a young person for a really long period of time,
Until rapid aging began (for elves, but still slower than humans),
There might have been a strong demand for it.

No matter how long you live and how bored you are,
This may be another problem…

「Then, the other matter…」

Yes, there was another report from the Elf trio, it definitely exists and it’s something very interesting.

A new one that can get rid of boredom.

And there is a possibility that it may be a secret leaked from another elf clan and a new magical technique that the Elves here don’t know.

That was the main reason why the Village Chief invited Mile’s group to the village when he heard about them.

On December 20th (Friday), the volume one of “Noukin” Blu-ray Disc will be released!

And the newly written short story.

Volume 3 “In Search of the Supreme Top”, “Power up”, “Public announcement” 6200 characters (equivalent to 2 episodes of “Narou”)

And the whole volume purchase privilege of “The girl named Kurihara Misato, Adel, and Mile” 8200 characters (equivalent to 2.5 episodes of “Narou”)

The personality of Mile and the reason for that biased story are revealed! !!  (^^)/

It is up to everyone to decide whether or not they are in the second season of anime.  (^^)/

(It has already been confirmed by the “Narou” management about whether or not to announce the release of the Blu-ray disc in the postcard.)