As expected, the girls couldn’t read such a letter out in the open.
So, Red Oath returned to the inn …

「Keragon-san wants to see us again.
This time, there is the top brass, including the patriarch and elders.
Ah, it seems like that child who called himself leader is excluded.
Beredetes is also excluded.
… In other words, it seems to be “an adult talk without children and young people”.
I think they want to have a proper talk about something.」(Mile)

「Even if the other side exclude all the children, we have a child on our side, is that really okay?」(Rena)

Mile in angry with Rena’s remark.
Out of everyone here, only 13-year-old Mile is a minor.
Pauline was 14 when they first met but she is now 15 and a proper adult.

Well, this out-of-common-sense talk won’t work without Mile so everyone knows that Rena is just joking.

「… So what is the purpose of the Ancient Dragons?」(Maevis)

Maevis has a serious look when she asks.
Yes, their counterparty is “that” after all.
Unless you are just stupid, or you are so nervous, you can’t make jokes in such situations.

And of course, Rena is the former.

She may have fought the Ancient dragons a few times.
…Without afraid losing her life.

…Accustomed.
But that was all …

Maevis’ Trio holds their breath and waits for Mile’s answer…

「I knew that would be the case!」(Rena)

「It’s within the range of assumption……」(Pauline)

「It’s not my fault!
It’s because of Keragon-san who wrote the letter like that!!」(Mile)

Well, actually, it might have been written by a devil or a beastkin, but what Mile rebukes isn’t wrong.

Ignoring Mile’s protest, Rena prompted Mile to explain the content of the letter to everyone.

「Well, he is going to guide us to the eight leaders, including the Elder and the Chieftain.
It seems that the place isn’t so far from here.
“The place that local people call the quiet forest” …」(Mile)

「Oh, it’s less than half a day from here.
Assuming that they flew straight from the Ancient Dragon village, they can come without flying over a big city on the way.
It’s a deep forest. If it’s near the center, there might be a human village nearby…」(Maevis)

Maevis thought that Mile probably didn’t know about the forest so she explained.

Hearing that, Rena has a face like “that’s it?!”

「No, it was the same last time.
There is no date and time specified, and the nuance is “If you read this letter, come right away” …
For the Ancient dragons, when they call, it’s natural for other creatures to rush immediately, prioritizing over any kind of errand,
And it’s natural for them to wait forever until we reach there, there’s no concept of specifying the date and time.
Keragon-san does a good job for us. Well, that part of Keragon-san is naturally ingrained in the body, maybe.
…so I don’t think there will be any bad」(Maevis)

Rena’s group is convinced that Maevis’ commentary is correct.

However, Mile seemed to have noticed something

「We had been away for a long time, right?
How long ago did that letter arrive?」(Mile)

This may be a little bad.

When Mile’s group deviated from the main road and reached the outer edge of the “Quiet Forest”, a beastman stood there yelling at them.

Behind him is a small tent for one person. On the side, there was a simple Kamado made of stone 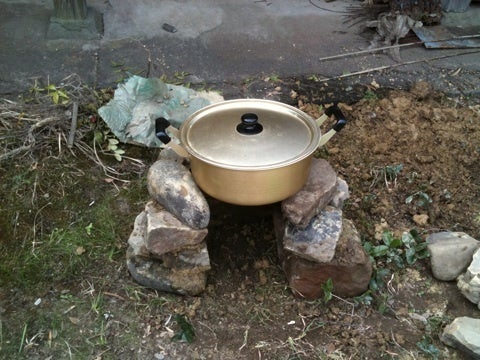 and a wooden dummy. Probably, he made it to practice sword to overcome boredom.

「How long do you want me to wait, stop joking around!
Unlike the Ancient Dragons who have a slow sense of time who can lay in the woods for days.
Do you know how hard it is to wait for days in a place like this alone?!
I’ve run out of food that I prepared. I wasn’t able to eat proper food for the past few days!
Why don’t you come right away?!」(Beastkin)

「It can’t be helped, you know.
We only came back yesterday from our trip to another country on request.
On the contrary, wasn’t you who sent that letter without confirming that we were absent or not?
You couldn’t just decide on a meeting without getting our consent.
Besides, you didn’t even decide the date and time.
Is it wrong for us to carry out the requested mission in another country without knowing that such a letter was coming?
Can you tell me what’s wrong and how bad it is?
Huh?」(Rena)

The beastkin Uncle is lost for words against Rena’s rebuke.
Certainly, there was nothing wrong with Red Oath.

「Alright, I get it, I get it.
Then, please launch three fireballs toward the sky.」(Beastkin)

However, even if they aren’t at fault, Red Oath still feels guilty, so…
They silently launching 3 fireballs.

And the Beastkin Uncle seems to be hungry, so Mile takes out food from the item box and hands it over.
When it comes to food, Mile won’t hold back.

A few minutes after launching the fireballs, nine shadows appeared in the sky.

It took rather long to think that they were somewhere in this forest
Perhaps they took their time to gather those who were sleeping or playing with animals.

The nice Ancient Dragon dragons landed with their earth-trembling sounds.

（Well, this time there was neither the brat-leader nor Beredetes,
Keragon-san will guide only the great men and the warrior corps…
There are no dragons… No, there is only one standing a little further away and his claws have the decorative that I carved.
That means…）(Mile)

Yes, he must be Keragon.

Well, it would be strange if it doesn’t “hit” when there are so many hints.

What’s more, Mile was pretty good at detecting the name of the other person by judging from the situation when she couldn’t remember the other person’s face. Yes, she had been doing it a lot of time when she was Misato in her previous life.

As for Keragon, he called her “Mile-sama” when they are alone. But maybe it was ridiculous to call an average human with “-sama” in front of other ancient dragons or something? He seemed to decide to call her “Mile-dono” this time.

Moreover, at this time, disturbing events are occurring in neighboring countries.
As expected, this is…

『Well, this time we came up with a very important request.
Here are the chief of our clan, the elders, and the six chiefs of the council.
And our request is…』(Keragon)

Gikuri* (gulp) Rena’s group is gulping down and holding their breath.

And the other eight Ancient Dragons nodded to Keragon.