After the Lunar new year, there are more works at my company.

I still don’t have free time like normal yet so I will release weekly (each series) instead of daily.

The number of chapters will be depended on the length of the chapters.

「Uhm. Maybe not, I can only touch Onii-chan after all, right?」(Loli Cathia)

What’s that?!
That’s certainly a problem.
Does that mean the clothes will slip through her?

This girl’s body is 17 years old since I was awakened.
Her mind and body were about a year old back then.

But her figure in front of me right now isn’t either of them (1 year or 17 years old).

「Wait a minute, this is your body, right?」(Cathia)

「My body had been given to Onii-chan and it accepted you as the main hosted spirit, right?」(Loli Cathia)

The girl smiles naturally as she speaks as a matter of course.

In that case, it’s strange that I’m keeping this body because it was given to you by your parents.

Such an idea is overbearing.

However, this girl is surely understanding that…

She is telling me so…

I hugged the little girl in front of me.

It can be transmitted without words.

We were together all the time even if we couldn’t talk.

I should have had a lot to talk about but when I saw this girl’s smile, I couldn’t say anything.

But I have to tell her this.

She gently hugs me with her small hands.

And there’s one more…

Thank you for being alive.

Ah, I finally calm down.

I have cried a lot recently.

As expected, even the soul is around 40 years old but it’s fragile…

「Onii-chan, are you thinking something strange?」(Loli Cathia)

「I understand why … but let’s get back to the talk?」(Cathia)

She tilts her head a little, I want her to take a look at herself.

「We talked about clothes just now. Why is it that way?」(Cathia)

「Ah I see. When I borrowed the body once before, it was really hard to walk」(Loli Cathia)

No, neither is my fault.
If I was careful about my health, the body would just grow up well on its own.

「So I thought a body this small was just right. And when I thought so, it became so」(Loli Cathia)

Fumu (Hmm)?
In other words, it depends on her imagination.

If so, isn’t it the same with clothes?

「Why didn’t you imagine clothes?」(Cathia)

What is this cutie?
I will have a sister complex at this rate.

「Then, let’s try it.
What kind of clothes would you like?」(Cathia)

「Is white kimono or dress the best in the world of Onii-chan?」(Loli Cathia) 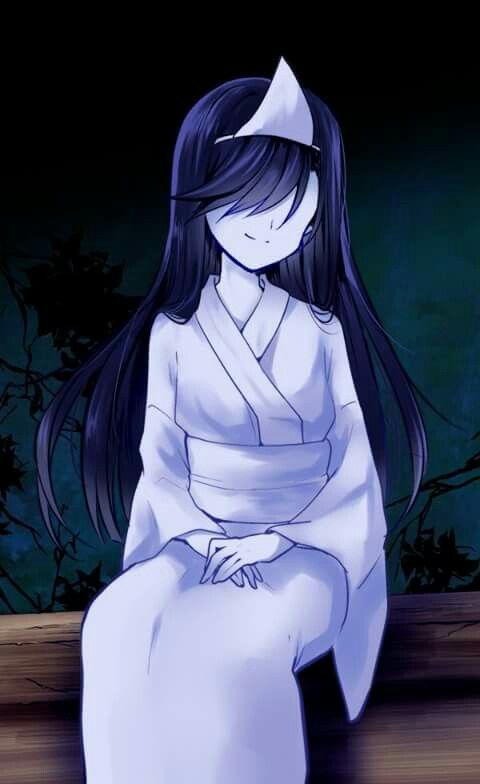 She is absorbing strange knowledge.
Well, isn’t it better than naked?

「…Should we try a dress for the time being?」(Cathia)

Her appearance is far from Japanese, so it’s better than kimono.

The body is wrapped in light with that reply.

When the light subsides, she becomes a red-haired girl in a white one-piece. 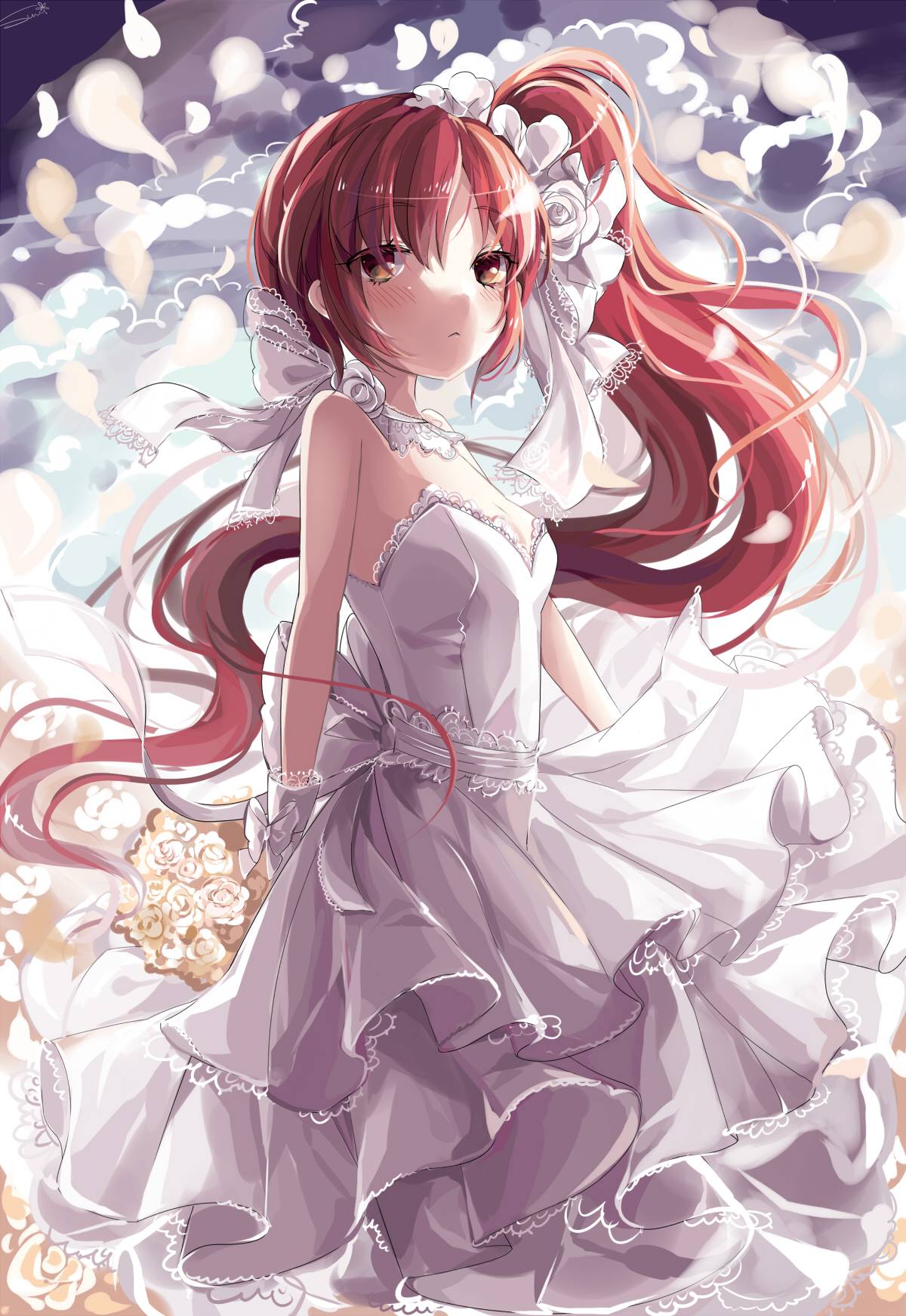 「Do I look good?」(Loli Cathia)

She is happily spinning around.

She is so pure.

However, isn’t this all-you-can-fashion-show without spending money?

「Speaking of which, Onii-chan.」(Loli Cathia)

「Give me a name!」(Loli Cathia)

…Ah, she definitely needs it.
A name, isn’t it?

「Do you have any preference?」(Cathia)

「How about Onii-chan’s name before? We will replace our name.」(Loli Cathia)

「No, a man’s name is a little… Hmm, but a Japanese-style name, right?」(Cathia)

I think it will be a problem to use a Japanese name.

She touches her hair as she says that.

「Yeah, it’s almost right.
A long time ago, my grandma–
Oh, it’s from my previous life.
She used to wear a madder-colored kimono.
She thought it would be nice to have a gentle red color.
…How about it?」(Cathia)

I’m glad she likes it.

“I don’t want such a name!”
If she told me so, she will break my heart.

「Onii-chan, are you thinking about something strange again?」(Akane)

Apparently, even when she doesn’t possess me, she can still read my feeling to some extent.

… Well, maybe I should take a break.

I removed the obstructive equipment, loosened my clothes, and lay down.

「Onii-chan, are you going to sleep?」(Akane)

「Um, I want to talk more, but let me rest a little」(Cathia)

Then put on a futon and good night…

「I heard that Cathia-chan has fallen!」()

Is it okay for me to stay in the futon like this?

I can’t hide forever anyway.
I just had to talk earlier than I expected.

I get out of the futon and call Fina-san.

「I’m sorry, Cathia… I tried to stop them quietly for you to rest」(Rumia)

「No… This is a good chance so I will explain to Neil-san and Lior-san as well.」(Cathia)

It seems that I have recovered to the point that I can stand and walk.
There doesn’t seem to be any trouble.

「Yes. But it’s unreasonable to keep silent.
Can I borrow a room somewhere?」(Cathia)

It’s too small here.
It wouldn’t be good to have more people.

「In that case, you can use the conference room we were in earlier.
I’ll bring them all, so you can take your time and come slowly later.
Hey now, let’s go, Fina」(Rumia)

Was the conference room over that way?
The voices of Rumia-san and Fina-san are getting farther away.

「Yup. I just need to go inside Onee-chan, right?」(Akane)

「Yes yes. It would be a problem if someone, who didn’t know the situation, could see you.」(Cathia)

When I patted Akane’s head lightly, she squinted like a cat. 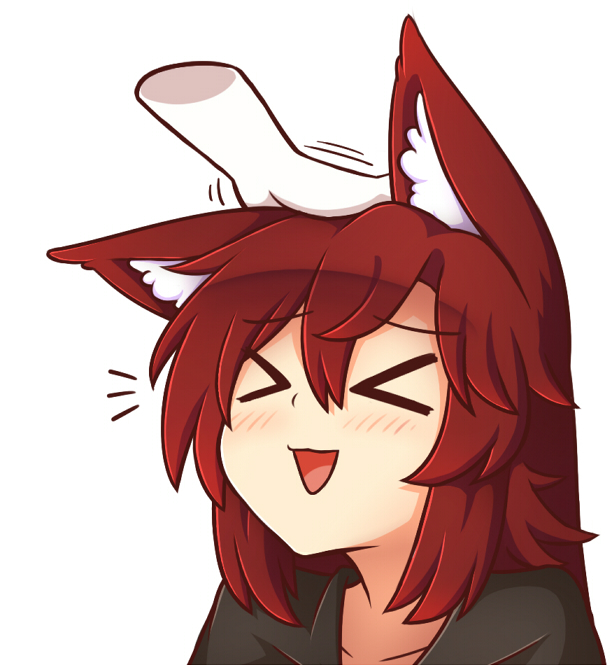 I explained the situation in the conference room, the three of them showed reactions.
I got a follow-up by living witnesses named Akane and Rumia-san, and then the explanation itself ended smoothly.

Lior-san has a stunned face.

「I thought you are a strange fellow but not this far.
Well, you’re still strong so I will let it go with that」(Lior)

So Lior-san said.
I’m very grateful that there’s no particular change in attitude.

「I’m sorry that I have kept silent until now.
…Is it unpleasant after all?
That my previous life was a man」(Cathia)

「No, that’s not the case!
…Ah, does Cathia-san still have a strong sense of being a man…?」(Neil)

Does that question have any meaning?
well, I will answer because I was asked.

「About that…
Do you mean about the body affects the mind?
Well, it’s easier to get emotions…
It’s not a bad thing, instead, I’m getting better at two or more things at the same time…」(Cathia)

Perhaps, in my case, I wouldn’t have been able to use dual wield if I remained a man.
In my previous life, I was pretty clumsy, and I couldn’t think of moving my two hands separately.

「I don’t know how much it is but I may be a little feminine mentally.」(Cathia)

Another question I didn’t understand.
He doesn’t seem to have any disgust with me, so I’m relieved.

She seems to be angry.

What should I do?

「I’m so angry…
How could you do something that may kill you silently?」(Fina)

That’s right.
There’s only one answer in return.

「Because after the fireworks of Cyrus, Cathia-chan wasn’t doing well.
I thought you were blaming yourself, but there were tears.
Before that, even at the time of the Earth dragon.」(Fina)

「I’m sorry I didn’t talk.
Fina-san didn’t do anything wrong――」(Cathia)

「Uum
But from now on, please talk to me properly.
Promise…?」(Fina)

What have I been doing?

She started painting when her mother died.

She is the same person as Rumia-san who knows the pain of seeing her dear people off.

I will make no mistake this time.
I firmly swear to my heart.

「Did you two have a fight?」(Akane)

Seeing how we apologize to each other, Akane said that.

No, this isn’t a quarrel.

「…Rather, this is how we reaffirmed the importance of each other.」(Cathia)

Fina-san put her arms over my shoulders while putting her weight on them.

Eh, I have a bad feeling.

Akane imitates Fina-san like a child.
It is strange that I feel the weight firmly for some reason.

But I want them to remember.
I’m still tired.

I think it can’t be helped so I say it.

「Come on, you two are heavy…」(Cathia)

「Ah!
You told the delicate heart maidens that they are heavy!
There will no second time, Kiyo-san (Ms. patent)!」(Fina)

After that, I was swayed by the two of them and became even more tired.

I had to return to my room with Lior-san carries me on his back.