T.N: *Ahem* May I shamelessly ask you to visit the new website?

This site has Word ads and the newsite has Google adsense.

Google Adsense paid better than Word ads. Well, it’s nice to get paid for my hobby no matter what.

Google adsense just accept me yesterday. You don’t need to do anything extra. Just want you to consider using the new website instead. 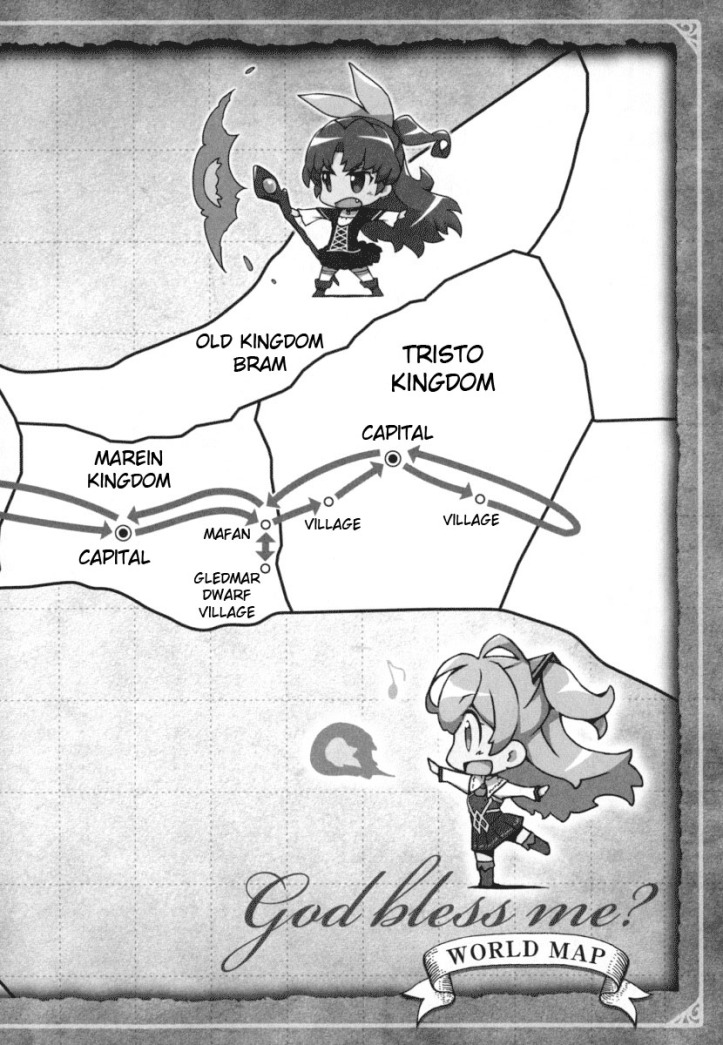 「No, it’s… NOTHING…」(Mile) (T.N: First half Mile talk in Hiragana, the second half in Katakana)

（By the way, I overlooked one thing … Nano-chan!）(Mile)

（Nano-chan, the group that I sent to cross-dimension-examination, I was told that they were connected to the sky above this world when they returned!
In that report, the metal golem over there… that robot was said to have fallen into this world!
If you collect it and examine the memory circuit…）(Mile)

【Unfortunately, that robot seemed to have judged that it couldn’t avoid suffering heavy damage in the middle of the fall, so it erased all of its memory.
After that, its power source went out of control and the circuit was burned out, then the self-destruction occurred.
Since the bottom was a trench, all the debris went into the deep sea…
Even if we recover that debris, would it worth anything other than “metal scrap”?】(Nano)

The clue that Mile thought off in her mind while lying in the bed was easily denied by the Nanomachine.

Well, since this is about the crisis in this world, it seems that the Nanomachine would have implicitly guided Mile if the memory circuit was in an analyzable state.
That route (warp gate) would have been closed.

【Regarding this matter, although it’s our policy to provide convenience to Mile-sama as much as the rules permit, our voluntary and positive interference with the different dimensional world and the manipulation of civilization and living things in that world are prohibited…
Therefore, except for attacks in the form of magical execution and analytical investigations on corpses and creatures that have completely stopped functioning. We can’t act directly according to our intentions… I’m sorry for that】(Nano)

（No, that’s how God… the Creator has instructed you, so I can’t help it. Never mind!）(Mile)

『…… it can’t be helped.
Because it’s the result of your own judgment and choice ……』(Elder or Senior Ancient Dragon)

Actually, when this Ancient Dragon saw the elite of the warrior corps and the Elderly Members of the council suddenly became popular after having cool decorations engraved on their claws and horns.

By all means, he wants it for himself and forces the warrior corps to give him the information of the artist.

However, the warrior corps had been ordered by the elders “Don’t bother her anymore”, so they refused to tell.

Of course, even if they weren’t ordered by the elders, the warrior corps would still want to monopoly the females like Keragon used to be for a while.

And then this Ancient Dragon thought…

『If they won’t tell me about the artist, maybe I should engrave it myself』(Ancient Dragon)

That was his thought…

If a tiny inferior creature like a human can do it, there’s no way that I, a great Ancient Dragon, can’t do.
With that in mind, he immediately started to act …

They are using a blade against it but the one that couldn’t last isn’t the “teeth”.

At first, he ordered the devils and beastkins to do it but they didn’t have enough power to engrave the claws and horn of the Ancient Dragon.
After letting a few people do it, the blade of the tool broke.

In the first place, the power of ordinary knives, devils, and beastkins couldn’t have scratched the claws and horn of the Ancient Dragons.
Even a great warrior tried to blow it with a great sword, it won’t be hurt …

Mile could do it because her power and weapon are abnormal.

…And the design drawings the devils and beastkins have drawn were crap in his sense of taste.

『EEi, that’s enough!
I was stupid as I expected from lower creatures!』(Ancient Dragon)

And he had no choice but to do it himself… but he thought his design was somewhat dull so he still hesitated.

However, as time passed, he became unable to dismiss, he carved his own claws and horns.
Resulting in…

It was a chaotic and distorted carving, and the tip was sharply broken, probably because he applied too much force when carving.

And that Ancient dragon was overwhelmed by despair…

『…It has become too annoying!
Just when I think that I’m getting a good atmosphere with females, they notice the line of sight with the guy who stares at me from the shadows, and the mood is ruined!
I heard the females screamed while escaping many times!!』(Senior?)

An angry councilor.
He has already passed about 80% of his life, but he still has hundreds of years left.
He didn’t seem to die yet.

『No, I think it’s your own fault, that is…
However, the claws and horn will grow if they come off.
I don’t know if he is afraid of pain and can’t cut it of completely!』(Senior)

Yes, if the claws and horn of an Ancient Dragon are removed, the new ones will grow.
The horns aren’t integrated with the skull but seem to resemble deer horns.

Of course, it doesn’t naturally come off and regenerate every year. But if it breaks and the root comes off, it will regenerate completely.
It’s unknown if it was originally made like that or the Nanomachine will automatically regenerate it with healing magic if it disappears from the root …

Similarly, the claws will grow if they come off.

Yes, that’s why Mile decided that it was okay in the unlikely event that she made a mistake for the carving.
If those things would never regenerate, it wouldn’t have been so safe.

Therefore, the said Ancient Dragon should also remove it to end this mess.
Yes, both claws and horn.

However, he doesn’t have the courage to do so because it’s quite painful to pull out the horn and nails. And he will be exposed as an ugly figure until the next claws and horn are grown.
In other words, he was “Hetare”. (T.N: pathetic, weak, etc.)

Well, it’s usually not possible for an Ancient Dragon to suffer severe injuries, many individuals have no immunity to pain.
And since the rumor that “pulling out your claws and horn is very painful” has been established, it can’t be helped that he is afraid.

『He is too pathetic, so why don’t make an exception and let the warrior corps bring him to “that”…』(Senior)

『No!
If you bend the rules like this, it’s hard to show.
If you set such a precedent, there will be a series of idiots doing the same thing on purpose…
Anyway』(Senior)

『Umm.
It’s too effective.
Their popularity with the females will increase and they will become popular…』(Senior)

Apparently, the carvings on the Claws and Horn are super effective,
It was like a cheat “Nikoponadepo”.

(T.N: I can’t find anything about “Nikoponadepo” beside a Japanese site talking romcom females fall in love with the male protag for no reason)

『Because it’s noisy, maybe we should let the females have their claws and horn engraved as well?
I’m in the state to say and listen』(Senior)

『Maybe your turn is at the forefront of the noise』(Senior)

『Your daughter and grandson are the preliminary of making noise!』(Senior)

『Don’t treat it like someone else’s business!
Don’t forget that your sister (Imouto) yelled at the council yesterday!』(Chief)

『She has already apologized for that!
Rather, it seems that the chieftain’s daughter is persistent and is a big nuisance!』(Senior)

… Apparently, the poor Ancient Dragon was unlikely to be rescued…

As I reported in the previous episode, “Noukin (Mile)” will be updated once a week for a while from this week, only at midnight on Tuesday.
So the next update will be a week later, next Tuesday at midnight.

… How long will the weekly update continue?

Well, Until the publisher gets angry. (^^ ゞ