Reni Novel Chapter 02: My family is in a big pinch.

Reni Novel Chapter 02: My family is in a big pinch.

Any person will die someday.
But I didn’t think it was Christmas.

I died with great excitement.
I dreamed of tomorrow and died.

I still wanted to enjoy the game more…

However, it seems that there are times when we are reincarnated―― 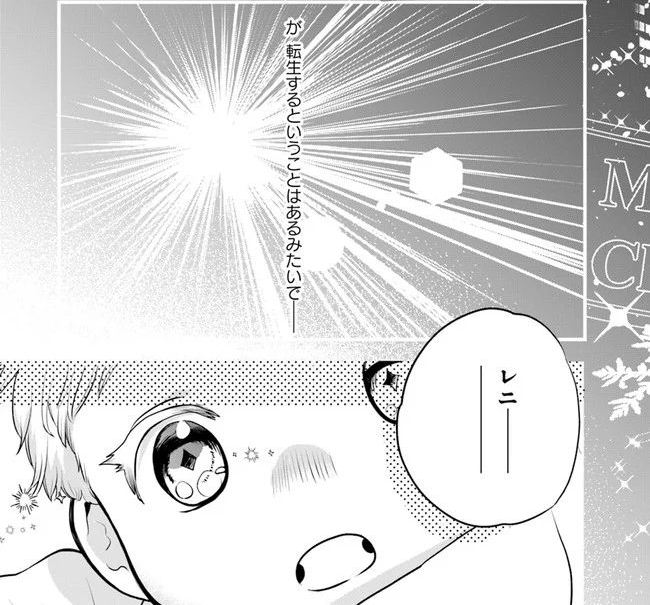 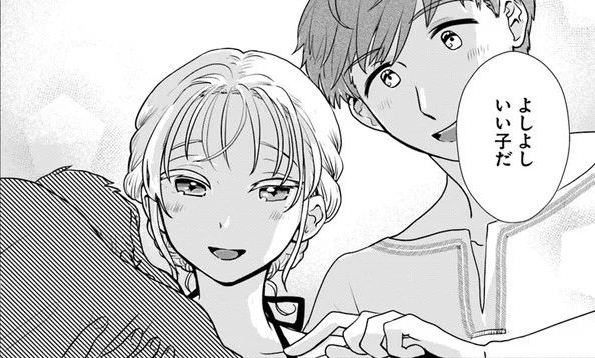 I was reborn with a new life while inheriting the memory of the hikikomori high school girl of the previous life.

Apparently, I’m really like a baby and I can’t control my body at all.

All I can do is squeeze my hands …
As for the five senses, it seems to be more mature than a normal baby. It’s clearly audible and visible.
I can taste and feel good.

The mother who picked me up was a really beautiful person with silver hair tied up and blue eyes glittering.

The father had brown hair and a featureless face but I think his golden eyes are beautiful.

I have silver hair from my mother and golden eyes from my father.

Overall, I look just like my mother and there’s no doubt that I will be a beautiful woman like my mother in the future!
I was born with the composition.

Yes. Just like the character in the game that I loved. 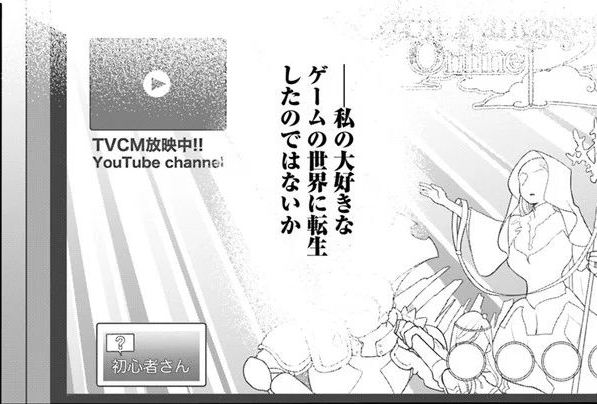 Of course, I’m still a baby girl now, so it’s more correct to imagine how I would look like when I was a kid with that character.
If I get bigger, I will definitely be the character I was using.

――Perhaps, this is my favorite game world.

――I think I was reincarnated there.

And that premonition turns into conviction.

At first, I couldn’t do anything with my baby’s body but I managed to stand and be able to crawl alone.

Even with the memory of a high school girl.
Even with the strong five senses, it seems that the growth of my body such as muscle strength is the same as that of an average baby around one year old.
It was quite difficult to speak, and I used to say only “Dar” and “Ah”, but now I can say this!

It’s important to practice pronunciation of the “Su” line, but at least it works. 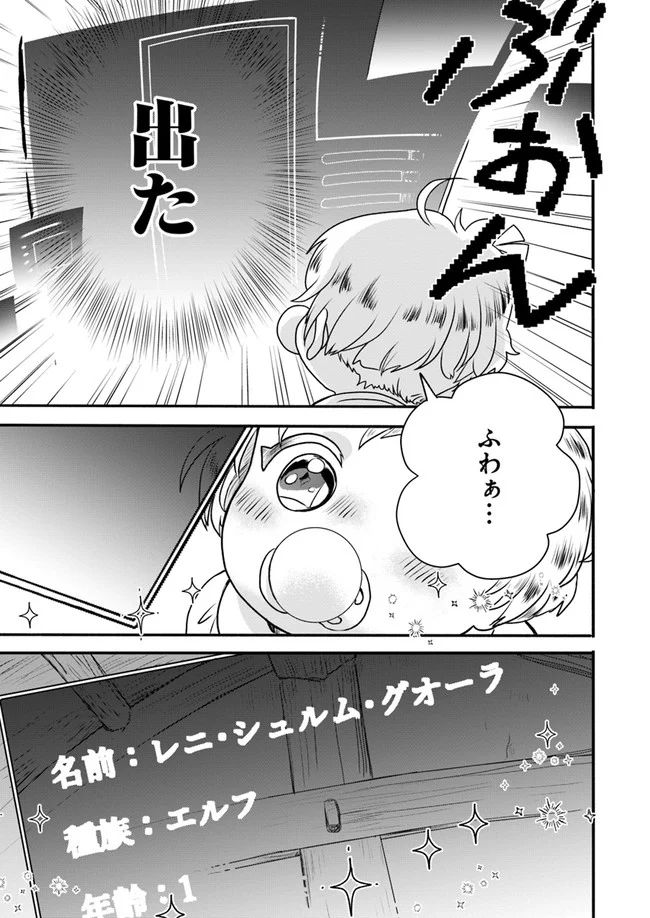 In response to the word “status”, the familiar screen display suddenly appeared in front of me.
It’s no wonder that I’m so happy to say aloud.

It was written there as follows.

Goodness Gracious! My level has already reached the counter stop…!

In addition to this, there are small values such as physical strength value and magical power value but they also reached the counter stop.

That’s because I kept increasing the maximum value for items etc. while playing the game――

The game data of my previous life has been taken and carried over to this world…! 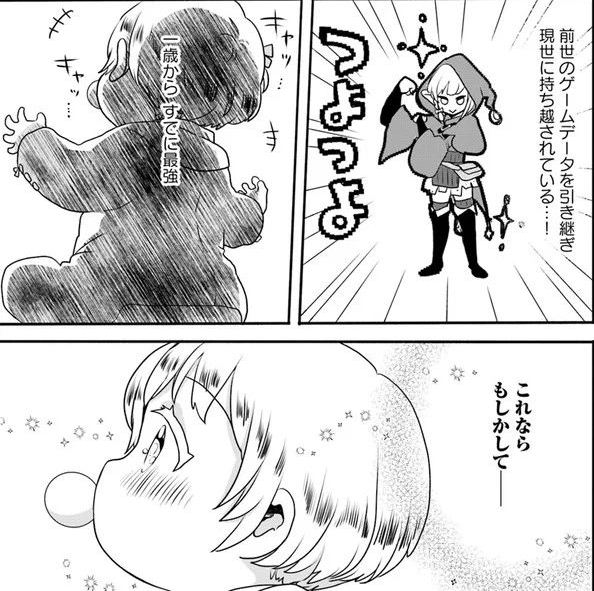 If this is the case, maybe–

As for the pronunciation of “bo”, I will practice it again.
Well, what happened in front of me is more important now.
Yes. This was also taken over properly.

Items lined up in a row.
Almost all of them were at the counter stop as well.

From the age of one, I feel like I already have everything in this world.

I involuntarily let out my admiration.

–This is the world of games that I love and I was reincarnated with the data.

If so, there is only one thing I want to do.

Let’s go on a journey! 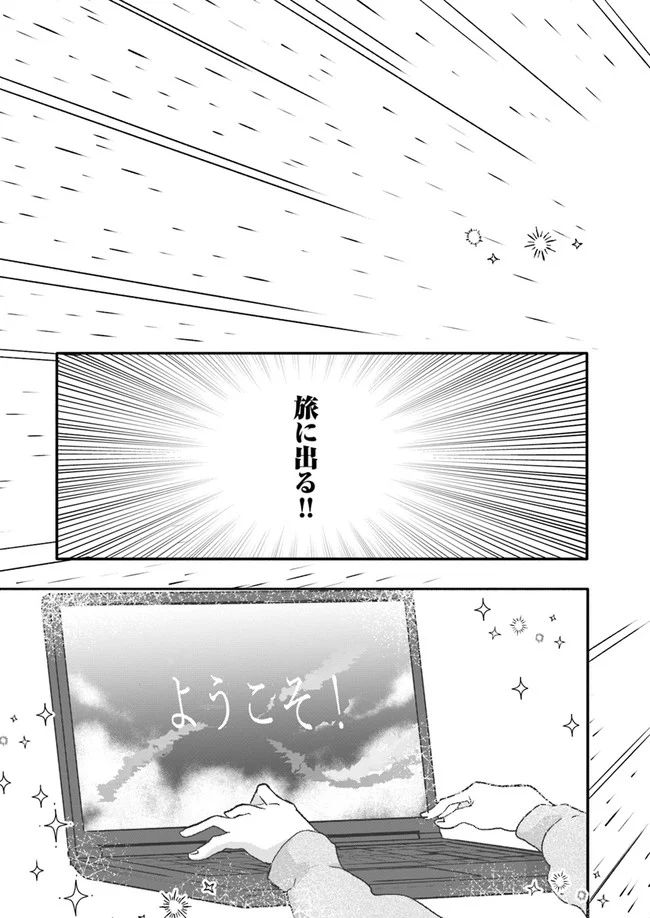 –A very beautiful lake in the cool rain.

What kind of color does the outstandingly clean water surface expressed in CG actually look like?

–A transparent forest that took a long time to clear.

How will the enemies imitate and trace this? How will their abilities work when we actually confront each other?

–A changing desert where the map changes every time

How do the dry winds and the falling sand actually change the terrain?

I want to see them all.
I want to know everything.
I want to enjoy this world to my heart’s content. 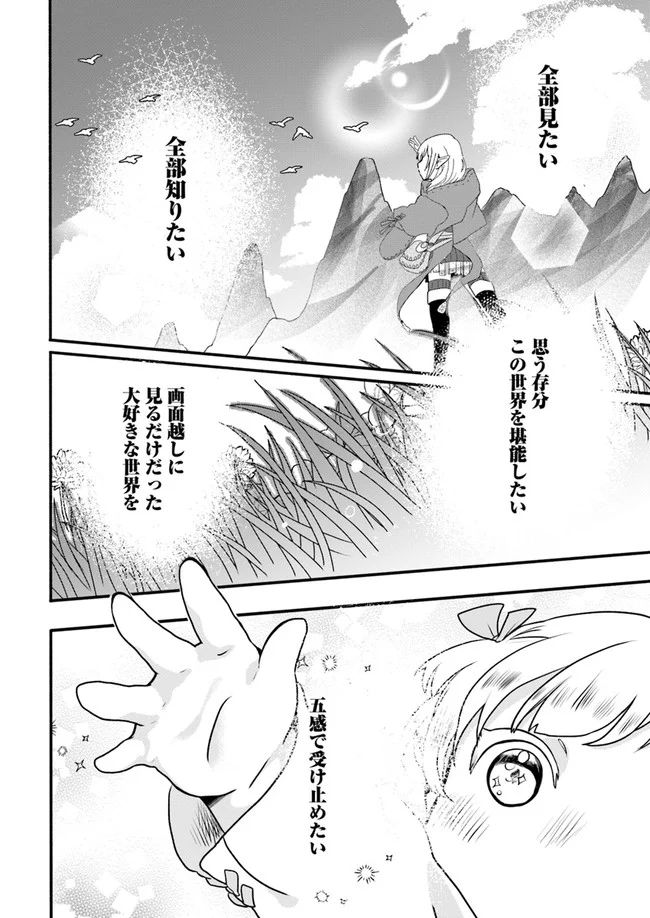 I want to take in my favorite world with all five senses, which I could only see through the screen.

That excitement I felt before I died revives.

Yes. There might be other jewels somewhere. I can travel while looking for it.

When I giggled, the crate of the bed I was leaning against squeaked.

Perhaps he responded to the sound, the man who slept in bed called me.

Weak voice. He called “Reni”, the name which was given to me in this world. 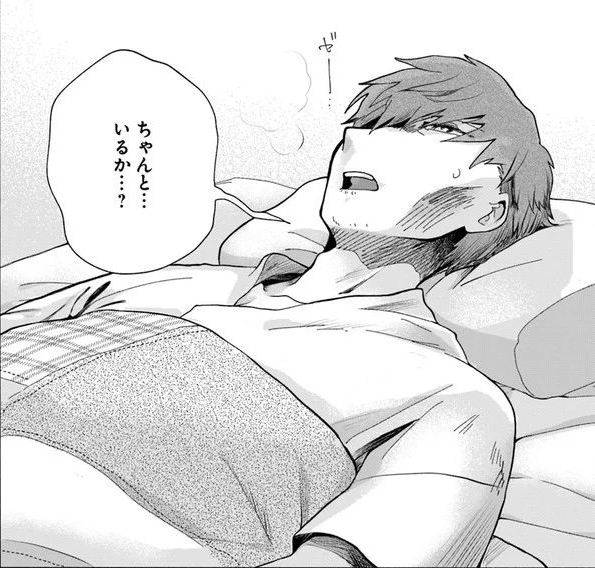 When I stood up, the man sleeping in bed-my father painfully opened his eyes a little.

His complexion is pale and his breath is weak.

–Yes. My father was ill.