When I heard the loud noise of knocking on the door, my mother, who was working in the kitchen, immediately flew to me.
And she opened the closet right next to me and pushed me into it. 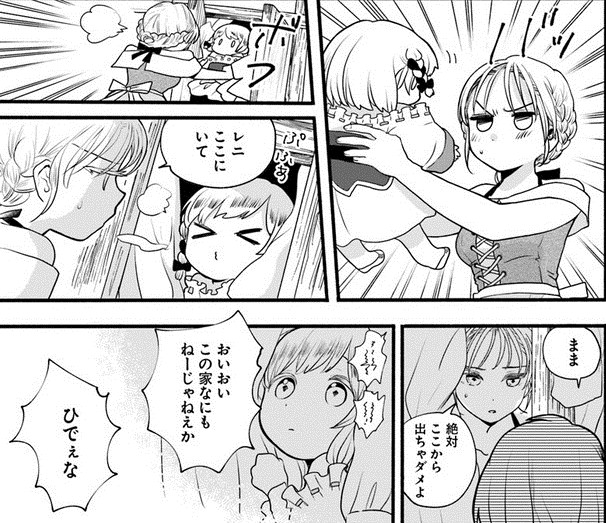 My mother reminds me with a serious face and quickly closes the closet door.
Immediately after that, pitch-black darkness spread.

The scent of clothes with another slight scent.
This is the scent of soap grass of B material harvest in the field.
My mother always uses it for laundry, so I put a lot in the improved field.

When I was smelling the usual scent, I heard a loud rattling noise and heard the footsteps of multiple people.
Apparently, my mother opened the door and the debt collectors come in.

「Hey hey (Oi Oi), does this house really not have anything?」(Man 1)

「Ah, this isn’t even enough for the interest」(Man 3)

*Gyahaha*, The dull laughter and the loud footsteps echoing on the wooden floor.
With this feeling, there are about three or four adult men.
Is my mother okay?

「The borrowed money should have already been returned in full.
You are told not to come home.
Get out of here」(Mama)

My mother was calm and resolute as it would be scary to deal with multiple adult men who looked down on her.

Maybe she didn’t want them to go into the house and planned to deal with them at the front door. But if they tried to enter this house, my mother wouldn’t be able to stop them.

Even my mother got angry and told them to get out of the house right away, the debt collectors just laughed and didn’t seem to care.

「Hey hey, is that the attitude of the borrower?」(Man 1)

「Did we even ask to borrow your money?
It was you who asked me to lend me some money!!」(Mama)

There was a sound of something breaking.
… I’m sure the broken one was the plate with bread on the table.

My house receives unsold items from a bakery in the village.
We can harvest vegetables, but we can’t get bread from the fields.

Bread that my mother went to work early in the morning and received as a favor.
Important… our important bread.

The debt collectors probably wiped the plate on which it was placed from the table.

「You see, the loan book is here.
It’s a borrowed book with your name on it.
What if we public it」(Man 1)

「… As I said, I paid all the amount written there」(Mama)

After the angry voice of the debt collector, something hit the closet and a loud noise was heard.

Perhaps the debt collector kicked the table and the blown table accidentally hit the closet.
At that moment, my mother shouted.

「Please stop it!
Stop rampaging at my home!
I already paid the money …」(Mama)

The debt collectors laugh at my mother’s words.

「It’s not enough.
Not enough!
However, there is nothing that could make money in this house.
… Oh, there’s one」(Man 1)

「Such a beautiful person would make money!」(Man 2)

「I’ve been saying this for a long time but because you don’t agree to it, so this is what happened.」(Man)

「Is it so hard to tell?
I’m telling you that if you sell yourself, you’ll pay the debt」(Man) 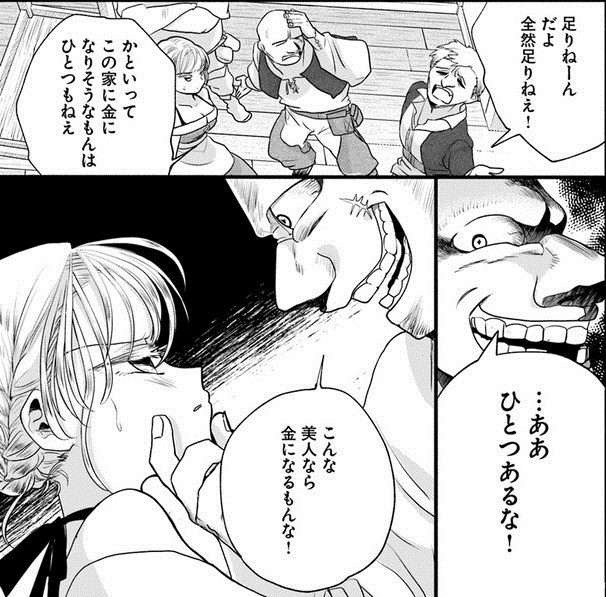 From the words of the debt collector, I felt that the direction of those words was suspicious.
This is that.
He said that we must pay with mother herself, not money.

Certainly, her mother is a beautiful woman. She is honestly a goddess.
It’s not strange that people want to get my mother’s body–

「Even so, it was a shame.
If you had a child and it was a woman, they both sold well.」(Man)

「I don’t think her child really dies? No matter how poor they are」(Man)

「You have prepared three chairs carefully.
Is it for a dead child?」(Man)

…Eh. I’m dead…?
No, does this mean that my father and mother decided to kill me …?

When I was confused by the sudden story, the footsteps echoed again.
Apparently, the debt collectors, who stopped before, have begun to move violently again.

And at the same time, I heard her mother’s breathtaking sound.

「If you don’t want to be unhappy anymore, come with us」(Man) 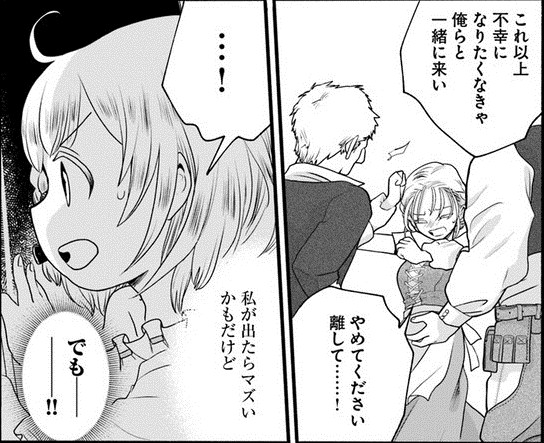 A voice mixed with my mother’s scream.
Perhaps she was grabbed by her hand and was about to be taken away.

It’s already the limit.
She locked me up in the closet because my mother wanted to hide me, but it’s impossible.

I wanted to think about things like “I’m dead”, but for now, that’s not the case.

–The debt collectors need to be removed.

I decide on my mind and push the closet door.
Then …

「What are you doing at my house?!」(Papa) 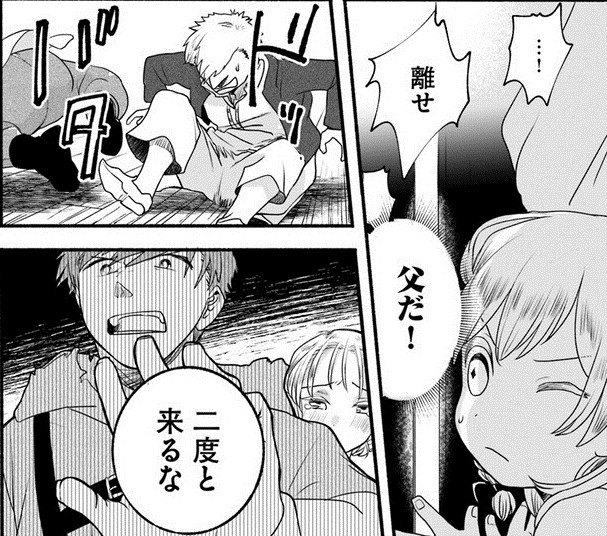 Along with that voice, the footsteps are intricately intertwined.
Rage and noise echoed, and–

My father’s voice seemed to be low and loud.
Very different from his usual gentle voice.

What I heard after that voice was the sound of something rolling on the ground.

I’m sure the debt collectors were kicked out of the house.
Father is strong!

So, getting out of the closet has been interrupted.
I muttered softly on the spot. 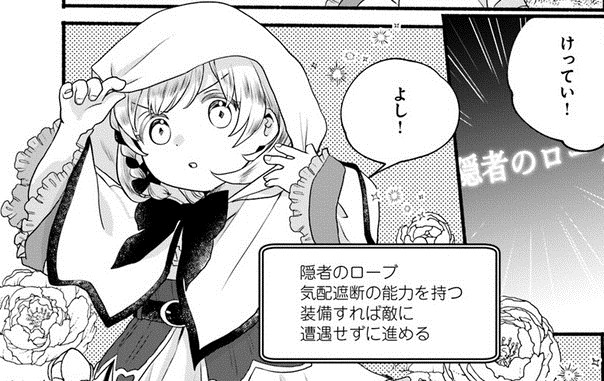 This is the equipment that has the ability to block signs.
In the game, if you equip it, you can advance the map without encountering enemies.

The three-year-old’s body was small, so I could cover it from head to foot.

In that state, secretly get out of the closet,
Write a letter to your father and mother saying “Leave it to me”.

When I went to the front door, my father was hugging my mother but he didn’t notice me passing by.

I feel like he was looking at me but I wasn’t called out, so I think this robe is a sign blocker, or transparent.

What I plan to do in this state is– 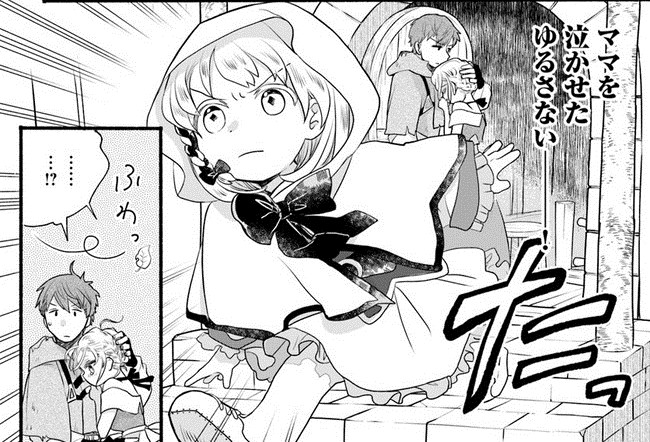