Calm down everyone, let the NCO explains why his soldiers didn’t rob the girls in front of his face yesterday.

By the way, this Chapter is in the NCO’s POV

Ranting: Gya… So many Refers… don’t make me search for it everything please FUNA sensei. My head hurts.

The officer murmured while marching.

Yesterday, the【Traveling Canteen Saintess Shop】 girls brought water and food to our soldiers just when we were in need.
Certainly, the price was expensive, but considering it’s what those girls brought with their lives, I can’t complain.
They were also saying about supply and demand, too.
Even if it’s the same item, but the price will be different from when buying in our Imperial city, towns, in the village of the remote area… no one can complain.

And as the Kingdom’s Army might still chase us, they had brought us hope and life for our soldiers with those water and foods.
It’s exactly as the Saintess in the shop name 【Traveling Canteen Saintess Shop】
Were those girls following our army from our country?
Or were they the daughters of those who have married to the Empire?
In any case, I am thankful for their help.

(T.N: I hope this will be enough to explain what readers argue in the last chapter)

While the NCO marching, he thought about such things, suddenly, the front unit stopped and the road was blocked with soldiers.

『The Front unit, what are you doing? The back became cramped…』(NCO)

As the NCO ran to the front shouting, something unbelievable reflected in his sight. 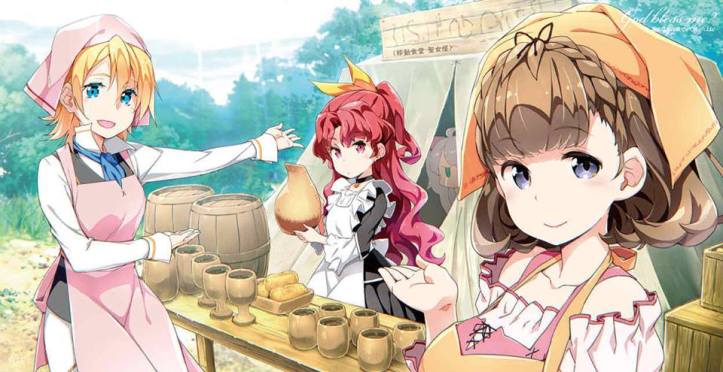 Ale and wine have disappeared from the sale.
Apparently, it seems that those things didn’t sell well yesterday.

I ran over in front of the tent and asked the girls I met yesterday.

『Oh, you are the one who helped us yesterday. Yes, what is it?』(Rena)

The redhead girl replied so, for now, I asked what I was concerned about.

『Yesterday, you sold water and food to our army, right?
If possible, I would like you to sell more for the soldiers who weren’t able to buy yesterday…』(NCO)

Maybe she didn’t get the question, I will explain then.

『No, I don’t mean that.
After confirming, I’ve heard that the soldiers only got around ten percent before the stock ran out』(NCO)

Because yesterday, after our soldiers finished, we didn’t stay in the vicinity of the tent but moved away to be efficiently handled.

I wasn’t able to confirm things around because the soldiers went back to their groups.

『So, you wanted us to keep selling until all soldiers of the Imperial Army could buy food and drink?』(Rena)

There are many things I want to say and want to hear.

But right now, I decided to ask another question I would like to ask earlier.

『… and what is that girl?』(NCO)

The place I pointed to…
Apart from three girls who sell water and food on the long table,
there was another figure that seemed to be a girl.

I used the word 《seemed to be》 because that figure somehow looks like a child with a donkey costume carrying objects on its head.

And on the head of the donkey costume, there was a dog, a cat, a chicken,
She was singing outrageous songs while playing instruments that I have never seen before…

『Ah… something like《If you want to sell water, you have to let me sing this song!》
Otherwise, I won’t give you any…』(Rena)

A redheaded girl explained such, with a face that she didn’t know anything.

The other girls seem to have a proper dress.
So there can’t be such thing as she has no money.

And the redhaired girl replied with a troubled face.

『If we sell water outdoor, we don’t have to be that way.
No, that child insists on wearing it, well, it doesn’t matter to us.
Anyway, those clothes are going to be scrapped, 《clothes to throw away》…』(Rena)

What!? I don’t understand the meaning at all.

『Well then, that creature and the dolls over her head …』(NCO)

『She said something like 《Music of Bremen》…
Don’t ask me!
Don’t ask me anything!
Because we don’t know the meaning as well…』(Rena)

The red hair girl refused to answer halfway and the two girls who are continuing to sell food and water were also confused.

Anyway, if I continue, it will only disturb the sales.
And that means a decrease in the withdrawing speed of our army.
But today the girls are able to handle people’s flow well from the beginning. There’s no need for me to help.
I should not disturb the girls anymore with my own curious question.

As the NCO thought so, he hid his doubts and curiosity in his mind instead.

As I said that, I lowered my head to the girls and ran back to the location of my troops.

And the next day.

It appeared before the NCO who kept walking silently with his troops again.

The officer became tired, shrugged his shoulder and muttered so.

『Well, we will sell things “bang bang”!
If it’s a small gold coin per customer, for 5000 customers it will be 500 gold coins!』(Pauline)

And yesterday, Miles who played a donkey, as usual, had been thinking about something else.

(This is a different world, and this tent is my temporary house which is a donkey.
A donkey with a temporary house.
… 【Roba Aru Kariie】 ? ) (Mile) (The nameless city)

Even though she was thinking about something like that, there was no one who could understand.

『Mile, why did you put both hands on the ground for?』(Rena)

Imperial troops on the way here knew full well, that the lower part of Ascham Land faces the border with the Empire,
The villages around the highway are unmanned, there is no food nor water, wells.

If there is no water or food at all, all await is just death, the soldiers who survive will one after turn into bandits and worsen the security of the Kingdom.

However, right now, they have a little free water that is created by magic.
And once a day, water and food obtained from silver coins and small gold coins.

With this, somehow the Imperial Soldiers can return home alive
Now, they don’t have to choose the way to become a bandit or can’t see their family again.
The Imperial Army was able to keep the military prowess at the last minute.

The 【Traveling Canteen Saintess Shop】 continued to sell water and food every day until the Imperial army crossed the border and entered the imperial territory.